Like the economy at large, the Thai labor market is divided: the agricultural dependent countryside and the industrialized cities with Bangkok at the forefront. Only a few percent of Thais are unionized.

More than a third of the labor force is found in agriculture, while industry and construction employ almost a quarter. The rest of the workforce is employed in the service sector, which includes the important tourism industry.

About a tenth of the workforce is made up of foreign labor immigrants, mainly from neighboring countries such as Myanmar (formerly Burma) and Cambodia. This group often works with poor conditions and low wages.

Unemployment rose sharply during the Asian crisis of 1997–1998 but has since declined gradually and is now low. The lack of well-trained labor is a major problem. 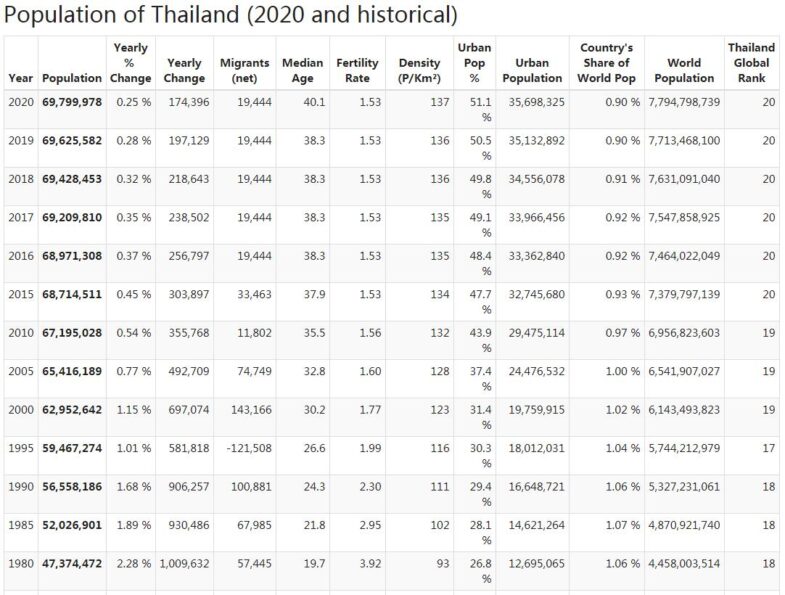 Only a few percent of Thais are unionized. In addition, the trade union movement is fragmented. There are just over a thousand trade unions and many only represent the workers of a single company. There are about ten registered trade union organizations. Public sector officials are not allowed to join trade unions. The union is fastest growing in the tourism industry.

In 1997, the government signed a UN Convention against child labor, but still thousands of children are forced to work, especially in rural areas. Many of them also work with housework. There are laws that regulate working hours, holidays, minimum wages and redundancies, but many employers are breaking the laws.

Rare murder charges in conflict in the south

Thai authorities indict two government soldiers for murdering three Muslim men in the south. The dead were civilians and did not belong to any of the insurgency groups in the area. Thailand has regretted the incident and said it was a mistake. The soldiers thought the men were rebels. It is very uncommon for the military to be investigated for crimes committed in the fight against separatists in the southern part of the country. In this case, the two soldiers must have reported themselves to the police in the province of Narathiwat (see also Conflicts, Southern Thailand).

Demonstration in support of Thanathorn

Thousands of people gather in Bangkok in a demonstration for democracy and in support of New Future leader Thanathorn Juangroongruangkit (see November 2019). The demonstration is the largest since the 2014 military coup.

Many civilians are killed in ambush in the south

At least 15 people are shot to death when two posts, guarded by civilians armed by the military, are attacked by suspected Muslim separatists in the Yala province in the south. The attack is described as the most violent in several years in the conflict in southern Thailand. No group takes on the deed, but several people are arrested in the police chase that follows.

More are dismissed at court

The king dismisses four high court officials. Two of them lose their jobs because of “adultery” and two for failing to keep the high standards of the court.

The king degrades the wife

King Vajiralongkorn cancels his wife Sineenat Wongvajirapakdi’s royal titles. Sineenat Wongvajirapakdi, who became a wife as late as July 2019, is also deprived of his military honors. Like Queen Suthida, the wife has a background in the king’s own bodyguard force. The reason for the decision is that the wife behaved unfairly to the king and that she did not understand the royal traditions. She should also have tried to challenge Queen Suthida’s status. Two days later, the king dismisses six officials within the court. King Vajiralongkorn has gradually strengthened his position since he succeeded his father King Bhumibol in 2017 (see Political system).

King Vajiralongkorn issues a decree which means that two army forces fall under the direct control of the court. The task of the forces is to ensure the security of Bangkok and central parts of Thailand. The king thus takes another step towards expanding his own powers of power. The decree is signed by Prime Minister Prayuth, who refers to the statute’s section that the king can issue decrees when the monarchy and national security are threatened. What this threat is about is unclear.

Bangkok gets the most foreign visitors in the world

In 2018, Bangkok received more foreign visitors than any other city in the world. It was the fourth year in a row that the Thai capital ranked highest on Mastercard’s annual list of cities in the world with the most international visitors. In 2018, Bangkok welcomed nearly 23 million foreign visitors, while the second and third, Paris and London, received just over 19 million visitors from outside. Other cities with top rankings were Dubai, Singapore, Kuala Lumpur, New York, Istanbul, Tokyo and Antalya in Turkey. The survey also shows that the number of international visits in 2018 had increased by 76 percent compared to 2009. Most money is spent by visitors in Dubai, while Bangkok is in second place.

Serbia has granted Thailand’s former Prime Minister Yingluck Shinawatra citizenship. This means that she can travel without a visa to over 100 countries. Yingluck was deposed in the 2014 military coup and fled his home country in August 2017 to escape a prison sentence that, according to her supporters, was politically motivated. Since then she has been seen in, among others, London, Dubai, Hong Kong and Japan. Yingluck’s brother Thaksin Shinawatra has Montenegrin citizenship but lives in London and Dubai.

Explosion during the Asean meeting

Dozens of minor explosive charges detonate at various locations in Bangkok, while Asian foreign ministers are meeting in the city, with US Secretary of State Mike Pompeo, among others, present. Four people are injured by the explosions. It is not entirely clear who or who is carrying out the blast attacks, but the police suspect that separatists from the south are behind (for background see Southern Thailand).

The King approves Prime Minister Prayut’s new government, which is taking office. Prayut appoints his closest husband, Prawit Wongsuwan, as Deputy Prime Minister while he takes care of the Ministry of Defense. Uttama Savanayana becomes new finance minister while Don Pramudwinai remains at the post of foreign minister. Anupong Paochinda becomes Minister of the Interior with responsibility for the police. The leader of the Bhumjaithai party, Anutin Charnvirakul, becomes Minister of Health. He is best known as the advocate for legalizing marijuana.

Parliament’s two chambers elect Prayut Chan-o-cha as prime minister. Prayut gets 498 votes against 244 for New Future leader Thanathorn Juangroongruangkit. The result is expected as the Senate’s 250 members are appointed by the military junta.

The senators are presented

The 250 new military-appointed senators are presented after being approved by King Vajiralongkorn. All are supporters of the military junta and the military-backed People’s State Power Party.

For Thailand will be the biggest party

The electoral authority announces the final result of the parliamentary House elections held on March 24. As many as 27 parties enter the Chamber, of which five receive significantly more seats than the others. Largest will be the Shinawatra-friendly opposition party For Thailand with 136 seats. The military-backed State Power Party becomes second largest with 115 seats. In third place is the newly formed anti-military opposition party New Future with 80 seats. The Democratic Party, which is divided in its support for military rule, gets 52 seats, while Thai pride takes home 50 seats. Two mandates are still vacant. The result means that the State Power Party only needs another 11 mandates from other members of the lower house to form a government. The choice has been accompanied by numerous complaints and accusations of cheating as well as claims for recalculation.

The king is crowned

King Vajiralong Barley (Rama X of Thailand) is formally crowned in the Grand Palace in Bangkok for three days (May 4-6) with traditional Buddhist and Hindu ceremonies. In villages and towns around the country, the Vajiralong barley’s portraits hang next to the father, the former king Bhumibol. Vajiralongkorn is the tenth king of the Chakri dynasty, who has been on the throne since 1782.

The King is getting married

Three days before King Vajiralongkorn’s coronation begins, the court announces that the monarch has married the deputy chief of his own bodyguard force. His new wife, who has been the king’s girlfriend for a long time, gets the title of Queen Suthida. King Vajiralongkorn has been married three times before and has seven children.

New leaders of the future are being prosecuted

The Party of New Future leader, billionaire Thanathorn Juangroongruangkit, is being prosecuted for rioting in connection with demonstrations in 2015. The party leader says the accusation comes from the military junta and is “politically motivated”. If convicted, Thanathorn Juangroongruangkit risks seven years in prison and loses his newly-won seat in Parliament’s lower house. A new future is part of the seven-party Alliance Democratic Front, which challenges the military-backed political camp in connection with ongoing government negotiations.

The opposition is gathering

For Thailand’s Prime Ministerial candidate Sudarat Keyuraphan announces that a “democratic front” has been formed between For Thailand, New Future and five small parties, including the Liberal Party, the Muslim-dominated Prachachat and the New Economic Party. Together, the front appears to have 255 of the 500 seats in the House of Representatives and thus be able to form government. However, the military-dominated Senate has the opportunity to interfere in the election of Prime Minister.

The choice is held, the result is delayed

When almost all the votes are counted in the House of Representatives elections (parliament’s lower house), the Election Authority announces that the military junta’s support party People’s State Power Party won 23.8 percent of the vote (119 of the 500 seats), while the opposition party for Thailand received 22.3 percent (135 seats). Many young people cast their vote on the newly formed party New Future, which takes home 17.6 percent (88 seats). Thai pride gets 11.1 percent (55 seats). The Democratic Party remains in the House of Representatives with 10.5 percent of the vote (52 seats). The turnout is 70 percent. With the support of the military-appointed Senate, the country’s armed forces continue to gain control of the policy. Among other things, Thaksin Shinawatra tells the media that the military has rigged the election and For Thailand claims that election fraud has occurred.

The king’s sister must not be a candidate

Thai Raksa Chart, a party with ties to the Shinawatra family, announces that the king’s big sister, Princess Ubolratana, is serving as its prime ministerial candidate. King Maha Vajiralongkorn quickly goes out and says the sister’s candidacy is “inappropriate” and later the Election Commission announces that Ubolratana is disqualified as prime ministerial candidate. Thai Raksa Chart accepts the decision. The message of the princess’s candidacy surprised many, especially the military and its support party, Phalang Pracharat, as the armed forces motivate their political power by protecting the monarchy, among other things. Thailand is a constitutional monarchy where the royal family is to play a ceremonial role only. Ubolratana has renounced its royal title, but has close ties to the royal house.

Elections will be held in March

The Election Commission announces that general elections will be held on March 24, 2019. The decision is made public through a decree from the King. Although the election really does go away, the new civilian government will be limited in its exercise of power by the constitution adopted during the military’s post-coup power.

A few hundred people walk out onto Bangkok’s streets, protesting that the country’s military-backed government has signaled that the general election should be postponed a fifth time. The last election date set by the authorities is February 24, 2019.

The EU removes Thailand from its list of countries threatened by sanctions if they do nothing to stop illegal fishing in their waters. Once the EU has established that Thailand has endeavored to prevent unsustainable, illegal fishing, the country is removed from the list. Thailand, which was listed in 2015, is the world’s third largest exporter of seafood and the EU is the world’s largest importer of these products.