Biggest Tsunamis in the World

The largest tsunamis in the world present in this list are measured taking into account their maximum height and being a phenomenon difficult to measure, all values ​​presented are estimates as close as possible to reality. The largest tsunamis or highest tsunamis in the world are called mega-tsunamis. The biggest tsunami or the highest tsunami happened in Alaska, in Lituya Bay, with a height of more than 500 meters. With half of the highest tsunami in the world , it was the 2nd one that occurred in Spirit Lake, also in the United States of America. The eruption of two volcanoes led to mega-tsunamis in Southeast Asia and Europe, a landslide caused one of the greatest catastrophes in memory, flooding several localities, after a dam failed to contain the fury of the waters. The numbers and these events are the most recent and the ones that have the most reliable numbers, not counting for this purpose, other phenomena of the kind.

Top 5 of the World’s Biggest Tsunamis

In 1883, the eruption of Krakatoa created a 42-meter-tall mega-tsunami near Sumatra and Java, Indonesia. 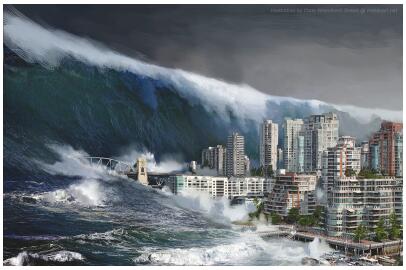 In 1972, the eruption of Mount Unzen caused a landslide that caused a mega-tsunami 100 meters high.

A landslide over a dam caused the dam to fail to withstand the water level and this caused a 250-meter high tsunami that devastated several Italian towns around it.

In Washington State, the eruption of Mount Saint Helen caused a mega-tsunami in Spirit Lake that reached a height of 260 meters.