Most Tanzanians have no formal employment but work in the informal sector of the economy. Two thirds of the workforce are found in agriculture, one quarter in the service sector and the rest in industry.

Unemployment is high, especially in the big cities. The age group of 15-34 years is the hardest hit, and the worst is for young women. Eighty percent of the workforce is low-skilled.

Trade union rights are enshrined in the country’s legislation and strikes occur. However, employees’ union rights are often violated, especially after 2015 when Tanzania faced a harsher political climate (see Current Policy). In the mines, working conditions are particularly bad. Child labor is lost. In the 2010s, however, thousands of children were rescued from dangerous work in illegal mining and put in school. 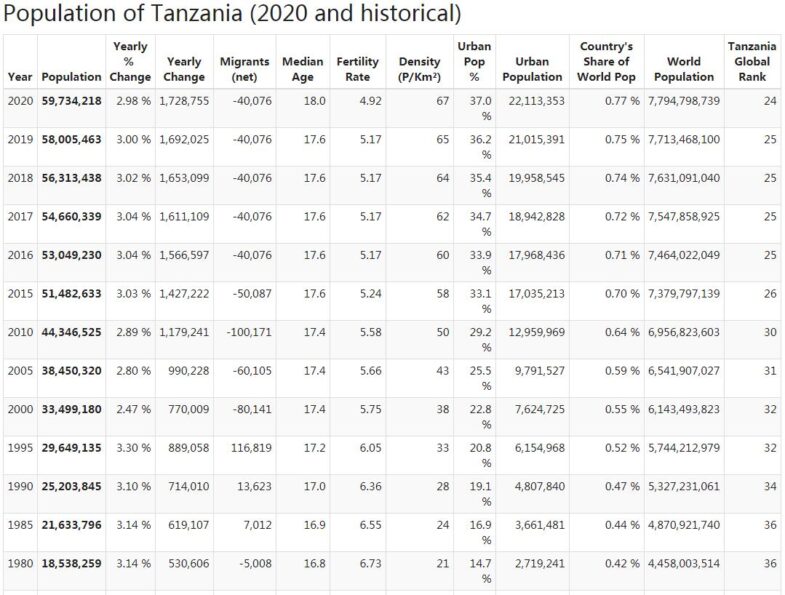 There are two country organizations: the Trade Union Congress of Tanzania (TUCTA) on the mainland and the Zanzibar Trade Union Congress (ZATUC) in Zanzibar. The trade union is working hard to strengthen the women in the labor market and to try to organize the people in the large informal sector.

Six opposition parties, including the four represented in Parliament, are doing joint action against President Magufuli’s “dictatorship”, they write in a press release. They accuse the government of having started a war against the opposition parties, which now announces that they will fight to save democracy and regain the rights that have been deprived of them by Magufuli’s breach of law and constitution.

The Chadema leader is being detained

After not appearing at court hearings on November 1 and 8, Chema Leader Freeman Mbowe, along with MP Esther Matiko from Chadema and seven others, are arrested. They are being prosecuted for an illegal demonstration that claimed a person’s life (see February 2018). Mbowe, who is being held in custody, says he was ill at both hearings, while Matiko defends herself when she was abroad on a political mission.

International lenders hold millions of dollars in loans and assistance to Tanzania because of the persecution of LGBT people and the government’s increasingly authoritarian leadership style. The World Bank is canceling its plans to lend $ 300 million to the country because of a ban on pregnant teenage girls from going to school, as well as new legislation that penalizes anyone who questions government statistics.

The army is ordered to buy all cashews

President Magufuli orders the army to buy up Tanzania’s entire harvest of cashews after private buyers refused to pay the price the government put on the nuts. In October, Magufuli doubled the price of cashews, which is one of the country’s most important export crops, after the farmers complained that the then price did not cover production costs. The State Agricultural Development Bank receives orders to release money to the army for the big acquisition. The factory where the nuts are stored and processed will be taken over by the army. The Minister of Agriculture and Minister of Commerce is being kicked for failing to fulfill its obligations to the growers.

The government distances itself from witch-hunting for gays

The government waives Dar es Salaam’s governor’s calls for Tanzanians to report suspected homosexuals in the city ahead of planned mass arrests (see October 2018). The Foreign Ministry emphasizes that the call is not Tanzania’s official line, but Governor Makonda’s personal views. The Foreign Ministry adds that Tanzania will continue to respect the international human rights conventions signed by the country.

The governor calls for the persecution of homosexuals

Dar es Salaam Governor Paul Makonda, who is close ally to President Magufuli, urges Tanzanians to report suspected homosexuals ahead of planned mass arrests scheduled to begin in November. Makonda says that gay behavior “treads on the moral values ​​of Tanzania and on our two religions Christianity and Islam”. Amnesty International says plans to persecute and arrest suspected homosexuals are leading the country on a “dangerous path”. The rhetoric of powers against gays has hardened significantly since Magufuli’s election victory in 2015. Homosexuality is illegal in Tanzania, where sexual acts between two men can give life imprisonment.

The opposition party Chadema decides to boycott elections held in the country for the time being. The reason is that the authorities have “militarized” the electoral process, which according to Chadema became clear during the election elections to two seats in parliament on 16 September. When the filling elections were held, the military presence on the streets and at the polling stations was great and turnout was low. Chadas chairman Freeman Mbowe says several representatives of his party have been harassed and arrested. He adds that “democracy has been taken hostage” and that “going and voting is like going to war”.

Freeman Mbowe, leader of the country’s largest opposition party Chadema, is being charged with five party comrades for spreading hatred and unrest. The reason for the prosecution is, among other things, that in a speech in conjunction with a demonstration, Mbowe said that President Magufuli will not be long-term in his job. Just under a week earlier, a driver and a farmer were detained, who were accused of calling on their countrymen to take part in a nationwide protest on April 26. The Dodoma Police Chief says the arrest of the two should serve as a cautionary example to others. He adds that anyone who goes out to demonstrate in April risks getting their legs broken and returning home as a shrink.

Tanzania is one of 44 countries to sign a Free Trade Agreement at the African Union Summit in Rwanda. The agreement must be ratified at the national level before the AFCFTA free trade area can become a reality, but it is seen as a historically important step towards increased trade exchange within Africa.

Opposition is condemned for slander by the president

Joseph Mbilinyi, MP for the Chadema opposition party, is sentenced by a district court to five months’ imprisonment for defaming President Magufuli. Mbilinyi is slammed for holding a “hate speech” about Magufuli in December 2017.

More than 100 NGOs and action groups sign a rebellion against the human and democratic rights violations that the signatories believe are ongoing under President Magufuli’s rule. The call refers to “many abuses that are unparalleled in the country’s history including attacks, torture and kidnappings that have affected legal activists, journalists, political leaders and even ordinary citizens”.

A 22-year-old student is killed by a shotgun bullet from a police officer during a government-critical protest march in Dar es Salaam.

A leader of the opposition party Chadema has been found dead after he was kidnapped by men in a car in the country’s largest city Dar es-Salaam. A friend of the murdered who was also kidnapped says they were taken prisoner and tortured by men who wondered why they were working for the opposition. A spokesman for Chadema accuses the CCM government of kidnapping and murder. Ten days later another leader of Chadema is hacked to death outside his home in central Tanzania. The murderer had been involved on the part of local residents in disputes over land with representatives of CCM. This murder also blames Chadema on CCM.

Criticism from the Catholic Church

The country’s Catholic bishops in an open letter accuse President Magafuli of violating democracy by restricting freedom of speech. Party political activities, such as meetings, demonstrations and debates, have been banned until the next election, the bishops write and warn of the consequences if this continues.

The President keeps the Constitution

CCM government announces that President Magufuli has no plans to change the constitution and extend the term of office from 5 to 7 years, as some party members suggested.