South Korea’s traditionally low unemployment rate rose sharply in the wake of the economic crisis in the late 1990s, but it declined again the decade after that.

During the military regime (1961–1987), wages were kept down and attempts to form independent unions were defeated. After 1988, the government allowed independent trade unions and remained more neutral in labor market conflicts. Subsequently, wage increases became significant.

However, some professional groups, such as teachers, have long been prohibited from forming independent unions. Employees in government companies, defense industries and government agencies have been exempt from the strike law.

KCTU (Korean Confederation of Trade Unions) and FKTU (Federation of Korean Trade Union) are the two major trade union organizations. Both have been combatable, especially KCTU.

The unions have lost half of their members since the end of the 1980s and organized about a tenth of the workforce by the middle of the 2010s.

The unions often state that they have been subjected to harassment and increased pressure from the state power in recent years. Several trade union activists have been imprisoned for shorter or longer periods because they demonstrated without permission or resisted police. 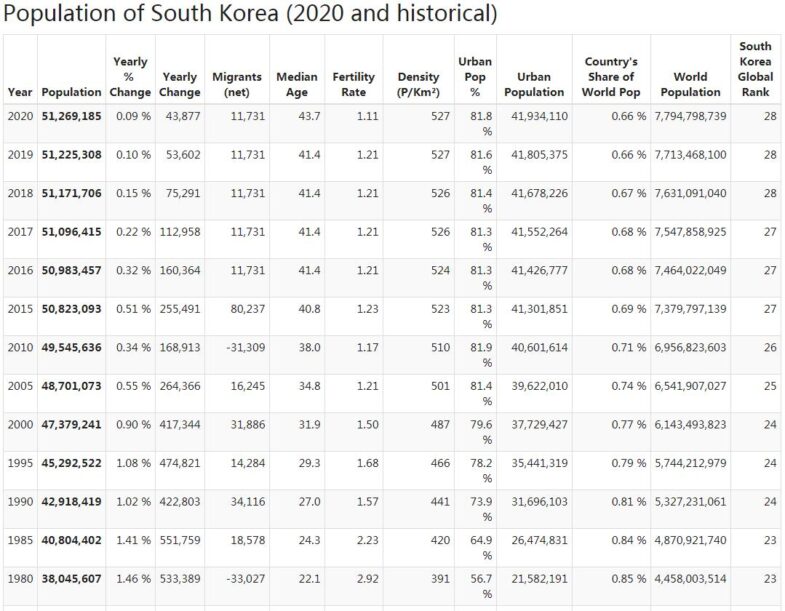 Of women over 15, almost every other person has a job. Together, they account for just over 40 percent of the entire workforce.

The Constitutional Court rejects an attempt by South Korean women, or by their relatives, who were used as sex slaves by Japanese troops during World War II to take up a government agreement from 2015. The victims have claimed that the Japan-South Korea agreement that formed a special fund for the victims of sex slavery been unfair and required further action. But the Constitutional Court says in its opinion that “it is difficult to conclude that the agreement violates the fundamental rights of the victims”.

Meeting of Foreign Ministers of China and Korea

China and South Korea’s foreign ministers meet for the first time since relations between the countries deteriorated in 2016 in connection with the deployment of the US robotic defense system THAAD in South Korea. At the meeting, Chinese Foreign Minister Wang Yi calls on South Korea to play a “constructive” role in creating regional peace and stability. He also calls the countries “close neighbors, friends and partners”. The meeting also emphasized the need to increase high-level exchanges and closer contacts. Also on the agenda for the meeting was the preparation of a summit between South Korean President Moon Jae-In, Chinese Prime Minister Li Keqiang and Japan’s Head of Government Shinzo Abe later in December.

Just a few hours before this summer’s decision to terminate a defense agreement with Japan (see August) to enter into force, the South Korean government announces that it is waiting to suspend cooperation. However, South Korea reserves the right to withdraw from the agreement at any time. The reason why South Korea has changed is, according to the government, the ongoing talks being held with Japan on the trade conflict that started this summer (see July).

North Korea’s leader Kim Jong-Un orders that a tourist resort on Mount Kumgang be destroyed. The facility was built and funded by South Korean company Hyundai Asan and was a popular destination for South Korean tourists until 2008, when a South Korean tourist was shot dead by a North Korean soldier when she entered military territory. Together with the industrial zone Kaesong, which is now closed, the tourist facility was one of the main cooperation projects between North and South Korea. The announcement that the facility will be destroyed comes just a day after President Moon, in a speech in connection with a budget debate in Parliament, highlighted inter-Korean projects and the creation of a “peace economy” as crucial to North Korea’s future.

The newly appointed Minister of Justice Cho Kuk has only been sitting in his post for just over a month but chooses to resign after he has been in windy weather after allegations that his daughter was admitted to an elite school with the help of the family’s influential contacts. Cho Kuk was appointed Justice Minister by President Moon despite Cho’s wife being charged with falsifying an academic award on behalf of her daughter. Large street demonstrations have been organized by students at the country’s premier university in protest of the appointment of Cho. Cho’s question of reforming the judiciary and criticizing elitism and social injustice in society has been seen as particularly problematic.

President Moon Jae-In presents a proposal in the UN General Assembly that “an international peace zone” be formed and replace the so-called demilitarized zone between the two Korean states. According to Moon, such a zone would be a way to respond to North Korea’s desire for security guarantees.

Japan is removed from the so-called white list of South Korea’s foremost and most reliable trading partners. The message is yet another step in the trade dispute between the countries that started in the summer and also a response to Japan in August removing South Korea from its list of priority trading countries (see also July and August).

The deposed former President Park Geun-hye’s trial is to be reversed. It announces the nation’s highest court after reviewing the process that led to her sentenced to 25 years in prison in 2018. The court believes that two separate convictions for corruption would have been the outcome instead of one. The trial will now be remanded in a lower court. Samsung chief Lee Jae-Yong will also face trial again, as three horses Samsung has given as a gift to the daughter of the president’s girlfriend should be classed as bribes. Lee was sentenced to five years in prison in 2017, but released in 2018 after a higher court changed the sentence.

A few days before it was time for the renewal of a General Security of Military Information Agreement (GSOMIA) with Japan to exchange military intelligence information, the Korean government announces that the agreement will be terminated. The reason is that it is not in the country’s interest to keep the agreement. The decision is seen as a result of the recently deteriorating relations between the countries. Much of the intelligence information that Japan and South Korea have been cooperating on through the agreement has been about North Korea and its testing of robots. Now, the countries will instead be referred to information from the United States, which is both countries’ military ally. The Japanese government is strongly critical of South Korea’s decision.

Moon is seeking dialogue with Japan

President Moon makes an invitation to cooperate with Japan after relations between the countries have deteriorated sharply during the summer (see also July). Moon is trying to calm down the ongoing trade conflict by suggesting that South Korea and Japan work together on fair trade and cooperation in the region. A few days earlier, South Korea has placed Japan in a new category of countries that have signed important export agreements but which have export restrictions that “violate international standards”. Previously, Japan had implemented trade measures that affected South Korea.

The US and South Korea begin military exercises

Japan decides to no longer allow South Korea to be part of the so-called white list of the nearly 30 countries that enjoy certain trade benefits. The decision will enter into force on August 28 and is part of an escalated trade conflict between the countries (see July). South Korea condemns the decision.

Russian violation of the airspace

South Korea’s Air Force fires warning shots at a Russian military aircraft reported to have been inside South Korean airspace off the east coast on two occasions. According to a South Korean staff representative, the incident is the first involving a Russian plane.

Japan, in early July, imposed restrictions on the export of three chemical substances. The topics are important for the manufacture of semiconductors and screens for smart phones and other advanced technical equipment, and the decision is particularly affecting South Korean technology companies such as Samsung. Japan’s export restrictions are met by upset reactions in South Korea. According to Japan, they are being introduced, inter alia, because South Korea has not handled imports of the substances, which can be used for military purposes, sufficiently carefully to avoid them being able to benefit North Korea. But basically, the conflict is said to be about Japan’s exploitation of Korean forced laborers during World War II and lack of willingness, according to South Korea, to take its responsibility for this. In a ruling last year, a South Korean court has demanded that Japan’s largest steel company Nippon Steel pay damages to South Koreans or relatives affected by the forced labor. However, Japan believes that the compensation issue was settled in 1965 in connection with the establishment of diplomatic relations between the countries.

Following a G20 summit in Japan, US President Donald Trump makes a planned visit to South Korea. In connection with that, there will also be a seemingly improvised meeting with Kim Jong-Un in the demilitarized zone between South and North Korea. When Trump, along with Kim, crosses the border, he becomes the first sitting President of the United States to enter North Korean soil. At the meeting, Trump and Kim promise to continue talks to breathe life into the talks on North Korea’s nuclear weapons program.

the 13th of March

After the air pollution in the country has become record high in recent weeks as a result of a high proportion of fine dust particles, Parliament adopts emergency measures. Among other things, air purifiers must be used in schools. The dust particles are believed to be spread from China. People in the streets of Seoul have been forced to wear face masks and avoid staying outdoors.

Former Prime Minister Hwang Kyo-Ahn is elected leader of Korea’s Freedom Party (LKP). He will lead the party in the next two-year term, when parliamentary elections will also be held in 2020. Hwang is one of the favorites among conservative voters ahead of the 2022 presidential election and is perceived by analysts to be able to recover the opinion loss the party received following the corruption scandal surrounding President Park Geun -Hye.