The majority of jobs are in the service sector, where more than 70 percent of those who have jobs are employed. Every tenth employee is in the manufacturing industry, while the mining industry employs 2.8 percent of the workforce.

The number of unemployed has increased over the past three decades as the structure of the business sector has changed. Farmers, miners and textile workers have been hit hard. Unemployment is higher among blacks and very high among black youth.

Many jobs have disappeared as a result of rationalization in business. The growth of the service sector and the public sector has not been able to compensate for all lost jobs. Nearly half of South Africa’s population is estimated to be dependent on jobs in the so-called informal sector of the economy.

The average salary before tax is SEK 8,150, but the distribution of wages is large. There is no national minimum wage, but different sectors of the business sector apply minimum wages. The lowest are maids whose wages may not be less than SEK 7 per hour.

Labor migration increased sharply in the early 1990s, when the borders were opened. It has mainly come from low-skilled labor, which has caused protests from unemployed South Africans and led to increased xenophobia. 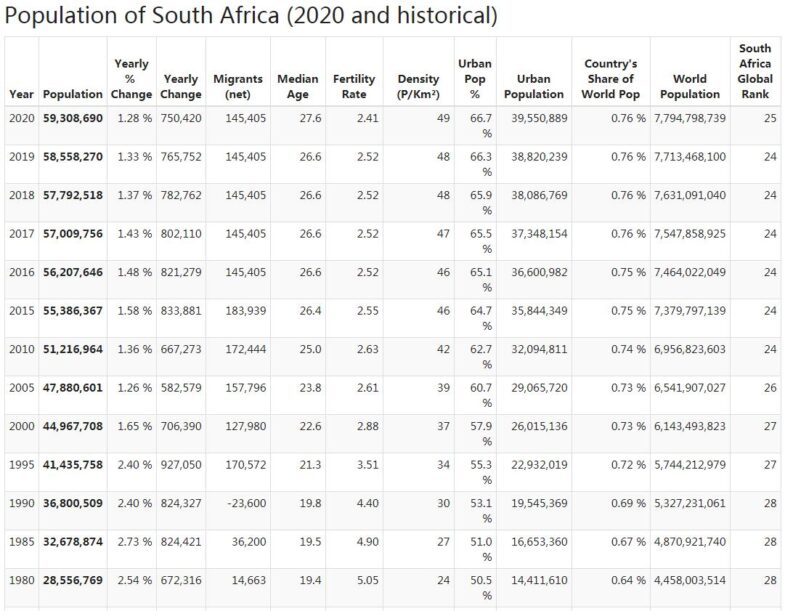 About one million whites have left South Africa, which has contributed to the business sector’s large shortage of well-educated labor.

There are specific laws, BEE (Black Economic Empowerment), that will strengthen the influence of blacks in business. The purpose is to transfer parts of the industry from white to black owners and for government agencies to place their orders primarily on companies run by blacks.

The laws apply to companies with a turnover exceeding SEK 3.5 million. The companies collect points based on a list of rules, including the proportion of black co-owners and black managers. The points are then used to be considered for procurement in the public sector. Those companies that do not have enough points can only do business in the private sector. In the public administration and state-owned companies, there are also detailed quotation rules on how staff should be ethnically composed. This has led to, above all, whites being cleared out. The changes have provoked widespread protests against efficiency being eroded due to the loss of experienced labor.

According to the rules, companies with more than 50 employees must have a staff that reflects the ethnic composition of the place where they operate. The law was intended to favor blacks in new hires and was welcomed by the unions, but has been criticized by entrepreneurs who suffer from a shortage of well-educated workers and find it difficult to find the staff they seek among blacks who received poorer education during the apartheid era.

The government wants to tighten the rules so that ethnic quotas continue to reflect the ethnic composition throughout the country. This means that management and larger companies must ensure that the workforce consists of 80 percent blacks, even in areas where the majority are colored, such as in the Northern and Western Cape provinces. These rules are already applied in the public sector and have led to a number of legal cases driven by people who are denied promotion because they are colored. If the proposal becomes law and begins to be applied generally, this means that a large number of people risk losing their jobs and will have to move to other countries to get jobs.

BEE laws have been criticized by business and foreign investors, but also by South African unions who believe that a black elite favors but not the poor masses. Some analysts warn that it contributes to growing corruption with ties between the elites within the business community and the ANC, respectively. There is also much criticism that public sector appointments right down to the municipal level are based on loyalty to the governing party rather than formal qualifications.

The trade union movement is dominated by Cosatu (Congress of South African Trade Unions), which is affiliated with the ANC and represented in the government. After 2014, when seven unions left the organization, 13 unions remain with a total of just over 1.5 million members. Cosatu has led protests against the government’s cuts in the public sector and privatization plans.