The formal labor market is poorly developed. An overwhelming majority of South Sudanese rely on cultivation and livestock farming for their own use or on jobs in the informal economy, such as barter or street sales.

Both industry and commercial agriculture are undeveloped and therefore offer few jobs. Nor does the lucrative oil recovery provide any jobs to speak of. Consequently, most of the salary work is in public administration, trade and service, but the number of jobs involved is difficult to chart.

As a result of the employment of so few South Sudanese, the trade union movement is very limited. There is a national organization but it is unclear how effective it is. Before the Civil War broke out in 2013, the authorities were drafting a law to regulate the labor market. There are reports of how local professional organizations have worked to stop the most serious forms of child labor.

According to the constitution, women should be entitled to equal pay as men for the same kind of work. In government and public companies, at least 25 percent of the services should go to women. Likewise, at least every fourth minister in the government should be a woman. 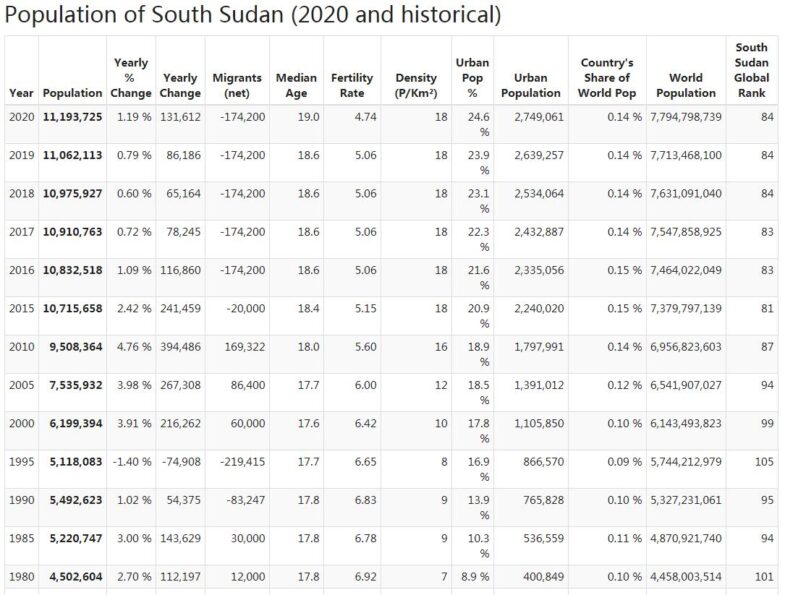 During the war against northern Sudan (1983-2005), all militia put civilians into forced labor; most often it was boys who were forced to become soldiers. A few hundred thousand women and children were robbed and in most cases taken to northern Sudan to work as slaves in households or agriculture (see Social Conditions).

Three UN agencies report that more than 150 women and girls in the city of Bentiu in the north have contacted them in the course of twelve days and pleaded for help after being raped or subjected to some other form of sexual violence. The perpetrators are described by the women and girls as men with uniforms and weapons. A UN report later shows that the government army is likely to bear some of the responsibility for the crimes committed by armed criminal youth or former SPLA soldiers.

Violation of the arms embargo

An expert group submits a first report on the situation in South Sudan to the UN Security Council since the introduction of the arms embargo (see July 2018). The group has found evidence of a number of crimes against the embargo, including Sudan and Uganda taking troops into the country. The report also testifies to “alarming levels” of sexual violence, hunger and human rights violations.

The rebel leader Machar in Juba

The rebel leader Riek Machar returns to Juba for the first time in two years to attend a peace ceremony. According to the peace agreement, he is to be re-installed as vice president (see Current Policy).

The UN calls for progress in the Abyei conflict

The UN Security Council extends the mandate of the peacekeeping force in Abyei by six months, but at the same time warns Sudan and South Sudan that the force will then be taken home if the countries make no progress on the border conflict in the oil-rich area.

A new British study shows that more than 382,000 people have been killed as a result of the civil war since 2013. That is a significantly higher figure than the one previously stated in a few tens of thousands. The figure means that more people have been killed in the war in South Sudan than in Syria, where the war since 2011 is estimated to have harvested just over 360,000 lives. The figure includes deaths for direct battles and for indirect consequences of the war such as epidemics and famine. Despite the latest peace agreement, the fighting continues in several places in the country, and just over six million South Sudanese go hungry every day. The study was done at the London School of Hygiene and Tropical Medicine.

A new peace agreement is concluded

President Kiir and rebel leader Machar sign a new peace deal in Ethiopia’s capital Addis Ababa. The details of the agreement are not yet known. Some evaluators express weak hope, others skeptical that the agreement will last. Some feel that the parties have been forced from outside, mainly leaders in neighboring countries such as Sudan and Ethiopia.

Ten government soldiers are sentenced by a military court to prison for between seven years and life in a series of serious crimes committed during an armed attack on Hotel Terrain in Juba 2016. Two soldiers are convicted of the murder of a journalist, others convicted of rape on foreign aid workers, sexual harassment, theft and robbery. The court ordered the government to pay damages to survivors, relatives of victims and to the hotel owner. The abuses at Hotel Terrain are described as the worst attack on foreign nationals during the civil war. The attack on the hotel took place when fierce fighting lasted for three days in Juba between government forces and rebels.

Amnesty for the resistance groups

President Kiir, through decree, pardons rebel leader Machar and his soldiers and gives them impunity for any crimes committed since the outbreak of war in 2013, the country’s state radio announces. The amnesty also applies to other resistance groups that have taken up arms against the government. The decree will take effect on August 8, 2018.

An agreement on power sharing is concluded

President Kiir and rebel leader Machar sign a power-sharing agreement in Sudan’s capital Khartoum. The agreement means that Machar will once again take office in the government, this time as the first of five vice presidents. The idea is that the agreement will lead to a full-fledged peace agreement. Once signed, the parties have three months to form a unifying government. It will hold government power for three years and consist of 20 ministers from the Kiir camp, nine supporting Machar and a handful of ministers from other resistance groups. Parliament will have 550 members, including 332 Kiir supporters and 128 from Machar’s faction.

Cars for Members of Parliament

Many South Sudanese are upset when the poor country’s 400 MPs receive $ 40,000 in loans each to buy cars. A spokesman for President Kiir says that the members cannot be expected to “ride a motorcycle”. Critics accuse Kiir of rewarding members for recently extending his term of office for another three years. Half the country’s population is threatened by starvation due to food shortages that have arisen in the wake of the war. Nearly four million people are on the run. Many public servants have not been paid for a long time. Members will repay the money within five years, according to the spokesman.

UN Security Council faces arms embargo on South Sudan and sanctions against two former military commanders. This has happened since the last attempt to achieve peace in the country failed. The proposal for an arms embargo is presented by the United States and is supported by nine countries. Russia, China and four other nations abstain from voting. The arms embargo is valid until May 2019. Former high-ranking military chiefs, Paul Malong Awan and Malek Ruben Riak, end up on the UN sanctions list, which means that they receive a global visa ban and some of their assets are frozen.

Kiir remains there for another three years

Parliament votes to extend President Kiir’s term of office by another three years, until 2021. The reason is that the country is unable to organize elections. Kiir became president in 2011. The presidential election in 2015 was also suspended, after which Kiir’s mandate was extended to 2018. The opposition criticizes the decision which they believe violates the spirit of the new peace agreement. At the same time, reports of new fighting are coming out in the country.

The UN accuses government soldiers and allied militias of deliberately targeting civilians as targets in rebel-controlled areas. Government soldiers have killed at least 232 civilians and gang-raped women and girls during attacks on rebel-controlled villages in the state of Unity in the north between April 16 and May 24, 2018, the UN Human Rights Office said in a new investigation. In several cases, it could be war crimes, according to the investigation, which describes how the elderly, disabled and children were hanged in trees or burned alive in their homes. Rape and other sexual violence are systematically used as weapons in the conflict. At least 120 women and children have been raped by one or more soldiers during the same period. At least 132 women and girls have been removed. In the area around Leer,

“The army breaks the truce”

Just hours after the peace treaty, the Khartoum Declaration, began to apply, the rebel side accuses the army of colluding with the Sudanese guerrillas Jem against the ceasefire by an attack on a rebel posting outside the city of Wau. Representatives of the government army say they do not know that such an attack would have taken place. The peace agreement came after severe pressure from outside, not least the US warnings of sanctions directed at South Sudan.

An agreement on a ceasefire is concluded

After a couple of meetings under the auspices of the regional cooperation organization Igad, President Kiir and the rebel leader Machar sign a document, called the Khartoum Declaration, to introduce a “permanent” ceasefire within 72 hours. Under the agreement, troops are to be withdrawn, corridors opened to civilians and both prisoners of war and political prisoners are to be released. In addition, a transitional government will take office within 120 days and rule the country for three years. During this period, general elections must be prepared. According to the declaration, South Sudan and Sudan will jointly equip a number of oil wells in the state of Unity to increase oil production. Talks in the talks are Sudanese President Omar al-Bashir and the document is signed in the Sudanese capital of Khartoum. Assessors are at best cautiously optimistic about the declaration, when a number of similar agreements have been broken in the past. The ceasefire should be monitored by AU and Igad.

The US limits technical support to the oil industry

The US restricts its export of technical support to the South Sudanese oil industry on the grounds that the oil revenues help to finance the civil war. However, South Sudan is extracting most of its oil in collaboration with Chinese, Indian and Malaysian oil companies.

The UN mission is extended by one year

The UN Security Council votes unanimously to extend the peace mission in South Sudan by one year. At the same time, the Council is threatening to introduce an arms embargo if it becomes necessary, that is, if the fighting does not end. The mission consists of 17,000 men, including the 4,000 strong regional security force and just over 2,100 police. According to the UN, over half the population is threatened by severe famine. In February 2018, a UN commission stated that there was sufficient evidence to prosecute at least 41 military commanders and high-ranking civil servants for war crimes and crimes against humanity.

The US restricts arms exports and other defense equipment to South Sudan as a result of the civil war. The United States, which is South Sudan’s largest donor, will stop almost all arms exports and make few exceptions to that rule. It states the US State Department.