In Sierra Leone there is hardly any formal labor market. Most people work with agriculture for self-catering or in the so-called informal sector.

About half a million young men try to find their way around diamonds. Since most people cannot afford to buy their own equipment or buy a license, they have to work for others and often end up in slave-like conditions. The areas where there are diamonds are poorer and less developed than other parts of the country.

Most new jobs created are in the informal sector. Within the trade union movement, which was once one of the strongest and most active in Africa but which almost ended during the civil war, there are today several unions representing the informal sector. The largest trade union organization is the Sierra Leone Labor Congress (SLLC) with more than 50,000 members. The trade union movement is trying to stay out of politics but has organized several strikes and demonstrations in recent years.

There are no current figures on formal unemployment, but it is estimated to be at least 50-60 percent and even higher for young people. 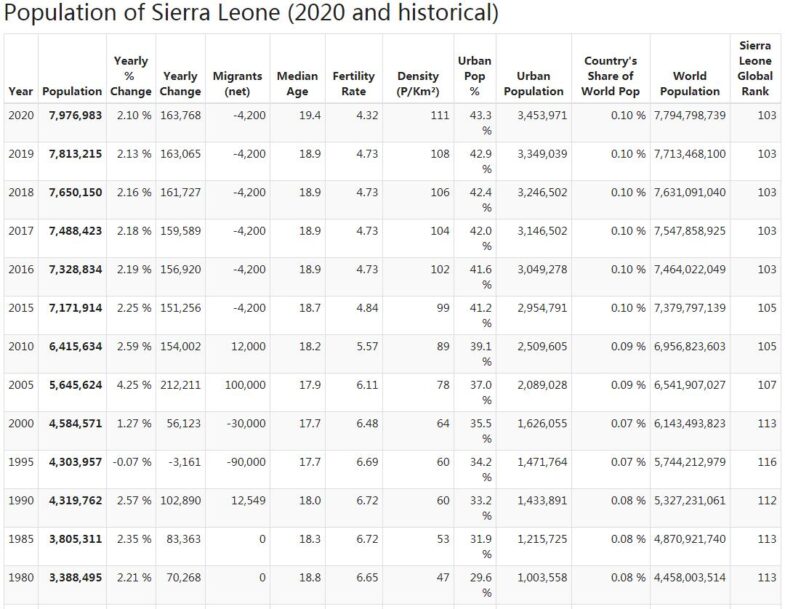 President Julius Maada Bio eases the restrictions imposed to prevent the spread of covid-19. It is again allowed to travel between the different regions of the country and the nightly curfew is shortened to now apply between 23.00 and 06.00. Commercial flights will soon be allowed. The country has so far found 1,340 cases of covid-19 and 55 people have died as a result of the viral disease

Minister is suspended after allegations of death threat

President Julius Maada Bio shuts down one of his ministers, Abu Abu Koroma, after allegations that he threatened to kill people who have been behind the recent unrest. A video has been circulated via social media where Koroma, the minister responsible for the northern part of the country where the opposition is strong, tells a group of people that those behind the riots should be shot. The president has previously accused the opposition within the National People’s Congress (APC) of being behind the recent unrest, something he called “terrorist violence”. This includes a prison riot in Freetown (see April 2020)) and an incident in the same city when a group of fishermen attacked a police station and a health clinic, since the authorities limited how many boats would be allowed to leave the port to fish. So far, 307 cases of covid-19 have been reported in Sierra Leone and 18 people have died in the disease.

The restrictions are extended

President Julius Maada Bio extends the restrictions imposed to limit the spread of the new corona virus for three days starting Sunday, May 3. There is concern that the country is particularly at risk, both due to widespread poverty and poor health care. The restrictions mean that all travel between regions is prohibited, a nightly curfew has been imposed and schools have been closed. In addition, the country has closed its borders and stopped all international air traffic. So far, 128 confirmed cases of covid-19 and seven deaths have been reported from Sierra Leone.

Eleven people are killed in connection with a riot in a jail, Pademba Road Prison, in Freetown. The unrest erupts after a prisoner is found to be infected by covid-19. The government claims that it is a failed escape attempt and is not related to the ongoing pandemic.

Authorities are ordering all Sierra Leonies to stay home from Sunday. This happens after a second case of covid-19 is discovered in the country.

Pregnants are allowed to go to school

The Ministry of Education scraps the law that was introduced in 2015 and which prohibits pregnant teenagers from going to school. The law was introduced after a steep rise in teenage pregnancies and sexual violence. During the Civil War (1991-2002), rape was used as a weapon and violence against women in the country is still widespread. The criticism of the law was massive from legal organizations who pointed out that it discriminated against teenage mothers who risked getting stuck in lifelong poverty without education. The court of the West African partner organization Ecowas ordered Sierra Leone in December 2019 to lift the ban on teenage mothers’ schooling.

Sierra Leone has now received its first case of covid-19. It is a man who has returned to his homeland from France. He is now in quarantine. According to President Julius Maada Bio, they are now trying to track down all the people the man has been in contact with. Sierra Leone has already taken a number of measures to prevent the spread of infection in the country, and schools are closed for the time being.

The Supreme Court repeals the ban that prevailed since 2015 for pregnant girls to go to school. The decision is justified by the prohibition of discriminating against women and violating their human rights. The ban was introduced when schools reopened after the Ebola epidemic in the country, as teenage pregnancies had increased rapidly. According to a 2015 report by Unicef, 40 percent of all women get married before they turn 18.

Sierra Leone cancels all international air traffic in order to prevent the spread of the new coronavirus causing the covid-19 disease. This will be valid until further notice. All public gatherings of more than 100 persons are prohibited. President Julius Maada Bio invites the opposition to assist in the fight against the corona virus. To date, no cases of covid-19 have been reported from Sierra Leone, which was severely affected by the Ebola epidemic 2014–2016. Then about 4,000 people died as a result of Ebola.

Gibril Massaquoi, former spokesman for the Ruf rebel movement, is arrested in Finland. According to a Swiss organization, Civitas Maxima, he is suspected of serious war crimes in Liberia, between 1999 and 2003. He is believed to have resided in Finland for the past ten years.

Minister is suspended after corruption charges

Labor Minister Alpha Timbo and three employees of the Ministry of Education are suspended following suspicions that they have been guilty of corruption in connection with a large donation of rice from China. Timbo was previously Minister of Education.