A large majority of Seychelles employees work in the service sector, most in the tourism industry. More than half of the workforce is employed in the public sector.

Just over 4 percent of the workforce was registered as unemployed in 2012.

Employees have the right to form trade unions, with the exception of police, military and firefighters, among others. There is a dominant central organization, the Seychelles Federation of Workers’ Union (SFWU), which has close ties to the ruling Party Lepep.

Strikes are illegal unless the parties first tried to resolve the conflict through mediation.

The working week is 45–55 hours, but in practice many work up to 60 hours. Employees are entitled to at least three weeks’ holiday and there are rules on breaks and overtime. 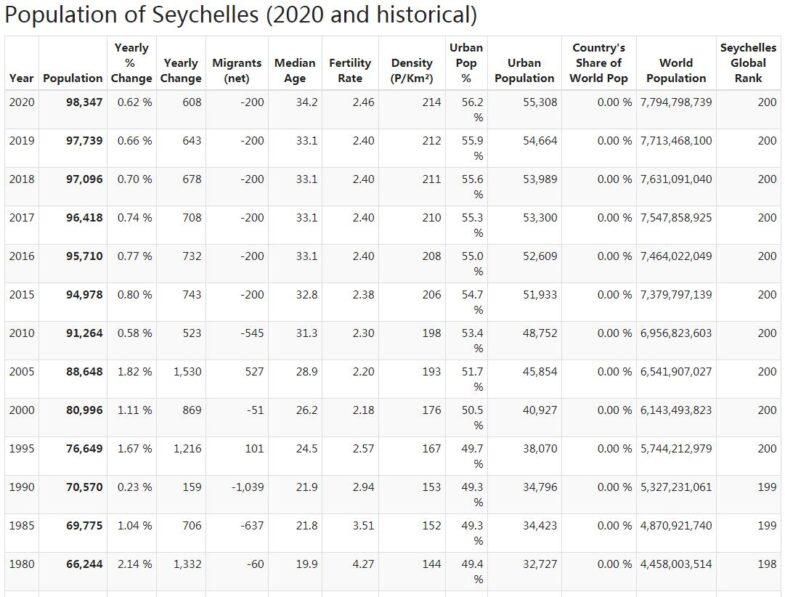 Guest workers from, for example, India and the Philippines who work in the construction industry and the fishing industry do not have the same rights as the domestic workforce. They often have lower wages and longer working hours.

70 sailors from West Africa who belong to a group of 200 people come to Seychelles to work on Spanish fishing boats have been found to be infected by covid-19. All of them must have had certificates that they were not infected and none of them have any symptoms. They will now quarantine the boats they will be working on. Seychelles has had only eleven cases of covid-19 and all those who have been ill have recovered.

The Seychelles are easing the restrictions

Authorities are now easing the restrictions imposed to limit the spread of the new corona virus. No new cases of the disease have been reported for almost a month. In total, the Seychelles have had only eleven cases of covid-19. However, schools remain closed until mid-May and bars and restaurants in June.

The Seychelles are now imposing restrictions on the inhabitants of the main island of Mahé as well as on Praslin and La Digue. All residents are quarantined and may only leave their homes to buy food. However, exceptions are made for those who have the necessary work.

First cases of covid-19 in Seychelles

The first two cases of covid-19 are reported in Seychelles. It concerns two people who have returned to their home country from Italy. The authorities immediately begin to track infection to see if more people have been affected. The country has already imposed a ban on cruise ships from South Korea, Iran, China and Italy to call its ports.

Success for the government’s anti-drug program

Heroin abuse is a growing problem in Seychelles. About 5,000 people are estimated to be dependent on the drug, which corresponds to about a tenth of the country’s total workforce. The government has acted to address the problem by triggering a national health emergency and is investing $ 5.5 million in health care and preventive measures, which is about ten times more than was invested in 2016, instead of punishing those who abuse. A state methadone program should have reached 2,500 heroin addicts. It is already possible to see other positive results, both in terms of health and social problems. Crime has almost halved and the number of cases of hepatitis C has decreased significantly, and youth unemployment has fallen from just over 6 percent to slightly over 2 percent.