A long period of strong economic growth has led to high employment and labor shortages in Singapore. The government has tried to rectify this by investing in automated production, knowledge-intensive industries and further training of the workforce. They also try to get women and the elderly to work more.

Singapore attracts many job seekers from other countries; nearly a third of the workforce is guest workers. The foreign workforce consists mainly of low-skilled immigrants in the industry, construction industry and the service sector. But also highly educated people immigrate, something that the government encourages.

Singapore is regularly criticized for the fact that low-skilled guest workers, such as household employees, often have inadequate labor protection and very low wages. Although riots are uncommon in Singapore, the poor conditions in recent years have led to strong protests.

Unemployment has historically been low, but on three occasions in the country’s modern history it has increased significantly: after the Asian crisis in 1997, during the sharp economic downturn in 2001 and after the global financial crisis in 2008.

During the period 2011-2013 tougher requirements were introduced for work permits for guest workers, a higher statutory minimum wage and also more expensive education and health care for guest workers and their families. This was a way to stave off increased dissatisfaction among Singaporeans because guest workers were considered to lower wages, raise housing prices and burden public transport. 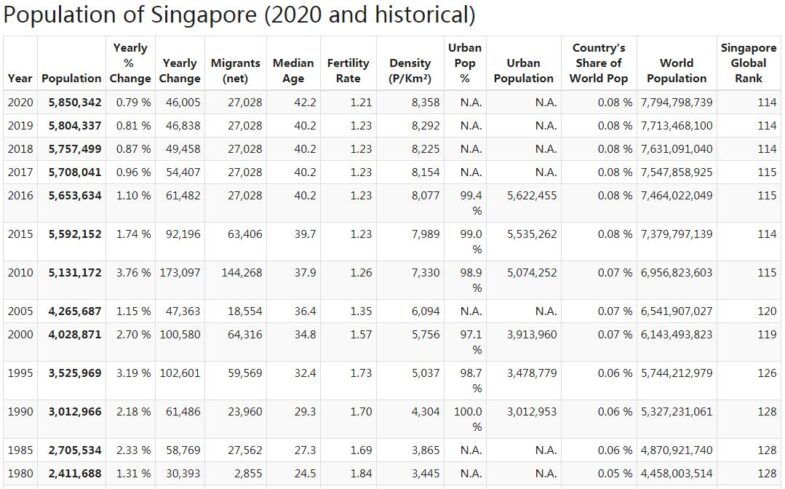 The trade union organization Singapore National Trades Union Congress (NTUC) is the only authorized trade union movement. It has strong ties to the government and the state-bearing party PAP. NTUC can almost be compared to a department in the Ministry of Labor. For example, the country’s prime minister must approve the election of NTUC chairman.

Only uniformed personnel and civil servants of higher rank lack the right to organize trade unions. The right to collective agreements exists and is exercised with certain restrictions. All agreements must be approved by a special court. By law, almost everyone, except employees in the show service profession in the water and energy sectors, has the right to strike, but this must be done with two weeks’ notice and all employees must support the decision.

The guest workers are exempt from the right to organize, as well as the right to collective bargaining and to strike. Instead, they have merged into the Migrant Workers Center.