Four-fifths of Qatar’s workforce consists of foreign migrant workers without citizenship in the country. They come mainly from South Asia and other Arab countries and have been attracted to Qatar in the pursuit of work since oil extraction began in the 1940s.

Today, the Qatari is completely dependent on the foreign workers to keep their oil and natural gas industry running. Over time, many non-Qatarians have also been employed by the health care system, the education system and other important social sectors.

Although the government’s policy in the 21st century was aimed at reducing dependence on foreign labor, to “categorize” the labor market – at least in the sectors requiring higher education – this has hardly been possible. Instead, the major construction projects, not least before the World Cup 2022, have brought with it an increased inflow of foreign labor. (In 2013, the World Cup preparations created around 120,000 new jobs.)

Many guest workers have completely lacked labor law protection and worked under slave-like conditions under a system called Kafala. The government announced at the end of 2016 that the system would be replaced by a form of contract work, but according to human rights organizations, it would hardly make any difference. Kafala meant that guest workers were completely in the hands of a mandatory job sponsor, usually the employer, who rarely took care of his employee’s passport. He was thus unable to leave the country or change jobs. Reports of breach of contract by employers have been common, as have information on physical and sexual violence against guest workers. Female domestic workers have been particularly ill-treated. The international criticism of the conditions has been harsh, which has helped to mitigate or repeal the rules of kafal. The requirement for an exit permit for those wishing to leave the country has now been abandoned. 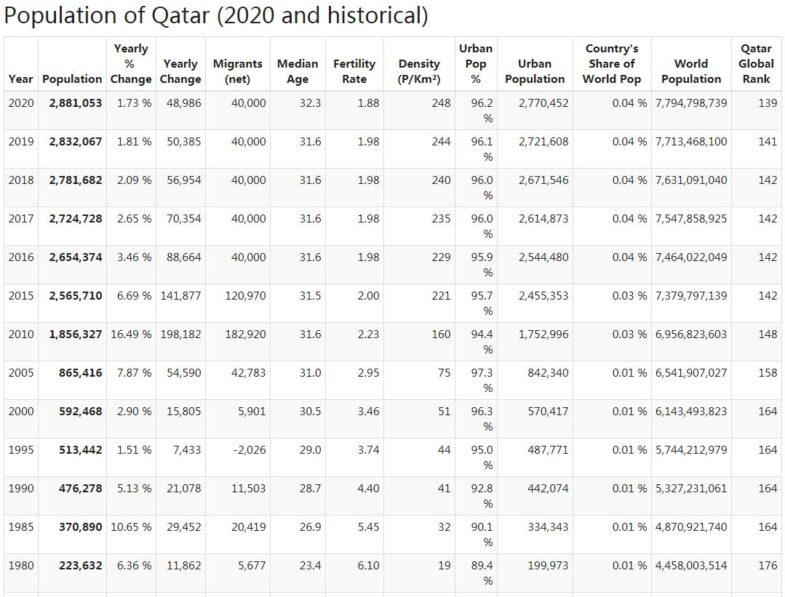 A law that came in 2017 regulates for the first time the conditions for hundreds of thousands of employees in the home. The law means that the working day must not exceed ten hours and the working week must not exceed six days. Employees must receive pay every month and are entitled to three weeks’ leave per year. The government also promised, among other things, to impose a minimum wage for all employees (see also Calendar). At the end of 2019, the next step was promised: an increase in the low minimum wage, which had been set at the equivalent of US $ 200 a month. How much was not stated.

Since 2018, there is a support fund that will, among other things, help employees who do not receive their salaries.

Only one national trade union is allowed in Qatar, and only privately employed Qatari nationals may become members of it.

A law is passed that gives the Qatari TV channel al-Jazira status as a private organization in the public interest. This gives the channel greater editorial and administrative freedom.

Elections to advisory bodies are held

Elections to an advisory body are held for the fourth time. 117 candidates stand and voter turnout amounts to just over 43 percent (see Political system). The Council mainly has a role in municipal issues.

A human rights activist who criticized Qatar’s book censorship is arrested. However, he was released a month later after strong criticism from human rights organizations.

Qatar participates in the military intervention in Libya during the so-called Arab Spring, the wave of protests against conservative rulers sweeping across North Africa and the Middle East this spring. There are also reports that Qatar is supplying arms to the Libyan opposition. Qatar is also involved in the development of events in Egypt by supporting the Muslim Brotherhood. The movement is banned in Egypt but nevertheless constitutes the main opposition in the country and has riots in many neighboring countries. Qatar also quickly expresses its support for the opposition in the civil war that is breaking out in Syria.