The majority of Portuguese work in the large service sector, including the tourism industry. During the severe economic crisis of recent years, unemployment has risen rapidly, not least among young people, women and immigrants, to fall again somewhat in the mid-2010s.

The lack of work forced Portuguese for a long time to emigrate. After the 1974 revolution, emigration slowed and after EU membership in 1986 unemployment began to decline. New jobs were created when foreign companies were attracted to the country by the low wage situation.

At the end of the 1990s, there was a shortage of vocationally trained labor and more Portuguese people moved home than out of the country. After the turn of the millennium, however, unemployment rose again as the economy reversed, and emigration gained new momentum. As a result of the global financial crisis that developed in 2008, many Portuguese people lost their jobs. In 2012, unemployment was estimated at 15 percent, the following year it exceeded 16 percent. In the same year, about one in three young people were without a job. Since then, the share of unemployed has dropped to below 12 percent in the summer of 2016.

There is unemployment insurance, but the level of compensation has been lowered as part of the extensive savings made in connection with the economic crisis (see Finance). However, only a small proportion of the unemployed receive part of any unemployment benefit.

Wages are among the lowest in Western Europe. For years, while wage levels increased, the austerity packages during the economic crisis at the beginning of the 2010 led to wage reductions in all areas. The statutory minimum wage was after an increase in 2016 of EUR 618, but the average monthly salary is higher. Prices are slightly lower than in Sweden.

The service sector employs about two-thirds of the workforce. The manufacturing industry accounts for just over one-sixth of the job, and about a tenth work in agriculture. There is also a large illegal labor market, especially in the construction and service sectors. This is mainly where Eastern Europeans and people from the former colonies of Portugal work. 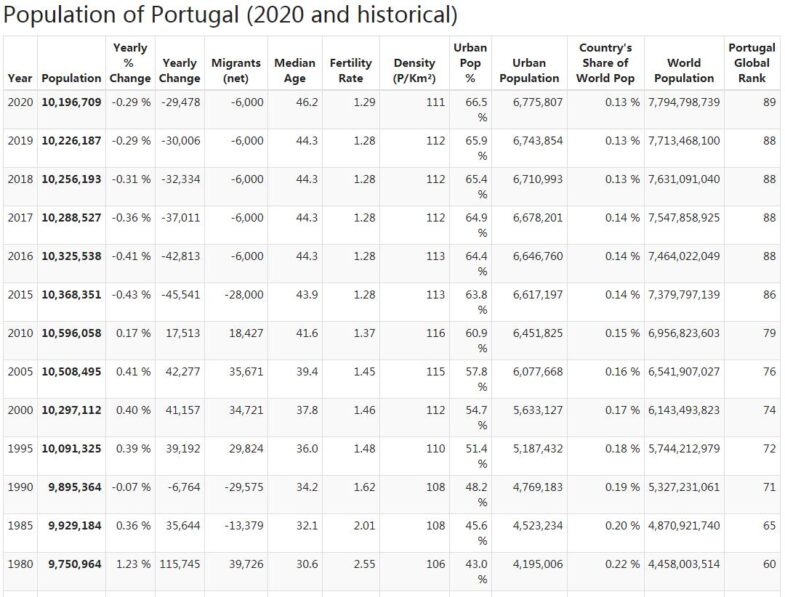 Since 1989, the labor market has gradually been liberalized. Among other things, it has become easier to dismiss staff. In 2003, a comprehensive reform was introduced, as the penalty rate increased for employers who violate the employee’s rights. At the same time, the unions’ negotiating rights were weakened, and the rules that apply to strikes were tightened. More flexible working hours were introduced, which means that employees can work up to 60 hours a week (previously there was a limit of 50 hours). The austerity package 2011 meant further deterioration for workers in terms of working hours, unemployment and unemployment benefits.

There are two national organizations: Confederação Geral dos Trabalhadores Portugueses-Intersindical Nacional (CGTP-IN), which is close to the Communist Party, and União Geral de Trabalhadores (UGT) with close ties to the Socialist Party. Most union members belong to CGTP-IN.

Trade unions’ previously so strong influence has diminished in recent decades; nowadays, about a quarter of the employees are unionized. Strikes have been relatively uncommon, but since the turn of the millennium several general strikes have been held in protest against cuts and wage hikes in the public sector. In May 2016, the port workers carried out a large strike, and in July a strike was started among healthcare professionals.

The prevalence of child labor has declined over the past decade, but is found in agriculture, in shoe and textile factories and in the construction and hotel sectors.

On November 23, President Costa commands government to form. Costa emphasizes that Portugal must continue to fulfill its international commitments in the state budget and its debts. He also excludes Portugal from leaving the euro. The measures planned include raising the minimum wage and pensions. Planned pay cuts for public employees will not be implemented.

The government is leaving

The Socialist Party concludes separate agreements with the Left, the Communist Party and the Greens. The three small parties promise to support a socialist government. The bourgeois government resigns after losing a vote of no confidence in the National Assembly on November 10.

Prime Minister Passos Coelho gets commissioned to form government even though Socialist Party leader António Costa considers himself more able to form a stable ministry by working with the Communist Party and the Left Bloc. On October 27, the new bourgeois government joins PSD and CDS-PP.

Forward Portugal wins the election with 37 percent of the vote and 99 seats, ahead of the Socialist Party with 32 percent and 85 seats, the Left Bloc 10 percent and 19 seats and the Communist Party 8 percent and 17 seats. The government alliance loses its majority in the National Assembly. The turnout is 57 percent.

Many promises during the election campaign

Ahead of the election to the National Assembly on October 4, the bourgeois government coalition promises a continued austerity policy, while the left parties criticize the government’s economic policy and promise tax cuts, more money for the social sector and an end to the tough savings policy. The PSD and CDS-PP government parties form the Alliance Forward Portugal and go to elections on joint lists in all electoral districts. The government may point to a certain economic recovery, but it is clear that the savings have had its price. The unemployment rate is 12 percent (for young people it is over 30 percent), one fifth of the population is considered poor and almost half a million Portuguese emigrated in 2011–2014.

The refugee disaster around the Mediterranean is increasing pressure on several EU countries to receive more asylum seekers. Portugal, which promised to take responsibility for 1,500 people, now says it is ready to increase its quota.

Parliament adopts several additions to abortion legislation. For example, abortion charges and a woman requesting abortion should be subjected to psychological and social counseling as well as information on family planning information before the pregnancy is terminated. Since 2007, abortions have been free of charge up to the tenth week of pregnancy.

Elections are scheduled for October

President Aníbal Cavaco Silva announces that parliamentary elections will be held on October 4.

The Socialist Party leader, António Costa, resigns as Lisbon’s mayor in order to stand in the parliamentary elections later that year. He is expected to succeed Passos Coelho from PDS as prime minister after the election. Fernando Medina becomes new mayor of the capital.

The prime minister regulates his debts

Prime Minister Passos Coelho regulates his tax debts (see February 2015), but in early March, a name-gathering begins with demands that he resign.

Public servants across the country go on strike in protest against austerity policies. This applies, among other things, to wage reductions of between 3.5 and 10 percent for all public employees who earn more than 1500 euros a month, the working week has also been extended from 35 hours to 40 hours.

The media reports that Prime Minister Passos Coelho did not pay any social security contributions between 1999 and 2004 when he worked as a consultant.

New figures show some economic recovery in Portugal in 2014, when GDP rose by almost one percent, thanks in large part to increased domestic consumption.

The government approves a new law that allows descendants of Jews who were expelled during the 15th century to gain Portuguese citizenship (see Population and Languages). Parliament already supported the law two years ago, which, however, required the government’s approval to take effect.