Only a small proportion of the working population have formal employment. The vast majority of Congolese support themselves in the informal sector.

Since the city of Brazzaville was the central place in the French colony of Equatorial Africa, the service sector and the administration of tradition are well developed. The majority of the formal employees have the state as an employer

Although the number of civil servants has fallen sharply, the Congolese state has a very large workforce in relation to the population compared to other developing countries. A small proportion of the formal employees work at private companies in the forestry, manufacturing industry or service industries. About 15 percent of the labor force is in the industry, but only a few percent in the oil sector.

The private service sector is an important source of supply for those Congolese who are not among the poorest. Congolese cities have lots of small businesses such as carpentry shops, repair shops, bars, cafes, taxi operations and bus companies.

In the informal sector of cities, trade is usually conducted on a small scale with different kinds of goods and services. In the countryside, most people make a living by growing their own land on small lots and selling any surplus.
There are no official unemployment statistics, but unemployment and underemployment are high. It is estimated that unemployment is over 50 percent.

The right to form trade unions is guaranteed by the Constitution and is usually respected. Virtually all public employees and a quarter of private employees are unionized. However, many unions are weak and independent of the power holders. 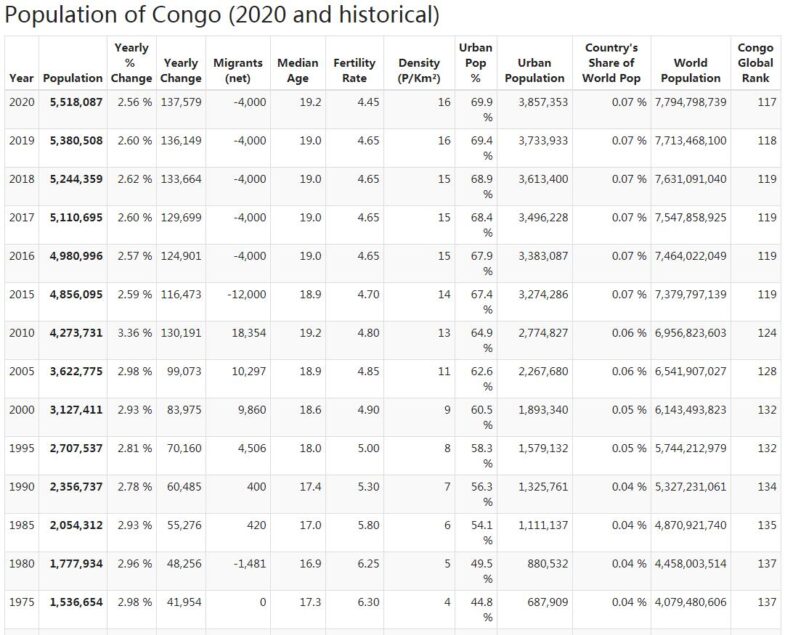 Child labor is prohibited, but is still common, mainly in the countryside and in the informal sector. Forced labor is also prohibited, but according to reports, it also occurs, mainly among the pygmy people who sometimes work under slave-like conditions.

Small steps towards peace with the Ninja Bells

The leader of the so-called Ninjamilis, Frédéric Bintsamou, also called Pastor Ntumi, has basically agreed that they should put down their weapons. This is done as part of the peace agreement concluded at the end of 2017 (see December 2017). This is the first time Bintsamou has appeared in public since the agreement was signed. The meeting takes place in Pool, some 10 miles southwest of the capital. The disarmament would have officially begun on August 7, but nothing has happened yet. This is a total of about 3,000 weapons. It is also not clear how many militiamen will be disarmed.

General Mokoko is sentenced to 20 years in prison

Congo-Brazzaville is one of 44 countries to sign a Free Trade Agreement at the African Union Summit in Rwanda. The agreement must be ratified at the national level before the AFCFTA free trade area can become a reality, but it is seen as a historically important step towards increased trade exchange within Africa.