Denmark has a strong trade union movement. Although the number of members has started to decline, just over three out of four employees are in the union. Wages are determined through collective bargaining.

An agreement from 1987 establishes certain rules for the parties, among other things, wage costs should not increase so much that they harm Denmark’s competitiveness. Disputes during negotiations normally go to a so-called mediation institute, which must be consulted before any combat measures are taken.

During major labor market conflicts, the government can intervene with the help of coercive laws, but this happens very rarely, partly because large strikes have become rare. The contractual minimum wages are relatively high, and the salary level is generally higher than in neighboring countries.

During the second half of the 1990s, unemployment more than halved. In 2008, it was at a record low of 2.6 percent and a labor shortage could be discerned. In the wake of the financial crisis, unemployment rose to 6 per cent in the years 2010-2013, to decrease to around 5 per cent in 2014 and 2015. For young people aged 15-24, the proportion of unemployed in the same year was just over 10 percent, one of the lowest in the EU. 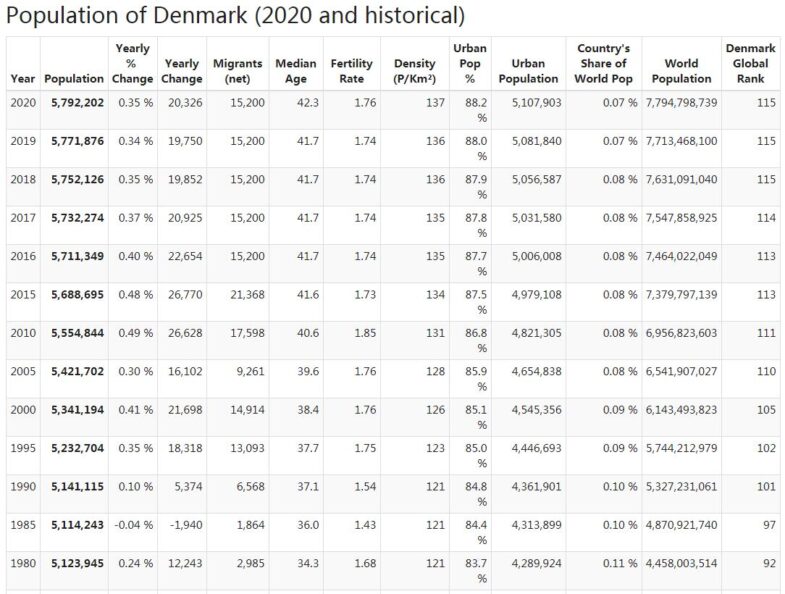 The unemployment benefit is relatively high and is paid for a long time. It has been debated whether there may be a link between the high unemployment rate and the so-called paradoxical problem, which means that there may be a shortage of labor in some sectors and certain parts of the country while unemployment is high. In recent years, the discussion has been more about the positive effects of the safety net made by the A-box. It is believed to contribute to making the labor market flexible, which in turn is good for the economy as a whole. The arguments are like this: because the remuneration is high, the union accepts that it is fairly easy to dismiss employees. And if it is easy to dismiss people when there is no employment, employers tend to be quick to hire when the business cycle turns. The phenomenon has become internationally known as flexicurity.

Denmark raises the limit for how many people may gather in Denmark from ten to 50 people. Crowds of more than ten people were banned in mid-March, in an effort to prevent the spread of the corona virus. The plan is for the government to gradually allow more people to gather. From July, the limit will be increased to 100 people and in August to 200.

The Danish government gives the go-ahead for some companies, such as hairdressing salons and traffic schools, to start operations again after the closure to prevent the spread of corona last month. The lower and middle schools also reopened a few days ago. About 7,500 Danes are reported to have been infected by the virus and 355 have died.

Record-spreading of the corona virus

According to Denmark’s Health Minister Magnus Heunicke, the spread of the corona virus over the past three days has been faster than in any other European country. Over 500 Danes are reported to be infected, compared to around 100 just a few days ago. The government now announces that the country’s borders will be closed to foreigners. The day before, all schools, preschools and universities were closed and sporting and cultural events were also canceled.

The Chinese embassy in Denmark strongly criticizes an illustration published by the Danish newspaper Jyllands-Posten. The image represents the Chinese flag where the stars in the left corner are replaced with corona virus symbols. The Chinese embassy believes that the image offends the Chinese people and demands a public apology from the newspaper and illustrator Niels Bo Bojesen. The editor-in-chief of the Jutland Post claims that it is about cultural differences and does not want to apologize because the image did not intend to in any way ironicize the prevailing corona epidemic in China.