Although Djibouti is a desert country, more than 70 percent of the labor force is found in agriculture, livestock and fisheries. Most rural residents are livestock nomads. There is a rapid move in to the capital Djibouti, where almost half of the residents are unemployed.

Nowadays two out of three Djibouti live in the capital. There are few formal jobs, so many city dwellers have to support themselves in the informal sector of the economy, such as street vendors or shoe polishers.

The large presence of foreign soldiers (see Foreign Policy and Defense) did not mean many new jobs for the Djibouti.

Unemployment across the country is estimated to be between 40 and 50 percent, and among young people up to 80 percent.

Child labor occurs even though a law prohibits children under 14 from working.

Some paperless immigrants from especially Somalia and Ethiopia are in the country, even though the government in the first decade of the 2000s carried out several mass expulsions and many subsequently chose to return home. Most paperless people work in homes or in the construction industry. 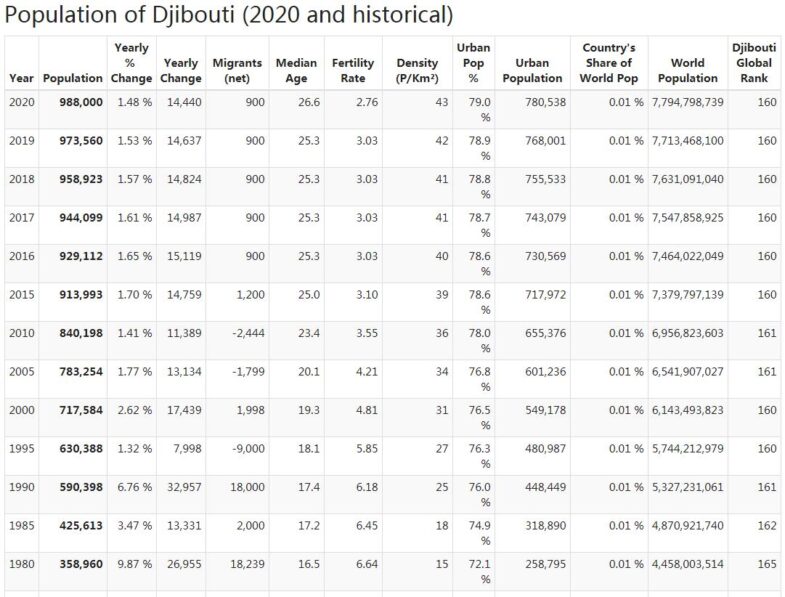 About one fifth of the labor force is unionized. There are two central organizations: Union Djiboutienne du Travail (UDT) and Union Générale des Travailleurs Djiboutiens (UGTD).

Trade union rights are limited. Freedom of the meeting exists according to the constitution, but for larger collections, permission from the authorities is required. Strikes are common, but they are not often beaten by police force.

Trade union activists are subjected to violations and harassment by the state apparatus. The UN agency ILO has reported on how union activists have been arrested and how the police raided the homes of trade unionists. In principle, the harbor workers’ union has not been able to operate since 1995 due to the members being harassed by the authorities.

The working conditions in many workplaces are described as poor or even dangerous.

Border conflict with Eritrea is stepped down

Qatar mediates the conflict between Eritrea and Djibouti and places observers and a peace force along the border. Eritrea withdraws its troops from the border.

The entrepreneur and presidential candidate Abdourahman Boreh is sentenced in his absence to 15 years in prison for terrorism and tax evasion.

The president gets a chance to be re-elected

The National Assembly approves constitutional amendments that allow President Guelleh to be re-elected for a third time.