Since the fall of communism there has been a transformation of the labor market. Above all, the proportion of employed in agriculture has fallen sharply to just under 3 percent in 2014 compared with 10 per cent in 1990. More than a third of the Czechs work in industry, while the service sector employs about 60 per cent of the labor force.

Almost 78 percent of Czech men and just over 62 percent of women worked in 2015, according to EU statistics (according to OECD figures, the employment rate is lower: 67 percent). The lack of childcare is one reason why women work less than men. The private day care centers that are available often have high fees.

In 2014, the government announced plans for a new form of childcare for children between the ages of 1 and 6, where employers, municipalities and others should be able to form new “children’s groups”. The business is to be run without profit interest and parents can deduct part of the cost in their tax return.

The economic crisis in 2008 led to almost double the unemployment rate in one year. In 2009, almost every tenth Czech job was missing. Since then, the situation has improved, and the official unemployment figures are now among the lowest in Europe, see the top list here.

However, there are major regional differences, and just as before, unemployment is significantly higher in old industrial areas in the Moravia than in Prague. More women than men lack work and unemployment is higher among the low-skilled than among the highly educated. A particularly vulnerable group are the Romans.

During the crisis years of 2008, many public employees had their salaries lowered and wage growth was also bad for private employees. In recent years, the wage situation has improved, but there are major differences between different industries and in different parts of the country. 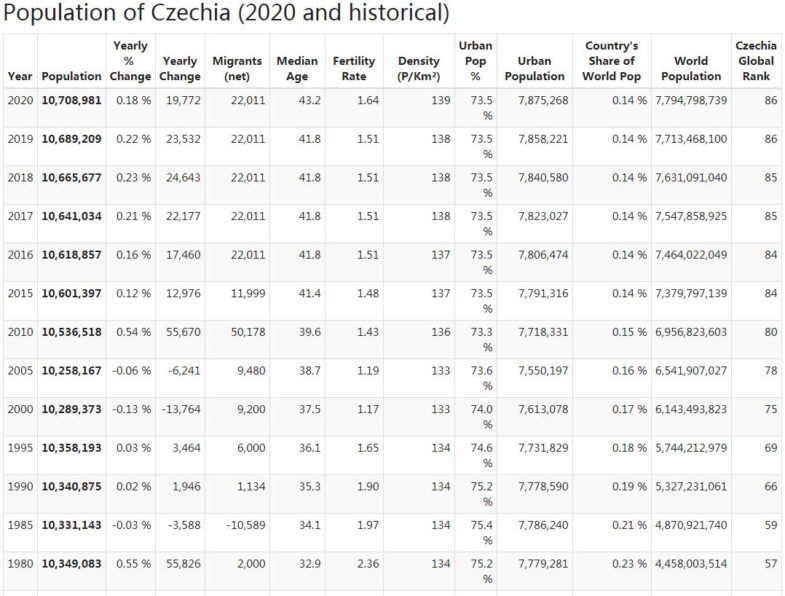 Wages are still low compared to many other OECD countries (the average salary in 2019 was about EUR 1,200 a month). Women’s wages are on average 24 percent lower than men’s, and it is also more common for women to work part-time.

The lack of skilled labor creates problems, for example in the healthcare, metal industry and transport sectors. Lobby organizations have urged the government to make it easier for them to hire foreign workers. In the fall of 2016, it agreed to increase the labor force quota from Ukraine.

The work week is normally 40 hours and all employees are entitled to 20 days paid vacation.

There is a larger independent country organization, ČMKOS, which in 2015 consisted of 29 different unions that had a total of about 300,000 members. The proportion of union members has fallen sharply since the 1990s. The union claims that in recent years, employers have become less willing to negotiate before notice of staff or to solve individual employee problems.

Strikes are allowed, but in some cases the right to strike can be restricted, and some professional groups are not entitled to strike. The exceptions apply, among other things, to hospital staff and employees in the nuclear, oil and gas industries. Militants, judges and prosecutors have neither the right to organize unions nor to strike.

Employment legislation and a new anti-discrimination law that came into force in 2009 prohibit all kinds of discrimination in the labor market, including in terms of gender, age and union membership. However, it appears that companies are forcing employees to step out of the union by threatening to resign or pay cuts. The International Trade Union Confederation (ITUC) has criticized the Anti-Discrimination Act for not providing union members with adequate protection against discrimination.

According to the UN refugee agency UNHCR, forced labor occurs in construction sites, factories, in agriculture and forestry and in the service sector.

Czech Republic’s former president, Václav Havel, dies. As a civil rights activist and playwright, he had been the leading voice during the Cold War in the fight against communist oppression in Eastern Europe. Havel turned 75 and is celebrated on his passing not only in the Czech Republic, where three days of country grief is announced, but all over the world.

After only a few weeks, VP leader Radek John resigns from the post of Deputy Prime Minister. He claims that he has not received support from the government for his anti-corruption strategy.

Due to a conflict with Prime Minister Petr Nečas, Deputy Leader Radek John is forced to leave the post of Interior Minister. He is appointed Deputy Prime Minister responsible for the Government’s anti-corruption policy.