Finnish labor unions play an important role in the labor market, although the number of members has decreased in recent years. The wage situation is high in international comparison. Unemployment is below ten percent, but among young people it is twice as high.

After the war years in the mid-1900s, Finland had major employment problems. This was because the fastest growing industries (first in industry, then the service sector) could not receive all the labor that had become redundant in agriculture. Even during the boom of the 1980s, Finland had a relatively high unemployment rate (about five percent). During the crisis in the early 1990s, it rose rapidly, and in 1994 a bottom listing was reached when almost one in five Finns went out of work. In the 2000s and 2010s, it was mainly industrial jobs that disappeared as demand for industrial products declined.

The Finnish Trade Union’s Central Organization (JRC) is an association of the country’s leading trade unions. About half of the JRC members work in industry, a third in the private services sector and a quarter in the public sector. The largest individual trade union is the Association for the Public Sector and the Welfare Areas (JHL).

The union has had a loss of membership during the 2000s, which is explained by the fact that more and more employees work in smaller companies where the role of unions is not considered as important. Many young people choose not to join the union because they have unsafe jobs and are thus more likely to change jobs and industry. 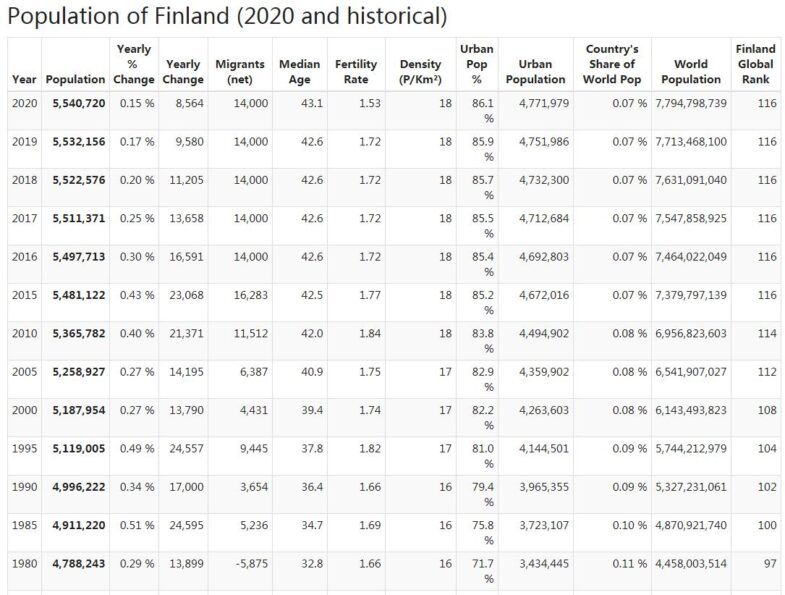 According to the law, employees in Finland are entitled to 30 days paid vacation and an ordinary working week is 35-40 hours. In Finland, wages are largely determined in central negotiations. It is not uncommon for the government to participate in the discussions as well. The wage situation is generally high and large wage increases in 2008–2009 are considered to have contributed to the economic downturn in the 2010s, as the competitiveness of Finnish industrial companies decreased due to high labor costs.

As a consequence of the country’s economy having shrunk for three years in a row, in the autumn of 2015, the government implemented a series of deterioration in the working conditions of public employees. Government employees increased their working hours by 24 hours a year without receiving higher pay. The number of holiday days decreased from 38 to 30. The overtime allowance was halved and the remuneration for working on Sundays was reduced from 100 percent to 75. A waiting day was introduced in case of illness. The government’s goal was to reduce the state’s labor costs by 5 percent.

The Greens leave the government

The Green Union leaves the government coalition because of a conflict over a new nuclear power plant. There are Russian interests in the power plant construction, which the Green League opposes the fear of increased Russian dependence.

Finland’s export industry senses Russia’s import ban on food from the EU. The Russian import ban is a response to EU sanctions on the Moscow government and its Ukraine policy (see Ukraine, calendar). Russia is Finland’s third largest trading partner (after Germany and Sweden) and a tenth of Finnish exports are purchased by neighboring countries in the east.

Parliament elected Stubb as new prime minister. In his government there are three new ministers, including Lenita Toivakka who becomes new EU and Trade Minister.

The government is demanding a farewell

The Katana government submits its resignation application, but it remains as an expedition minister until Stubb takes over. Stubb is known as a warm EU friend and he also advocates a Finnish NATO membership.

Union Minister Alexander Stubb is elected as the new leader of the Socialist Party at a party congress in Lahti. He will thus also become the country’s new prime minister shortly.

Party withdrawals from the government