It is difficult to talk about a normal labor market in Zimbabwe. When the economy broke down in the first decade of the 2000s, there were very few Zimbabweans with formal employment. The proportion of residents without a “real” job was estimated to amount to as much as 95 percent in 2009. Although the situation has improved somewhat, it is still estimated to be 80 percent.

Although the majority of Zimbabweans lack jobs, only a few percent registered as unemployed. The official unemployment figures (see fact box) thus give a distorted picture of the situation.

The lack of work causes millions of Zimbabweans to go abroad to work, primarily to South Africa but also to other neighboring countries and to the United Kingdom. Of those who remain, most support themselves by doing small-scale farming for their own households. Some are getting ahead in other ways in the informal sector, for example by driving a taxi, polishing shoes or selling things on streets and squares. Other important economic activities are smuggling, barter and illegal metal extraction in open pit and watercourses. 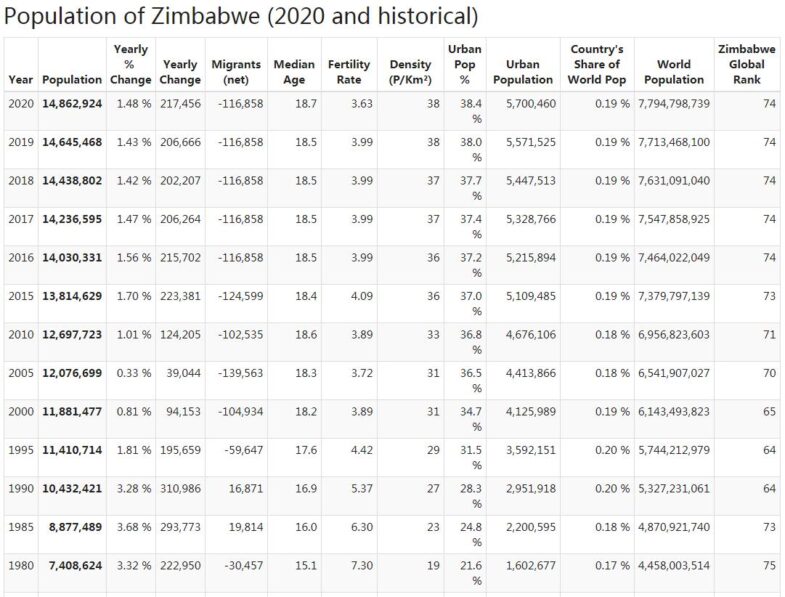 Most of those who have a job, most work in the service sector, such as the public sector, finance and hotels and restaurants. However, many public servants were left without pay when the crisis was at its worst (see Financial overview).

Most jobs have disappeared in export agriculture. Approximately 400,000 farm workers got off their jobs as a result of the land reform in 2000–2002 (see Modern History). Many jobs also disappeared in the manufacturing industry.

The Zimbabwe Congress of Trade Unions (ZCTU) organizes some 30 unions. ZCTU played a major role in the creation of the opposition party MDC (see Political system). Its party leader Morgan Tsvangirai was former secretary general of the ZCTU.

Military and police are blamed for death

To sharply push the people who objected to the outcome of this summer’s elections was “unjustified and disproportionate”, according to the inquiry commission appointed by President Mnagagwa after the unrest. The Commission with an international composition has been led by South African Kgalema Mothlante. The Commission blames the military and the police, but also points out that the opposition leaders stifled the protests. President Mnangagwe, who previously blamed the deaths on the opposition, says the government should study the commission’s recommendations carefully.

Doctors go on strike against lack of medication

Hundreds of doctors are launching a strike to demand that something be done to the medical shortage in hospitals and other health care facilities. Doctors also demand to get their pay in US dollars. Since 2016, a local version of the dollar has been used which, when introduced, was worth as much as the US currency but has since collapsed in value. The doctors return to work on January 10, 2019, following the promise that the state will meet their demands.

Several thousand people march through Harare in a manifestation organized by the opposition party MDC. The march is approved by the authorities and is the first held since the summer elections when six people were shot dead in connection with protests against the election results. Today’s protesters accuse President Mnangagwa of stealing victory in the election and blaming him for the escalating lack of basic commodities and gasoline.

Finance Minister Mthuli Ncube presents his budget for next year and announces that the salaries of senior officials in the public sector should be cut by five percent in an effort to reduce the country’s financial problems. The budget also includes plans to re-register all employees to clear the people on the payrolls who only raise pay but never go to work. The salaries of civil servants are a heavy burden for the state. The bill amounts to 90 percent of the state’s revenue.

The leaders of the country’s largest trade union ZCTU are arrested along with a number of activists just ahead of planned protest marches in the capital and other cities. Police have banned public meetings in Harare with reference to a recent outbreak of cholera. The union had intended to hold its manifestation anyway and protest against the recent dramatic price increases and growing commodity shortages. A recently introduced tax on electronic transactions is also rising.

The EU refuses the elections

This summer’s elections did not live up to international standards, the European Union election observers said in a report. The misunderstandings listed are, among other things, that voters were subjected to threats and coercion, that state media were on the side of the government party and that the results were not presented in a way that could be verified – for example, the results were not announced outside some polling stations after the vote, stipulates that this should happen.

President Mnangagwa appoints economist Mthuli Ncube as new finance minister. Ncube is a professor of economics at Oxford University and has been Deputy Director of the African Development Bank. Ncube faces the task of trying to repair the damage to the country’s economy that was generated under the reign of ex-President Robert Mugabe, writes AFP news agency. After taking office, Mnangagwa has replaced a number of ministers who have been in the government for decades, including the Minister of Defense and the Interior Minister.

Tendai Biti, one of the leaders of the opposition alliance MDC, is arrested when trying to flee across the border to Zambia. Biti intended to seek asylum in Zambia but is arrested by Zambian police and returned to Zimbabwe where he is threatened by a legal process. Biti is accused of calling for protests against the recent parliamentary elections. The unrest led to six people being shot dead (see July 30, 2019).

The Constitutional Court rejects the opposition’s demand that the presidential election be annulled due to election fraud. The Court considers that the opposition failed to prove that irregularities existed and states that Emmerson Mnangagwa prevailed. Two days later, on August 26, Mnangagwa is sworn in as president.

Opposition hopes for a regime change are shattered when the ruling Zanu-PF and President Emmerson Mnangagwa are awarded the victory in the parliamentary and presidential elections. According to preliminary results, Zanu-PF receives more than 150 of the 210 parliamentary seats and Mnangagwa wins with just over 50 percent of the vote, which means there will be no other round in the presidential election. Nelson Chamisa leader of the largest opposition party MDC claims that Zanu-PF and Mnangagwa won by cheating and says MDC should take the result to court. The election results trigger unrest in the capital Harare and six people are shot dead when soldiers are deployed to quell the protests.

A former Minister of Energy, Samuel Undenge, is sentenced to four years in prison for corruption. President Mnangagwa promised after his take-over in the fall of 2017 that his administration would not tolerate corruption, but the president’s critics say he did not do much about it. A number of former prime minister Robert Mugabe’s ministers were arrested for corruption and abuse of power in the months following the change of power. Undenge is the first to be sentenced. Other trials are ongoing.

Two people are killed when a hand grenade explodes at a party meeting with the ruling Zanu-PF. Nearly 50 people are injured while President Mnangagwa, who spoke at the meeting, escapes unharmed. Mnangagwa blames the attack on the G40, ie supporters of Grace Mugabe, wife of deposed President Robert Mugabe. Before the military forced Mugabe to leave his post in November 2017, G40 hoped Grace Mugabe would succeed her husband as president.

Zimbabwe wants to belong to the Commonwealth again

The Commonwealth announces that Zimbabwe has applied for re-entry into the organization. Zimbabwe left the Commonwealth in 2003 when the other member states excluded Zimbabwe for one year due to doubts about the presidential election in 2002. In the face of the risk of the exclusion being extended, Zimbabwe chose to leave the Commonwealth.

Friendship with China is confirmed

President Mnangagwa visits Beijing and is welcomed by China’s President Xi Jinping, who calls him “an old friend of China”. Mnangagwa received his military training in China in the 1960s when China provided guerrillas in Zimbabwe with weapons and training. China had a good relationship with Zimbabwe’s long-standing President Mugabe, even during the period when the West turned Mugabe’s back. Xi Jinping now promises to work for continued cooperation with Mnangagwe. The two presidents sign six cooperation agreements as well as an agreement on emergency food assistance to Zimbabwe.

State media say police are investigating whether deposed President Robert Mugabe’s wife Grace has been guilty of illegally smuggling ivory into black markets abroad. According to the evidence the police are studying, Grace Mugabe must have ordered state officials to give her export licenses for ivory, which she then sent to China, the United Arab Emirates and the United States.

Zimbabwe is one of 44 countries to sign a Free Trade Agreement at the African Union Summit in Rwanda. The agreement must be ratified at the national level before the AFCFTA free trade area can become a reality, but it is seen as a historically important step towards increased trade exchange within Africa.

The law governing corporate ownership (the Indigenization and Empowerment Act) is amended and a disputed section is abolished. According to the abolished section, foreigners were not allowed to own more than 49 percent of the shares in companies in Zimbabwe. The majority would be held by native Zimbabweans. However, this rule is retained for some mining companies. The change in the law is part of a plan that the government has staged to attract foreign capital to the country.

Chamisa is running for Mnangagwe

The largest opposition party MDC appoints 40-year-old Nelson Chamisa as the party’s candidate in the summer presidential election since the party’s long-standing and charismatic leader Morgan Tsvangirai died of cancer. Chamisa, a trained lawyer, has previously been the leader of the party’s youth association. He was also a minister in the national unity government that ruled Zimbabwe from 2009 to 2013.

Elections are announced for the summer

President Mnangagwa announces that presidential and parliamentary elections will be held in July. He promises that the elections will be fair and that he will accept the result if he loses. If Mnangagwa gets a chance to keep his promise and also does so, it means a clear improvement over the conditions prevailing under Mnangagwa’s hard-line representative Robert Mugabe. Under Mugabe’s rule, the opposition was threatened and harassed, and he was accused of rigging the elections to his advantage.

Anti-corruption investigators say they have launched an investigation into the doctoral title held by Grace Mugabe, wife of deposed President Robert Mugabe. Grace Mugabe earned her PhD at the University of Zimbabwe in 2014, but investigators are suspicious because she received her doctorate only a few months after she enrolled at the university (it usually takes many years to do her doctorate). The suspicions are reinforced by the fact that her dissertation was never published, which is contrary to the country’s academic tradition.