Unemployment in Zambia is high by Western dimensions, but does not deviate from many other sub-Saharan African countries. Only one in ten Zambians have a formal employment. About half of all unemployed people find their livelihood in the large informal sector.

There are no sure figures on unemployment. The official figures (see fact box) do not reflect the actual situation. Many do not go and register as unemployed because they are not entitled to any compensation.

Formally, all employees are covered by a social security network in the form of pension systems, regulated working hours, minimum wages, etc. But lack of money in the Treasury means that these insurance policies do not work as intended. 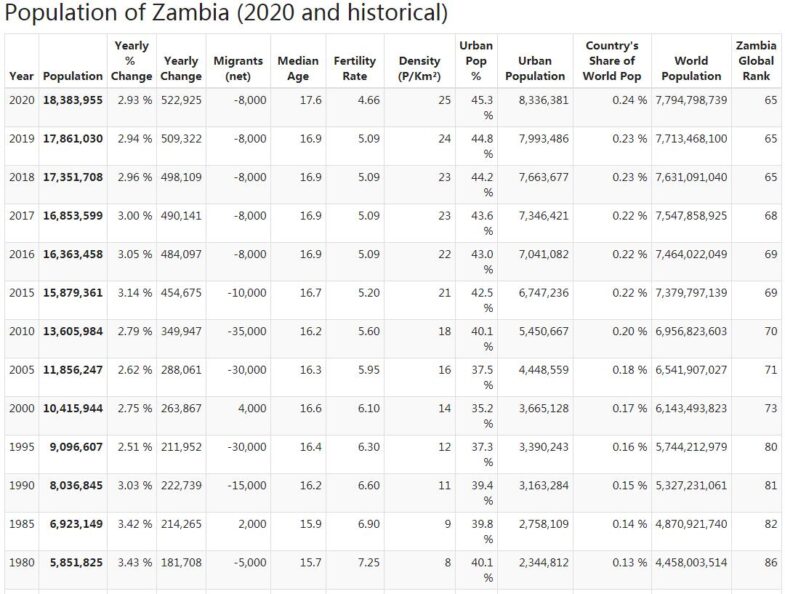 Freedom of association and assembly is statutory. However, the right to strike is severely limited by the fact that the authorities have the right to intervene against strikes in order to protect certain “important services”.

Just over five percent of the country’s labor force was estimated to be unionized in 2013. That year, Zambia’s largest trade union central organization ZCTU, formed in 1965, had about 277,000 members organized in just over 30 affiliates. The Miners’ Union is most powerful. The smaller country organization FFTUZ, formed in 1998, has about 50,000 members. In recent years it has been shaken by internal contradictions.

Sales of companies or industries and a large informal labor market are explanations for the low union connection. Conflicts have also occurred between different governments and trade unions. On several occasions, state and municipal employees have been laid off or threatened with dismissal due to union involvement or when they have been striking for higher salaries. In the private sector, workers do not often have to give up union membership in order to gain employment.

When workers protested in 2010 against the harsh conditions at a Chinese-owned mine in the Copperbelt, the Chinese foremen shot sharply and injured several workers. The presidents were later released in a trial. The event aroused strong emotions. The authorities were accused of being too lenient towards foreign investors, and the incident also fueled xenophobic flows, especially aimed at Chinese.

During the Sata government (2011–2014), foreign mining companies were warned that they could lose their licenses if the workers were laid off. The statements concerned investors.

President Lungu dismisses Army Chief of Staff Lieutenant Paul Mihova. The assistant army commander also gets the silk cord. Lungu does not justify why the two are dismissed, but warns Mihova’s successor William Sikazwe to abuse the authority conferred by the office and urges him to respect the prevailing hierarchy.

Six government-critical activists are released from charges of breaking the law in connection with a manifesto against corruption in September 2017. Protesters protested that the government bought 42 fire trucks worth SEK 8 million each. One of those liberated is singer and activist Chama Fumba, known as Pilato. The judge notes that none of the defendants violated the law when conducting a peaceful demonstration without damaging any property, causing traffic problems or disrupting the work of Parliament. The judge says it is rather the police who have broken the law by stopping the protest.

Jail for criticism of the judiciary

Zambia’s highest court confirms a prison sentence of 18 months for journalist Derrick Sinjela, convicted of court-martial. The Court notes that Sinjela has accused the judiciary of corruption without presenting any evidence. In an article, Sinjela had alleged that the Supreme Court has received bribes to change a verdict in a lower court concerning a dispute between a bank and a company. In November, a well-known anti-corruption activist, Gregory Chifire, was sentenced to six years in prison for criticizing the handling of the same legal case.

Green light for the president in the next election

The Constitutional Court states that President Lungu has the right to stand for re-election in 2021. The opposition with UPND at the head had taken the matter to court because of an unclear writing in the constitution. According to the constitutional text, a president may not sit for more than two full five-year terms. At the same time, a provision says that it should not be counted as a full term if a person succeeds a sitting president and is in office less than three years. Lungu succeeded Michael Sata after his departure in 2014 and the court finds that the 18 months that Lungu was president until the 2016 election cannot be counted as a full term. Thus, the coast is ready for Lungu to stand in the election.

Concerns are erupting in the cities of Buchi and Kawami following rumors that a Zambian timber company has been sold to Chinese interests. Domestic criticism of China’s presence in the country has increased as the government borrowed large sums from China and provided more and more lucrative contracts to Chinese companies. In October, young people looted Chinese-owned businesses in the city of Kitwe in the north after a Chinese business owner accidentally shot dead a Zambian employee. The government states that the news of the sale of the timber company is false and accuses the opposition of uprooting by spreading the news.

Minister is fired when British aid is interrupted

Emerine Kabanshi is dismissed from the post of Minister of Social Affairs. It happens the day after the UK announced that the country is freezing its aid to Zambia on charges of corruption against President Lungu and his ministers. Kabanshi is suspected of being involved in corruption regarding grant payments. The British decision is applauded by Harry Kabala who resigned as Foreign Minister in January 2017 in protest of corruption within the government. In addition to dismissing Kabanshi, President Lungu is trying to deal with the situation by asking for partial results from the commission previously appointed to investigate any irregularities.

Taxes on internet calls are criticized

The authorities announce that telephone calls via the Internet should be taxed as free calls via Skype, WhatsApp and Viber cause problems in the country’s telecommunications companies. From now on, it will cost the equivalent of 28 öre per day to make calls via the Internet. Calls over the Internet are important for organizing protests and other events and activists believe that the new tax could thus threaten freedom of speech

Amnesty condemns the arrest of a famous singer

Authorities allow the singer and activist Chama Fumba, known as Pilato, to come home when he comes home after four months abroad. Fumba fled to South Africa when he felt threatened by supporters of the ruling party PF who were critical of his song “The Rat in the Pot”. The song could be interpreted as a charge of corruption directed at President Lungu and his ministers. Fumba is arrested for failing to appear at a court hearing in a court case in which he and five others are facing criminal charges in connection with a fall 2017 protest action (see September 2017). Amnesty international condemns the arrest and calls it a “shocking demonstration” of how far the government is broad to go to silence critics.

The country’s debts abroad are visible

Finance Minister Margaret Mwanakatwe announces that the Ministry of Finance has initiated a review of the country’s debt. This happens after the IMF, the opposition and potential investors start to worry that Zambia has taken out large loans in secret, in the same way as neighboring Mozambique. When it was revealed in 2016 that Mozambique had more than one billion US dollars in unknown loans, the country slipped into a severe economic crisis.

The opposition party UPND sends a motion to Parliament to put President Lungu before the national court, but on the day that the motion is to be debated, Parliament decides to postpone the debate indefinitely with reference to the fact that the members need time to study the text.

A former minister and one of President Lungu’s chief critics are arrested by police. Chishimba Kambwili is accused of possessing property through criminal activities. Kambwili was a former foreign minister in Lungu’s government but has come into conflict with the president after accusing him and the government of being corrupt.

President Lungu is implementing a government reform. Half of the ministers are dismissed or given new posts. Margaret Mwanakatwe, an experienced bank manager and former Minister of Transport and Industry, becomes a new finance minister, which is expected to facilitate continued negotiations with the International Monetary Fund on emergency aid. Negotiations would have ended already in the summer of 2017 but have stalled as Zambia has not disclosed the details requested by the IMF regarding the country’s increasing foreign debt. At year-end 2017/2018, debt was estimated to have increased to 50 percent of the country’s GDP.

Foreign Minister Harry Kalaba resigns on his own initiative. In a social media message, he accuses the government of growing corruption and neglect of the economy. President Lungu replaces Kalaba with Joe Malanji from the opposition party MMD.