Nearly one in ten employees are found in agriculture in Uruguay, which is a high figure for a modern state and reflects the sector’s weight in the country. Just over a quarter work in industry and the rest in the service sector. Many support themselves outside the formal economy.

The proportion of the workforce that is informally employed, such as for example street vendors or divers workers, has steadily declined from a peak of 40 percent in 2004. Approximately one in four working people is now estimated to do so in the informal sector.

Unemployment also fell for the next ten years after the crisis year 2002, when it was 17 percent (see Financial overview). It then remained fairly steady for a few years until it turned upwards again and in 2018 the unemployment rate was 8 percent.

Association and strike rights are guaranteed by law and are generally well respected. The union business has long traditions in Uruguay. Trade unions are today an important political power factor. The PIT-CNT (Plenario Intersindical de Trabajadores-Convención Nacional de Trabajadores) land association has close ties to the left-wing Alliance that governs the country since 2005. Since then, collective bargaining has been re-established and job creation has been the focus of investment policy. 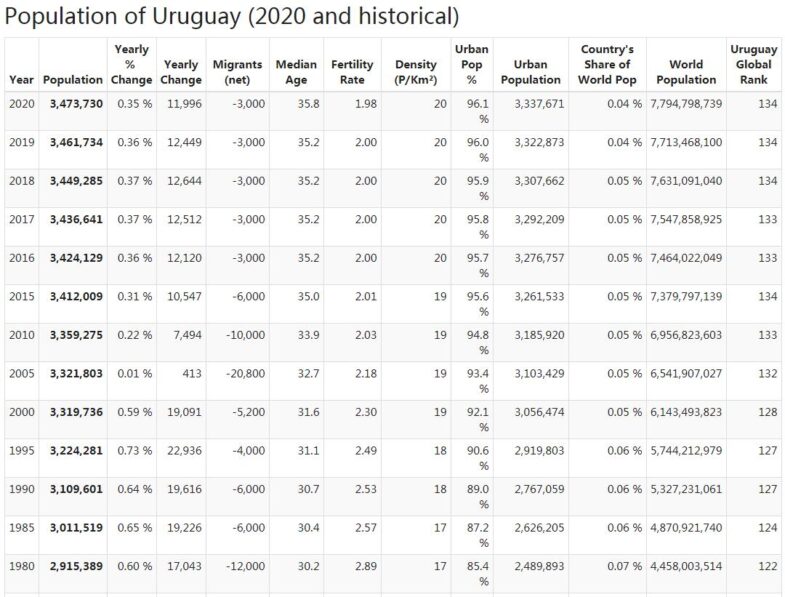 About 80 percent of the workforce in the public sector and 5 percent in the private sector are organized in PIT-CNT.

Four of the former Guantánamo prisoners (see December 2014) end a protracted three-week protest as they camp outside the US embassy, ​​having been promised better financial support from the Uruguayan government. They requested compensation from the United States during the protest.

Vázquez takes over as president

Before taking office, Tabaré Vázquez meets with representatives of the major opposition parties to maintain a dialogue. He offers them 25 seats on boards of state corporations and institutions, to distribute as they please. The parties accept the offer.

Uruguay receives six prisoners from Guantánamo military base in Cuba, after Mujica accepted a request from US President Barack Obama for “human rights reasons”. There are four Syrians, a Tunisian and a Palestinian who have been held in the American detention camp for twelve years, who now receive a sanctuary. The six were originally charged with conspiring with al-Qaeda but have never been charged. The public has been skeptical about the reception; 58 per cent said in an opinion poll in October that they opposed it. The opposition criticizes Mujica for having decided to accept the prisoners without consulting the Congress.

Vázquez wins in the presidential election

In the second round of the presidential election, Tabaré Vázquez wins with 53.6 percent of the vote, against 41.1 for Luis Lacalle Pou. Vázquez says that during its third term in office, Breda will focus on dialogue.

Left success in the first round of elections

In the first round of elections, it is better for the government coalition than the opinion polls gave reason to believe. According to preliminary results, Tabaré Vázquez and FA receive 48 percent of the vote, against 30 percent for Lacalle Pou and the Blanco Party, and 13 percent for Bordaberry and the Colorado Party. Thus, Vázquez faces Lacalle Pou in the second round of voting on November 30. The FA also retains its majority in the Chamber of Deputies, 50 of the 99 seats, but loses one in the Senate and receives 15 of 31 seats. Blancopartiet takes 32/10 mandate, Colorado party 13/4, Independent party 3/1 and Folk unity 1/0 mandate.

Sales of marijuana are postponed

Sales of marijuana will only begin in 2015 due to “practical difficulties,” President Mujica said.

Primary elections ahead of presidential elections

State visit to the United States

President Mujica visits Washington where he is praised by his American counterpart Barack Obama for his human rights efforts. The two presidents also discuss trade and education exchanges.

A report from the credit rating agency Fitch shows that Uruguay’s banking system is significantly stronger than in 2002, when it was hit hard by the crisis in Argentina. It is a welcome message given that the neighboring country is once again facing major financial difficulties.