A large part of the labor force in the United Arab Emirates is made up of foreign migrant workers without citizenship in the country. These often live in difficult conditions and, unlike the citizens, do not have access to free health care, education and other social benefits.

The government strives to increase the proportion of its own citizens in working life, not least on qualified items. Of the private sector employees, 98 percent are foreigners.

At the same time, a system has been introduced to attract well-educated foreign workers, who will be able to obtain permanent residence permits; similar lures have also been created for people investing in the emirate. Guest workers’ residence permits are otherwise linked to the employer through a system called Kafala. The system also occurs in other Arab countries and entails conditions characterized by arbitrariness.

Trade unions or other interest groups are banned, even for Emirati citizens, although the government has since 2004 promised to change it. In some cases, the authorities have chosen to tolerate workers who have not received pay strikes and demonstrate. In other cases, guest workers have been deported to their home countries. 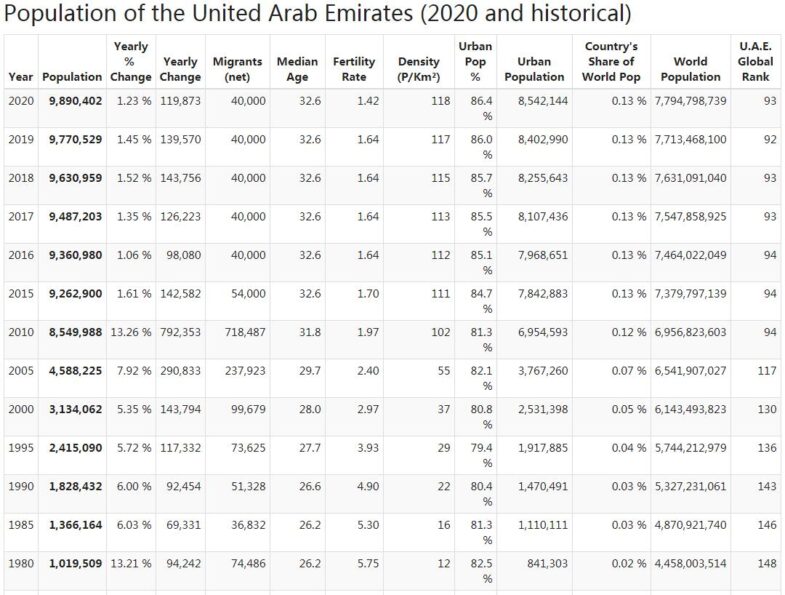 Unemployment is low in the official statistics, but cannot really be calculated in the usual way because foreign workers are often forced to go home if they lose their job. The average salary for citizens is twice as high as for legally immigrant, qualified workers. Abuse against foreign migrants, not least against domestic staff in the home, is common.

The new Federal National Council meets for the first time. Of the total 40 members, 31 are men and 9 are women. After the election, Amal Abdulla al-Qubaisi becomes the country’s first female president.

Guantánamo prisoners to the Arab Emirates

Five Yemeni prisoners held by the United States in the Guantánamo detention camp in Cuba since 2002 are flown to the United Arab Emirates.

Elections are held for the 20 electoral seats in the Federal National Council (see Political system). Important issues in the electoral movement are housing and healthcare, as well as education and work. A woman is among the victors.

Many soldiers killed in Yemen

Three days of national mourning are announced after 45 soldiers were killed in an attack by the Huthi rebels in Yemen. It is the biggest loss suffered by the country’s military.

Authorities state that 41 people have been arrested and will be facing the right accused for plans to “seize power and set up a caliphate” in the country. Those arrested must have planned to carry out terrorist acts.

As Saudi Arabia launches air strikes against the Huthi rebels in Yemen, the United Arab Emirates also participates, along with dozens of other states in the region.

Continued air strikes against IS

The United Arab Emirates resumes its participation in the US-led air strikes against the Islamic State in Syria. The flights were canceled when the jihadist group captured a downed Jordanian pilot in December. After the prisoner is burned alive in January, the United Arab Emirates promises to assist Jordan in the fight against IS and the attacks resume.