Tunisia has long had high unemployment. In recent years, the official figure has generally been around 13–15 percent, but far more people are underemployed and may be limping on to temporary work. Especially in the tourism industry, there are few permanent jobs. Unemployment is particularly high among young and newly graduated university students.

Women are to a greater extent than men outside the labor market, and among female academics, unemployment a few years into the 2010s was as high as 40 percent. More than a third of the country’s unemployed had been unemployed for more than two years. Most jobs are in the construction, trade or service sectors and do not require as much education.

While the number of jobs has decreased, the informal black sector has grown, with about one in four in the private sector working black.

Half of the workforce works in the trade and service professions, while a third work in the industrial sector and 15 percent in agriculture.

Tunisia has, since the beginning of the 20th century, been regulating, among other things, working hours, accident compensation and holidays for employees. There is also a statutory minimum wage. At the same time, the country has been criticized for the strict rules on the labor market that restrict mobility. 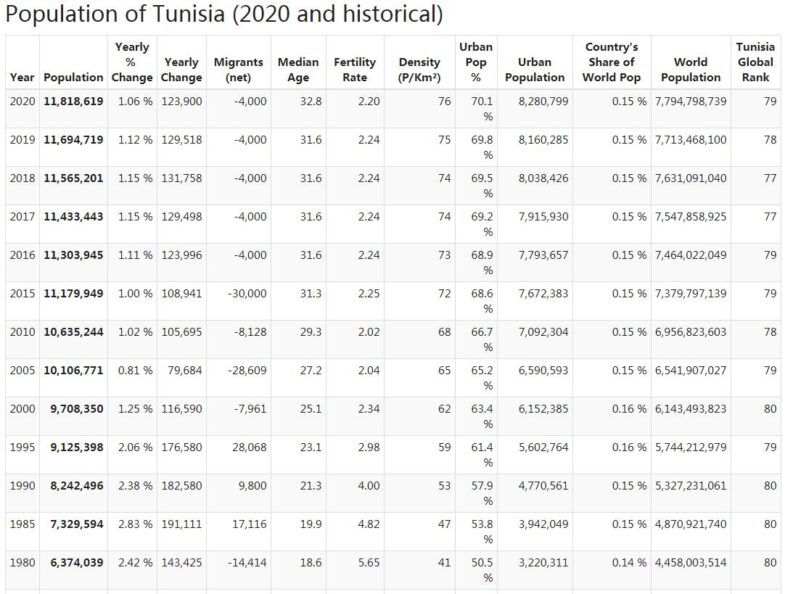 The country’s largest trade union UGTT has close to 750,000 members across the country. The UGTT was closely associated with the ruling party RCD during the Ben Ali era but acted independently on various occasions and initiated demonstrations against the regime. The unions also had an important role in the protests that led to Ben Ali’s fall in 2011. UGTT was also part of the Tunisian National Dialogue Quartet which was awarded the Nobel Peace Prize 2015 after establishing a political dialogue that managed to bring the country out of the political crisis in 2013 (see Modern History). However, the government has been criticized by other unions for only conducting negotiations with the UGTT and excluding other unions.

About 90,000 Tunisians have previously worked in Libya, not least in the oil industry. In connection with the civil war in 2011, many returned to their homeland. As a result, Tunisia also lost important revenue to the Treasury.

Hope is raised that the political deadlock can be lifted when the Ennahda government party and the opposition finally reach a deal to allow Industry Minister Mehdi Jomaa to lead the country until the 2014 elections. A new government is expected to be ready within a month.

The state of emergency is extended

A suicide bomber blasts himself to death on the beach in the tourist resort of Sousse. At the same time, police are reported to have averted a suicide attack on former President Habib Bourguiba’s (see Modern History) tomb in Monastir, a few miles from Sousse. The police then arrest five salafists who are said to belong to Ansar al-Sharia.

Eight policemen are killed in a fire in the province of Sidi Bouzid, after they surrounded a house where a group of suspected extremist Islamists were reported to be located. Several of the men in the house must also have been killed. President Marzouqki announces three days of country grief after the incident.

Enraged members of the security forces drive away President Marzouki and Prime Minister Larayedh as they participate in a memorial ceremony for two policemen killed by militant Islamists, some seven miles west of Tunis. The anger against the politicians is based on what is perceived as lack of resources to fight the Islamists. The security forces are said to have killed at least nine suspected members of Ansar al-Sharia after the attack on the police.

Settlement of a new government

The Ennahda government party and the opposition, led by the National Rescue Front, are signing a deal on a technocrat government to be appointed within a few weeks.

The government is ready to step down

The UGTT will mediate in talks between the opposition and the government, which will start at the end of the month and last for three weeks. The parties shall agree on a transitional government commissioned to prepare for elections.

Criticism from the UN

According to a UN report, thousands of people around Tunisia are imprisoned by militia groups, more than two years after the revolution. Many are subjected to torture and ill-treatment. It is estimated that around 8,000 people are being held without control by the state and the judiciary.

The group is held responsible for the two politician murders that triggered the political crisis. Prime Minister Larayedh also says that Ansar al-Sharia is behind the attack on the border with Algeria, and that the group has links to al-Qaeda in the Islamic Maghreb (Aqim). Ansar al-Sharia is said to have been formed in April 2011. The leader Seif Allah Ibn Hussein, also called Abu Ayadh al-Tunisi, sat in jail until the revolution. He is wanted for the attack on the US embassy.

Technocratic government should take over

Just over two weeks later, a protest week is announced by the National Rescue Front, an association of opposition parties. Thousands gather in Tunis with continued demands for the resignation of the Islamist-led government and a government made up of technocrats. They believe that the government has failed to gain control over extreme Islamists, and to improve the economy. The UGTT has mediated the crisis and Ennahda should in principle have accepted a technocrat government, but wants to negotiate more on the details.

The UGTT demands that the government hand over power to a party-bound expert government. Ennahda’s management rejects the demand to replace Prime Minister Larayedh, but says he is willing to discuss an extension of the government. The Constituent Assembly is suspended. The Speaker says that the work of writing a constitution and election law resumes when a “dialogue is started”. Over 70 members of the congregation have now resigned since the assassination, and have organized sitting strikes outside its Tunis building. The opposition continues to demand the government’s resignation in demonstrations. UGTT urges its 600,000 members to participate.

The army launches an offensive against Islamists. Both ground troops and combat helicopters are included in the operation at the Algerian border.

Everyone has had their throats cut off. They took part in investigations for suspected al-Qaeda members in a mountain area near the Algerian border.

Prime Minister Larayedh rejects the demands of the UGTT, among others, the dissolution of the Islamist-led government and proposes that general elections be held on December 17.

Requirements for the government to resign

Concerns erupt in Tunis in connection with the funeral of al-Brahmi. Between 10,000 and 20,000 people demand the resignation of the government and riot police deploy tear gas to disperse the protesters. 42 members of the Constituent Assembly say they are retiring and demand that a unifying government be appointed.

Opposition politician Mohamed al-Brahmi to death in Tunis. He was a member of the Constituent Assembly and party mate of Chokri Belaid who was murdered in February. The murder triggers violent protests around the country. The national organization UGTT announces a general strike and all flights to and from Tunisia are canceled. According to the government, al-Brahmi was shot with the same weapon used in the murder of Belaid. The Minister of the Interior casts blame on the conservative Salafis movement and designates a named person as the main suspect.

French President François Hollande arrives at the first French state visit since the 2011 revolt. Hollande calls Tunisia “a model in the region” that shows that Islam and democracy can be combined. He also promises EUR 500 million in support of the democratization process.

Twenty people are convicted of involvement in the attack on the US embassy in September 2012 (see September). The sentence will be two years conditional imprisonment.

The government bans the Salafist group Ansar al-Shariah to hold an annual meeting in the holy city of Kairouan, citing public safety. It results in violent clashes with police in Kairouan and on the outskirts of Tunis. A member of the feminist group Femen, Amina Tyler, has been arrested since writing the group’s name at a mosque. A trial begins almost two weeks later where she is charged with carrying a “flammable object”, a jar of pepper spray.

Tunisia recovers $ 29 million in looted assets reported by former President Ben Ali in an account in the wife’s name, in Lebanon.

Decides that a constitutional proposal should be ready by July – and that presidential and parliamentary elections be held between 15 October and 15 December;

Larayedh presents a new coalition government for President Marzouki. The same parties are included as in the previous: Ennahda, Ettakatol and CPR. The government is also supported by some independent candidates. However, Ennahda has given up control of several important ministerial posts, such as the Foreign Minister of Defense and Home Affairs, which are now occupied by persons without political residence.

Four people are reported to have been arrested for involvement in the murder of Belaid. They are said to belong to a radical religious group. The actual killer is still on the loose, says the Interior Minister.

Two weeks after the murder of Belaid, Jebali, who promised to leave his post, resigns if he fails to form a new government. Ennahda entrusted Interior Minister Ari Larayedh with the task of forming a new government.

CPR, threatens to step down from government cooperation, as the party’s demand that the Foreign Minister and the Minister of Justice be replaced has not been obeyed. The CPR believes that the ministers – both Islamists – are not doing their job satisfactorily.

A general strike was announced in protest of the murder, which is blamed on the government. It paralyzes large parts of the country. Hundreds of thousands of people gather in Tunis in connection with Belaid’s funeral. Some clashes between protesters and police occur.

Prime Minister Jebali dissolves the government and announces new elections. He announces that a technocrat government will take over and rule the country until the election, which will be held as soon as possible. But the following day, the leading government party Ennahda rejects the decision to dissolve the government. The Prime Minister is thus on a collision course with his own party.

A leading politician and human rights lawyer, Chokri Belaid, is shot to death outside his home in Tunis. Belaid was a leader in the left-wing, secular party Democratic Patriotic Movement, which is part of the increasingly loud opposition to the government. It is the first political murder in the country since the revolution. Protests immediately erupt around the country. Military is sent to Sidi Bouzid. President Marzouki returns home prematurely from a visit to France.

The Minister of Culture promises that the government will take measures to protect Sufis mausoleum (see Religion), which is considered part of the Tunisian cultural heritage. Up to 40 sanctuaries have been completely or partially destroyed in attacks that Salafists have been behind in eight months, says the leader of a newly formed Sufi association.