A visa is required for German citizens to enter Benin, which must be applied for at the Benin embassy in Berlin before the start of the journey. The electronic visa (eVisa) was introduced on April 30, 2018. The application can only be submitted in this way. It is not possible to issue a visa at national borders or at the airport. Together with the passport, which must be valid for at least three months beyond the duration of the desired stay, copies of the return flight tickets and an international vaccination card with proof of yellow fever vaccination are required when applying for a visa. Honorary consulates working for Benin are based in Munich, Troisdorf and Saarbrücken.

An issued multiple entry visa is valid for 90 days. An extension can be requested from the immigration office in Cotonou before the visa expires. A penalty of 25,000 FCFA is currently due for each week of infraction. For longer stays, the visa must be converted into a residence permit.

To transfer money from Benin to Europe and vice versa, you can use the very fast and secure services of Western Union, Money Gram or WorldRemit. The larger banks in Benin are Ecobank, BOA (Bank of Africa), Société Générale du Bénin and BIBE (Banque Internationale du Bénin). Here again the exchange rate Euro (€) – Franc CFA (XOF).

According to hyperrestaurant, Benin has a whole range of tourist attractions to offer, all of which are relatively easy to reach. A good road map for Benin is published by IGN Paris and the ‘Petit futé Bénin’ is definitely recommended as a travel guide. On the beach west of Cotonou, on the ‘Route des Pêcheurs’, there are various restaurants, beach bars and hotel complexes ranging from very simple to luxury class. Useful information on tourist attractions, hotels and national parks can be found online. A collection of films and video clips about the natural beauties and other attractions has put together ‘Eco-Bénin’.

The traffic in Cotonou leaves a strong impression on every newcomer: loud, chaotic and dangerous. The latter in particular should not be underestimated, because the number of accidents is very high. Especially the moped taxis, the Zemidjans, are very often involved in traffic accidents. Traffic and the number of accidents are also increasing in the north. If you have the opportunity to use a car with a driver, you should do so too. Within the big cities (Cotonou, Parakou, Djougou, Natitingou…) you can move cheaply and safely with Benin Taxi. To travel overland, you can use a bush taxi or air-conditioned coaches on the frequent routes. The bush taxis usually drive fixed routes, they leave when all seats are occupied. There are always 2 places on the passenger seat, so it will be tight. Always take a close look at the vehicle before you get in as the condition of old cars can be appalling. Several places can also be rented. The buses have fixed departure times, are slower than the bush taxis, but are safer. 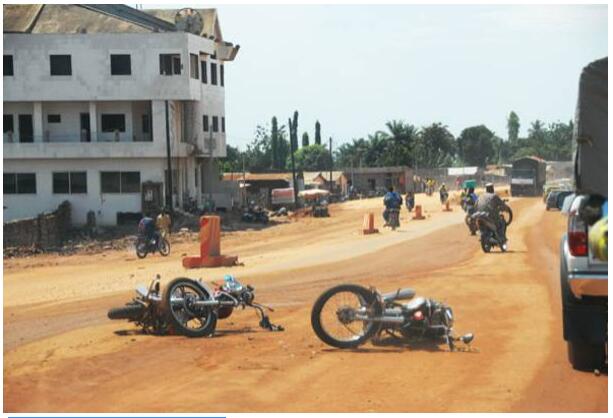 Overall, Benin is a relatively safe country to travel to, but this only applies to a limited extent. But the new political developments with the exclusion of the opposition parties could lead to political instability.

After dark, you shouldn’t drive outside the cities. Unlit streets, broken down, unsecured vehicles or simply vehicles with defective headlights can lead to accidents. There are also raids on the country roads at night. It also happens that roadblocks are set up with fake police officers and vehicles are robbed.

Crime is higher in the city of Cotonou than in other parts of the country. Basically, you should always hire a night watchman for your house. You can obtain information on the security situation from the Federal Foreign Office or in the current report from the US Department of State; if necessary, you can obtain information from Police Republicaine du Benin. There have also been several heists of markets, banks and shops in Cotonou recently, which made headlines across the country.