In Danish medieval churches there are frescoes with motifs from scenes reminiscent of the European mystery games, in particular depictions of the hell gap that were a permanent component of the mystery games in France and Germany. From 1574, however, the game is known about St. Knud, a miracle game about the saint king who was killed in 1131. It was probably a simultaneous game, ie something is happening at several venues at the same time. The first regular dramatic performances related to text performances are the humanist school comedies of the 16th century, with role models in ancient Latin comedies and probably played on platform scenes. In connection with the coronation of Christian 4 in 1596 a trionfi was arranged or festive performances in Italian pattern, with allegorical tablecloths on carts. In 1634 a court ballet was built according to French design, and in 1686 a backdrop scene was built to accommodate French court theater troops. However, the building burned down in a fire that claimed 200 lives. René Magnon de Montaigu, a former French court theater actor, was behind the first attempt to create a professional theater in 1722. 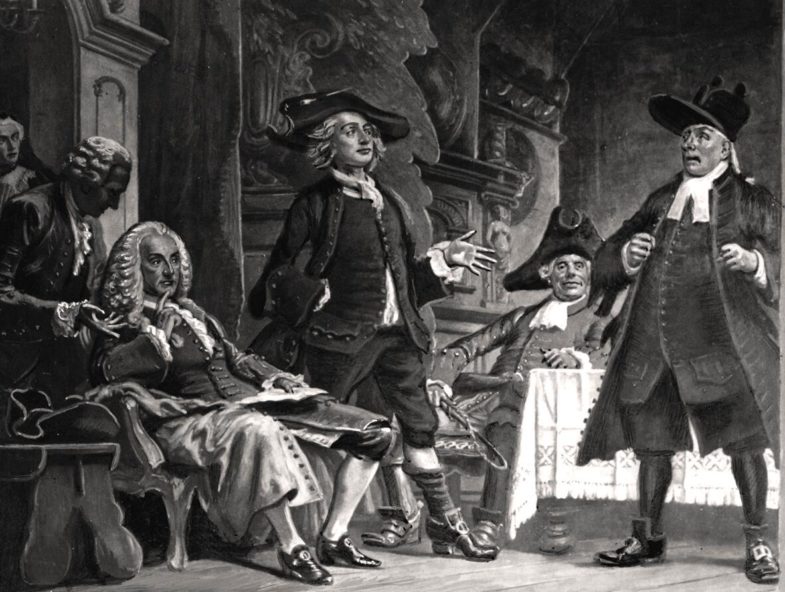 Denmark. The first Danish theater was created in 1722 in Lille Grønnegade. Over the course of five years, 26 comedies were performed by Ludvig Holberg. The picture shows him (sitting to the left) during a trial of Erasmus Montanus. Painting by V. Rosenstrand.

The Danish Scene Square was located in Lille Grønnegade, and Ludvig Holberg was encouraged to write comedies in Danish. This resulted in the so-called poetic raptus, and a large number of his comedies were performed in the few years the theater existed. It closed in 1728 after a major urban fire and a pietistic wave caused all theater activities to be banned for several years. A new initiative came in 1748, when a new company was founded, and became the theater that came to be called the Royal Theater, eventually with firm support from the court. Thus, a Danish national theater was founded, and for a long time the French pattern had the privilege of playing the classic Danish repertoire.

A romantic playing style gradually takes over for the classic declamatory, and in this process, Norwegian-born actor Michael Rosing is central. The first Danish theater outside Copenhagen was opened in Odense in 1792, and was noted for playing Shakespeare for the first time in Denmark. 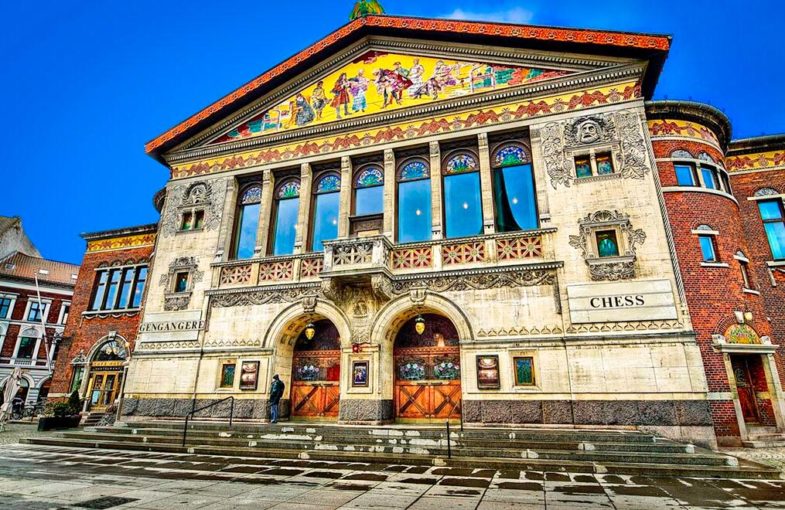 The bourgeois drama eventually got a break, and August von Kotzebue in particular was often played in Copenhagen. In addition, the romantic repertoire with Adam Oehlenschläger will play a central role in historical dramas such as Håkon Jarl in 1808, and eventually the German Sturm und Drang drama gained entry, especially with Friedrich von Schiller. In the mid-1800s, Johann Ludvig Heiberg was head of theater at the Royal Theater, and his time was marked by his polemics against the romance and the cultivation of classicism. He was married to Johanne Luise Heiberg who was one of the central actors of the time, at the intersection of romance and realism.

The Private Theater Casino from 1850 was the first theater to give the Royal Theater serious competition, with the first Ibsen performance in Copenhagen and with the world premiere of Strindberg’s Father in 1887. The Folketeateret opened in Copenhagen in 1857 and set up pieces that were rejected by the National Theater. Michael Wiehe and Frederik Høedt were also central actors of the time, in addition to Betty Hennings, who has become known as the very first Nora in Ibsen’s Et Doll House. It was in a set by William Bloch at the Royal Theater in 1879, and must be seen in the context of Bloch’s significance for the breakthrough of realism and modern directing art in Danish theater.

In the early 1900s, the regional scene in Aarhus and Odense was opened. Max Reinhardt’s style eventually gained importance for Danish theater by giving realism a touch of stylization. The daytime theater was central to this development, and in 1928 Edward Gordon Craig had the stage design for a performance of Ibsen’s King ‘s subjects. A theater characterized by retreatalization had a breakthrough with directors such as Per Knutzon, Holger Gabrielson and Svend Methling. New private theaters were created that were to become important for the post-World War II era as well, such as the Betty Nansen Theater of 1917, which focused heavily on playing new drama. One of the most important, however, had been the Dagmarteatret (1883-1937), where Bjørn Bjørnson was a theater manager for a period. Kaj Munk and Kjeld Abell were among the most important dramatists in Danish theater from the 1930s with pieces such as The Word and Melody that disappeared. During the German occupation, theater operation went almost as normal, but it was characterized by political censorship. Nevertheless, the auditions were of particular importance during this time.

A new theater building at Kongens Nytorv, which was to house the Royal Theater, had been completed in 1874. Here, opera, ballet and dramatic theater were to be performed. This periodically led to a weakening of the theater, while at other times it led to successful collaborative performances across the three main branches. In order to strengthen the dramatic theater, the New Scene was opened in 1931, and several intimate scenes have been founded in time to sharpen the theater’s competitiveness in relation to the private theaters. 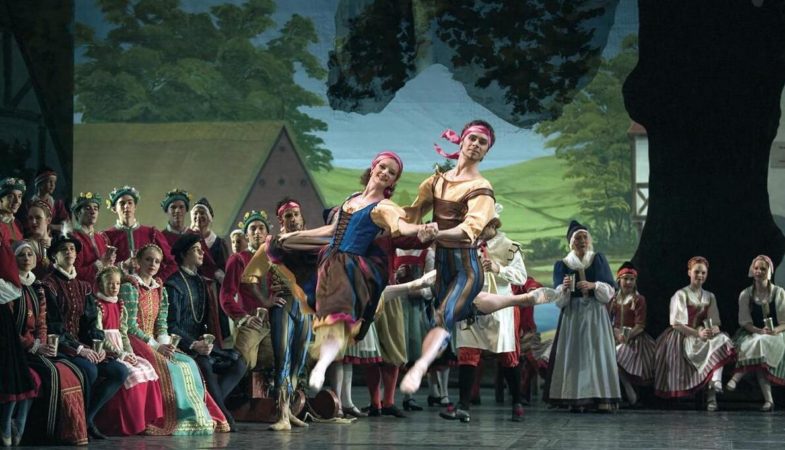 After 1945, the private theater Det Ny Teater in Vesterbro became very important, and the Royal Theater had to deal with an ever-stronger competition from both the other scenes in Copenhagen and the regional scenes that came on the offensive, by aiming for a new European drama before Copenhagen. This was the case, for example. the focus on absurdism at the Århus theater in the 1960s. A spatial theatrical reggae theater was expressed at the Aalborg theater in 1970 with Kaspar Rostrup’s (b. 1940) production of Ibsen’s Peer Gynt., when removing the plush of the salon to allow the game to take place there. The Labor Movement’s Theater Central had been established in 1946 and created ARTE, a subscription scheme that helped draw larger audience groups to the theater. The scheme still applies, but has at times been debated because of. that the shows have been sold before they have been finished and rewritten in the newspapers.

From the 1960s, a group theater movement has emerged, in addition to the fact that newly trained directors have largely used the private theaters in Copenhagen, such as Aveny and Rialto, where the new European drama of the 1980s has largely been set up. To meet the competition, the Royal Theater has created new intimate scenes, such as the Comedy House in 1970 and the Gråbrødrescene from 1981/82. Leading actors include Ebbe Rode, Erik Mørk, Ghita Nørby and Lone Hertz, and central directors associated with the national scene have been Sam Besekow and John Price, Edvin Tiemroth and Klaus Hoffmeyer.

Besekow in particular has left traces on a Nordic basis, and there are heavy, text-based, but stylized productions he has behind him. Alongside Kaspar Rostrup, several younger directors were prominent throughout the 1970s and 1980s, such as Peter Langdal and Hans Rosenquist. They sought out the fixed scenes, and Peter Langdal’s performances in Østre Gasværk outside Copenhagen, together with the scenographer Karin Betz, became very important. Kaspar Rostrup’s performances at Gladsaxe Theater have also been significant through their search for the open space, with impulses from Théâtre du Soleil as well as from Peter Brook. With its roots in the group theater movement and the political theater of the 1960s, several smaller theaters such as the Violet Theater in Copenhagen in 1962, the Svalegangen in Aarhus in 1963 and the Virgin Ane Theater in Aalborg in 1967. Opened The solar car at Christianshavn and others. asked new questions about the function of the theater and sought to reach audience groups that traditionally did not go to the theater. The outdoor action theater of the Solvwagen was particularly noteworthy. From 1966 Odinteatret established itself in Holstebro and made Denmark internationally known as a theater country. The new visual drama forms gradually broke through with the Visual Theater (1977–85), which was inspired by Robert Wilson, and the sequel, Hotel Pro Forma, started in 1985. It became a trendsetting, visually oriented Danish project theater led by Kirsten Dehlhom. Her performances are highly formalistic and use texts by leading Danish writers. In 1984, an interesting project theater environment has developed in Århus around Exment,

In recent years, Danish theater has been characterized by a new orientation towards the institutional theaters. A large number of new plays have been set up and a new generation of theater workers has emerged.