The History of Denmark Part V 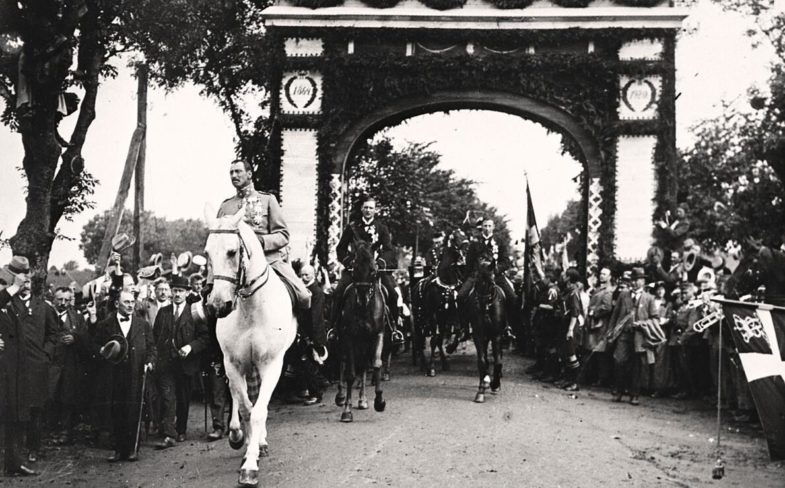 Christian 10s entered North Schleswig after the referendum in 1920. The area had become Danish again after 56 years of German rule.

An important task for the government during the First World War, with Erik Scavenius as Foreign Minister, was to try to maintain Denmark’s neutrality. An approach to Norway and Sweden came into being, and several meetings were held between the kings and the governments of the three Scandinavian states. During the first years of the war, Denmark traded with both the United Kingdom and Germany, but the unrestrained submarine war of 1917 led to shortage of goods, price increases and social unrest. The government then introduced maximum prices, a certain rationing and state control of trade. The issue of the sale of the Danish West Indies to the United States in 1916 led to strong political strife, which ended in a referendum, the first in Danish history, approved the sale. In 1919, workers were required to complete the eight-hour day.

At the defeat of Germany in 1918, the issues of Southern Jutland would create bitter political strife. In November 1918, the Danish Southern Jews raised demands for incorporation into Denmark following a referendum. The Treaty of Versailles in 1919 decided that the area should be divided into two zones; a northern zone 1 and a southern zone 2, where a referendum would decide whether the areas would be incorporated in Denmark or remain German. By a vote in zone 1 in February 1920, there was an overwhelming majority for affiliation with Denmark, while the March election in zone 2 (including Flensburg ) gave a large majority to remain German. The government wanted to respect the result of the vote, but a strong movement was initiated, supported by the opposition, so that at least Flensburg should become Danish.

At the same time, there was a strong tension and political turmoil because employers had rejected workers’ wage demands and notified the big lockout. This triggered the so-called Easter crisis in 1920 with strong unrest and violent demonstrations in Copenhagen.

In 1918, Iceland was declared a sovereign state in personnel union with Denmark. In 1920, Denmark joined the newly formed League of Nations after a unanimous parliamentary decision. In 1922 a new defense system was introduced, and the same year an import regulation for certain particularly affected industrial branches. Nevertheless, the krone fell sharply, and the world of money was haunted by a number of breakdowns, including the important Landman’s Bank in 1922.

The election in 1924 led the Social Democrats to become the largest party in the Parliament. Thorvald Stauning formed with radical support the first Social Democratic Ministry. This put forward proposals for disarmament, corporate councils and increased social benefits that were unsuccessful in passing in the County Council, where the Liberal Party and the Conservatives had the majority.

During a new economic crisis, the krone rose again to par ; the ministry made proposals for cures for the crisis and dissolved the parliament in 1926, when it could not win the radicals for its proposal. After the election, Thomas Madsen-Mygdal formed a pure left-wing government with conservative support. The Ministry undertook the implementation of cuts; thus, the state’s annual expenditure fell by about NOK 50 million, and taxes could be reduced somewhat. But the government was at odds with the Conservatives, not least because of a proposal for a new defense scheme and reduced defense spending, and in 1929 the budget proposal was voted down in Parliament.

Denmark’s demands on all of Greenland met resistance in Norway at this time, which in 1931-1932 occupied a few land routes in East Greenland; but when the case was brought before the International Court of Justice in The Hague in 1933, Denmark prevailed. A new Penal Code was passed in 1930, and later proposals for disarmament, company councils and increased grants for social purposes were gradually put forward and implemented. A proposal for a new constitution that abolished the County Council was passed by both things, but did not win sufficient support in a referendum in May 1939. That same year, Denmark agreed to a mutual non-attack pact with Germany, like other neighboring states of Germany.

Although a new defense system of 1937 strengthened the defense somewhat, it was a militarily weakly equipped Denmark that on April 9, 1940, met the German attack on the country. The king and the government decided that it was useless to provide further military resistance, and after a German promise that Denmark’s political independence and territorial integrity be respected, orders were given to cease all Danish military resistance. The Danish Nazis launched a violent propaganda and rioted to get a transformation of the government so that the country could be Nazified as quickly as possible. This made it necessary for the four major parties and the League of Laws to negotiate to show that a clearly cooperative government could be formed without leaving the parliamentary foundations and without including the Nazis. On July 8, therefore, a new government came with Thorvald Stauning as prime minister. When he died in 1942, Vilhelm Buhl took over as new head of government.

Foreign Minister Erik Scavenius stood as the foremost representative of the politicians who wanted to lead the country through the occupation with the least possible destruction and loss of human life. The resistance movement attacked this resilient line, but it was not until 1942 that there was a broader support for a more active resistance struggle against the German occupiers and their aides.

The Germans now hit a tougher line against Denmark. Scavenius became new prime minister. The new government was granted extended powers to maintain peace and order. However, the resistance movement grew, and during the spring and summer of 1943 a number of acts of sabotage and so-called folk strikes occurred. The Germans made extensive demands on the government to put an end to the sabotage. Under the pressure of extensive mass demonstrations, the government rejected the demands and, together with Parliament, came out of office. On the same day (August 29, 1943), German troops attacked Danish military outposts, and after a short battle the Danish army was disarmed. On the other hand, they failed to catch the fleet; it was lowered by its own crews.

From now on, the Germans took over all power in the country. For the rest of the occupation period, the civil administration was held by the officials, the “head of department”. When the resistance movement went into liquidation of denizens (“sticks”), the Germans and their Danish aides responded with the so-called “clearing murders”. Among the first victims was the poet priest Kaj Munk. On May 5, 1945, the German forces capitulated in Denmark. On the same day, a unifying government of parliamentary politicians and people from the resistance movement joined, with Buhl as prime minister and John Christmas Møller (from 1942 leader of the Danish Council in London) as foreign minister.