The History of Denmark Part IV 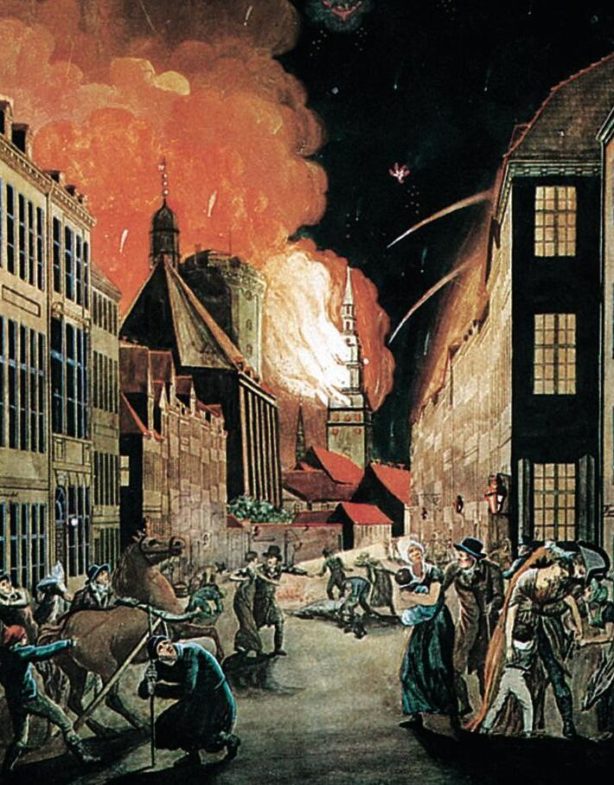 Denmark participated in the Napoleonic Wars on France’s side. The picture shows the fire in the tower of Our Lady Church during the British bombing of Copenhagen the night between September 4 and 5, 1807. Stick out after drawing by CV Eckersberg.

In defense of foreign trade, the empire in 1780 entered into an armed neutrality alliance with Russia and Sweden. The new Armed Alliance of 1800 (together with Russia, Sweden and Prussia) led to the peace break with the United Kingdom and the Battle of Copenhagen on April 2, 1801.

Denmark-Norway’s foreign policy orientation towards France was the reason why the British bombed Copenhagen in 1807 and put the Danish war fleet out of play, an event referred to as the Navy Fleet. Crown Prince Frederick (King 1808-1839 under the name Frederik 6) then declared Britain war and made a covenant with Napoleon. The years 1807-1814, when Denmark-Norway participated in the Napoleonic wars, entailed colossal war expenses with the resultant banknote inflation and contributed to the total state bankruptcy in 1813. At the peace in Kiel on January 14, 1814, Frederik 6 had to renounce Norway to the Swedish king, but had to retain Iceland,Greenland and the Faroe Islands.

The years leading up to about 1830 were characterized by economic depression which hit both the citizens and the farmers hard. Easier outlets for and rising prices for grain contributed to the improved business cycle from the 1830s. When cheap overseas grain from the late 1860s saw grain exports unprofitable, Danish agriculture managed to adapt to a new market situation in a very short time and based its production on exports of butter, eggs, meat and bottles, mainly to England.

Influenced by the national- liberal movement in Germany, from around 1830 a demand for a freer position for Schleswig and Holstein in the Danish monarchy arose. In 1848, Holstein and the German-speaking Schleswig revolt supported by Prussia, which, however, after Russian pressure ended separate peace with Denmark in 1850. The monarchy was restored, but no longer-term solution to the Schleswig-Holstein question was reached.

After the Battle of Dybbøl in 1864, Denmark had to renounce Holsten, Lauenberg and the whole of Southern Jutland. After five weeks of siege, the Prussians went on April 18 with threefold powers to storm, captured the sconces and drove the Danes over to Als.

In the middle of the war, Frederick 7 signed the new constitution (the June Constitution of 1849). The monarchy was abolished, a parliament with legislative and granting power was created, divided into two chambers, county councils and parliament. Following pressure from the German states and Russia, the June Constitution did not apply to Schleswig.

Domestic politics, the lost war in 1864 led the national liberals to lose leadership. In 1870, the “peasant friends” founded the United Left, gained a majority in the parliament in 1872, and demanded parliamentarism immediately. During the 1870s, a right-wing party was formed by some of the national liberal and landowner politicians, who received broad support from the bourgeoisie in the cities. Against the Left’s “parliamentary parliamentarianism,” the Conservatives argued that both chambers had to be equal, and that the king was free to choose his own ministers.

The Left tried to force through the parliamentary system by allowing the Parliament to refuse to pass the Finance Act (budget). However, this policy failed after the Ministry of Estrup (1875-1894) issued provisional finance laws without parliamentary decisions. In 1882, the Left embarked on the so-called “withered policy”, that is, it was systematically denied the Folketing to adopt any important government proposal. This was not the case either. At the so-called provisional offices, Jakob Estrup succeeded in implementing the government’s proposal without the approval of the Parliament. In the 1890s, a certain approach took place between the Left and the Right, and a number of social reforms were implemented, including poverty law, old-age insurance and sickness insurance law.

After the 1901 election, a pure left-wing government was appointed with Johan Henrik Deuntzer in the lead. The strong man in the new ministry was the leader of the Left Reform Party (founded 1895) Jens Christian Christensen, who became head of government in 1905. Many important reforms were implemented during this time, including new tax system and a more humane criminal law. Disagreement over defense policy led to the founding of Radical Left in 1905, a social-liberal party that advocated the reduction of defense spending. A new constitution of 1915 gave, among other things, voting rights to women and introduced proportional elections.