The History of Denmark Part III

War and loss of lands

During Frederik 2, the Nordic Seven-Year War, which lasted from 1563 to 1570, began as the first of a series of settlements with Sweden in the period up to 1720 on the position of superpower in the Nordic and Baltic Sea regions.

During Christian 4, the king’s power was strengthened by supporting citizens and peasants against the nobility, and a mercantilist industrial policy was pursued. The Øresundtoll brought large sums. An unfortunate foreign policy with the wars against Sweden ( Kalmar War 1611-1613, the German war 1625 to 1629 and Torstenssonsfeiden in 1643-1645) undermined the king’s position toward the national council, especially for peace in Brömsebro in 1645, when Denmark had to cede Gotland and Norway Jamtland and Härjedalen to Sweden.

After the Crab War (1657–1658), Denmark had to renounce Skåne, Halland, Blekinge, Bornholm and Norway Norway Båhuslän and Trondhjems län by the peace in Roskilde in 1658. The dominion over the two Norwegian border towns Idre and Särna was also lost during the war. After a new war, Denmark regained Bornholm, and Norway regained Trondhjems county by the peace in Copenhagen in 1660. 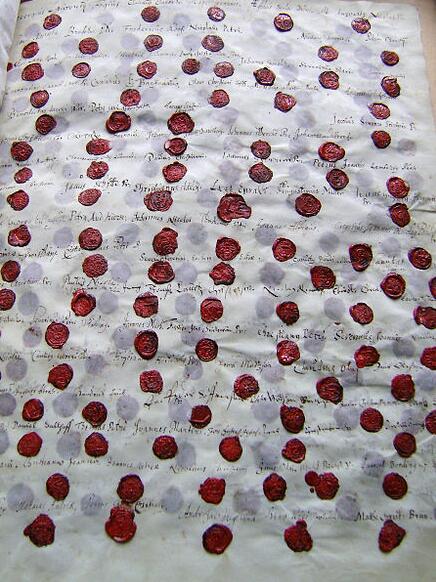 With the Enevoldsarvergerings act, the monarchy was formalized, and Denmark made Frederik 3’s ancestry. 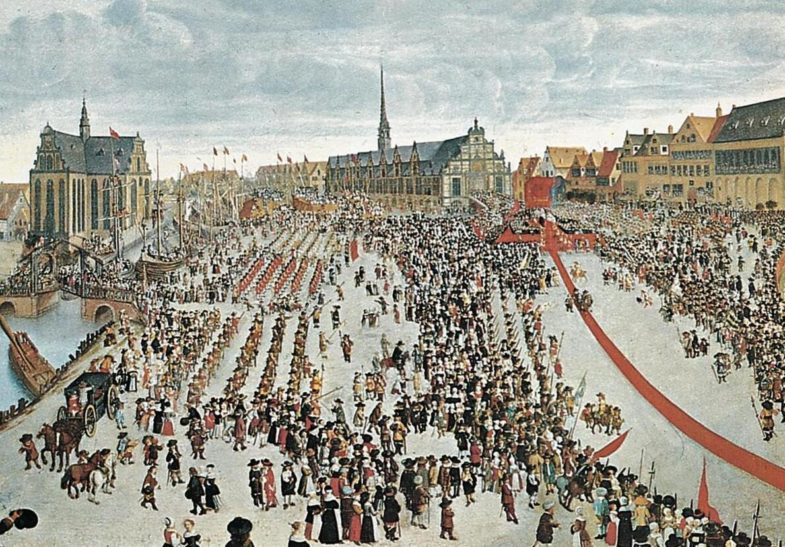 Inheritance shelf October 18, 1660 in the square in front of Copenhagen Castle. Excerpt of painting by Wolfgang Heimbach from 1666. The castle is just to the right of the picture. The king and queen were carried across the Castle Bridge and placed on a grandstand in front of the stock exchange, which is seen in the middle of the picture, and the stone representatives took oath to the now monarchical heir king.

Episode from the Battle of Køge Bay on July 1, 1677, where Admiral Niels Juel won the reputation by defeating the overpowering Swedish opponent. The image is a section of one of twelve large tapestries depicting the Scanian war, woven by the Dutchman Berent van der Eichen in the period 1784-1792. Christiansborg Castle.

Denmark’s finances were now completely ruined and the country depleted. In order to find a solution, in September 1660, a Standing Assembly in Copenhagen was called by nobles, clergy and citizens. With the support of citizens and clergy, the king then carried out a coup d’état which abolished the fortification of 1648 and made the crown hereditary in Frederick 3 ‘s family. By the so-called monarchy of sovereignty (the act of sovereignty) of 1661, the king gained unanimous power. The central administration was organized in colleges, and officials on fixed pay and without military authority replaced the former sheriffs. A new saddle saddle was created, mainly recruited by Germans and Danish citizens. In 1683 came Christian 5’s Danish Law and in 1684 the land.

Both Christian 5 and his successor Frederik 4 tried to regain the lands that were forfeited to Sweden, but nothing was achieved; neither with the Scanian war in 1675–1679 nor the participation in the Great Nordic War in 1709–1720.

The government pursued a distinctly mercantilist industrial policy to promote trade and industry. At the same time, attempts were made to safeguard the interests of the landlords, among other things, the introduction of the stave band in 1733 was to secure the landlords a cheap and stable labor. From 1660 until about 1750 it is evident that the peasant conditions were deteriorating.

During the seriously mentally ill Christian 7, the King’s lifelong Johann F. Struensee carried out a series of reforms in the spirit of the enlightened monarchy in the period 1770–1772. Most reforms, however, were repealed by Ove Høegh-Guldberg, who led the government until he was overthrown in 1784, and Crown Prince Frederik took over the reigns with Andreas P. Bernstorff as prime minister. A liberal period of reform was initiated, and under Christian D. Reventlow’s leadership a number of important land reforms were implemented, including the abolition of the stave band in 1788.

The Customs Ordinance of 1797 meant a liberalization of the mercantilist customs policy. The goal of foreign policy was to keep Denmark-Norway out of the major European conflicts. While other states were at war, it became possible to conduct extensive trade and shipping, which led to excellent times for the bourgeoisie in the cities, especially in Copenhagen.

By the mid-1700s, the Danish expansion of Greenland also began. Most of the Danish settlements were founded in the period 1734-1769. In 1776 the Royal Greenland Trade was established. Denmark also had colonies in India (Trankebar) and Danish West Indies (Saint Thomas, Saint John and Saint Croix), which during this period experienced a flourishing time. This was not least due to the slave trade, where the Danish fort Christiansborg on the Gold Coast (Ghana) was a support point.

The period 1770–1789 was a heyday for Denmark’s slave trade, which in reality developed into a Danish colonial empire in Africa. But the misgivings came, and in 1793 Denmark was the first country in the world to ban slave trading.