The History of Denmark Part II

The kingdom gathers – the Kalmar Union

The Kalmar Union, which united the Scandinavian countries, was established in 1397. The picture shows the Union letter, which contains rules for the procedure for future royal elections, the United States’ relations with abroad, and how peace should be ensured between the three kingdoms. However, the document appears unfinished and was probably never sent. The legal validity of the Union letter is disputed by researchers.

King Erik was elected king, although Margrete was acting regent until his death. The text that deals with the royal election reads: First, nw scule thisse thry kingdom, then king, who revered king Eric in his lifetime, and since evinnelicæ thisse thry kingdom and king hafue and more parents all thry king, so that rich ages at scias more for Gudh’s sake.

Valdemar Atterdag was elected king (1340–1375) after an agreement between Holsteinians, lübeckers and Danish great men. Over the course of 20 years, he succeeded in restoring the kingdom and sought to continue the conquest policy of the electorate in the Baltic Sea area. However, a union of Sweden, the Holstens, the Duke of Southern Jutland and the Hanseatic cities caused this policy to collapse in 1367–1368. Valdemar’s daughter Margrete (died 1412), who was married to the Norwegian king Håkon 6 Magnusson, again made Denmark a powerful kingdom. In 1376, the National Council elected her and Håkon’s son Olav (Danish: Oluf) to the Danish king with Margrete and, after all, Håkon, as the child king’s guardians. When Håkon 6 died in 1380, Denmark and Norway became united under one king, and after Olav’s death in 1387, Margrete became the reigning queen. In Denmark, however, she was just a queen in favor, not in name.

At the Kalmar Union in 1397, Sweden became united with Denmark and Norway with Margretes sister-in-law Erik of Pomerania as king. When he took over as real king after Margaret’s death in 1412, he continued her centralist union policy which supported Denmark as the main country and increasingly deployed Danish lords and bishops also in Norway and Sweden. A war against the Holstein counties of southern Jutland ended in defeat, and neither did the war against the Hanseatic cities end happily for him. As a counter to the power of the Hanseatic Empire, Erik was strongly interested in promoting the urban industries, and therefore gave the cities exclusive rights to trade and crafts. Around 1429 he introduced the Øresundtoll, which until the 19th century was to become an important source of income for the treasury.

Erik experienced rebellion in both Sweden (1434) and Norway (1436) against tax cuts and the consequences of centralized Union policy, and eventually came into conflict with both the Danish and Swedish national councils. In 1439 he was deposed as king, in 1442 also in Norway. Under Erik’s successor Christoffer of Bavaria (1439–1448), the national council had a much greater place in the government of the kingdom.

In 1448, the National Council elected Christian of Oldenburg as king, and from 1450 he was also recognized as Norwegian king. In the same year, Denmark and Norway signed a perpetual union agreement, the Bergen Treaty, which guaranteed the full independence of each kingdom under a common king (personal union). In Sweden, Christian king was only for shorter periods; a conquest attempt in 1471 ended with a crushing defeat at the Battle of Brunkeberg outside Stockholm. However, he became Duke of Schleswig and Count of Holstein and Stormarn in 1460 on the premise that Schleswig and Holstein should be bound together forever. In 1474, Holstein was also elevated to a duchy on par with Schleswig. Christian thus laid the foundation for the staff union between the Kingdom of Denmark and Schleswig-Holstein.

More rights to the citizenship 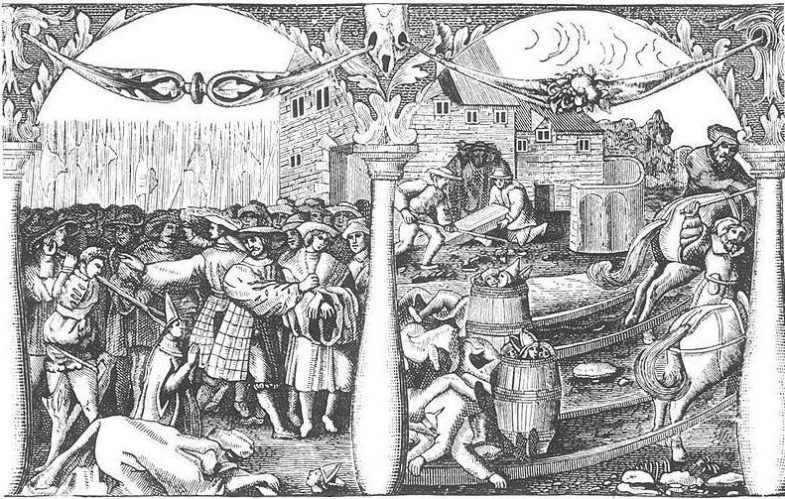 After the Stockholm massacre in 1520, the Swedes left the union. The picture shows parts of a reproduction of the woodcut Blodbadsplansjen or Blodbadbord, made by Kort Steinkamp and Hans Kruse in Antwerp on Gustav Vasa’s order in 1524. The picture was made as propaganda against Christian 2, in Sweden also called “Christian Tyrann”.

The bourgeoisie in Denmark, which in 1422 had all the exclusive rights to trade, became increasingly important. In 1468, the first town meeting was held where citizens also met, alongside nobility and clergy. But even during the reign of Christian 1, the nobility also managed to acquire ever-increasing collections of goods. By contrast, the peasants’ condition continued to deteriorate during the 1400s and 1500s, leading to several unsuccessful peasant revolts.

Christian’s son Hans led a citizen-friendly policy and strengthened the king’s power by deploying bailiffs of bourgeois origin. A conflict with the lübeck ended in the king’s favor. Under Hans, the foundation was laid for a war fleet. Hans’ son Christian 2 largely continued his politics, with the support of the bourgeoisie to increase king power. The cities gained exclusive rights to foreign trade, and he fought the Hanseatic forces, albeit by granting the Dutch privileges instead.

Christian 2 managed to conquer Sweden, but following the Stockholm massacre in November 1520, a strong Swedish resistance arose under Gustav Eriksson Vasa’s leadership. In Denmark, the dissatisfaction with the king was quite strong among the men. At the Viborg thing in March 1523 Frederik 1 (dead 1533) was hailed as a new king, and Christian fled to the Netherlands. The following year, the Norwegians also chose Frederik as king. When Christian 2 returned in 1531, he was taken prisoner.

The Reformation is introduced

Under “Count feud” in 1534-1536 traveled burghers and peasants, backed by Lubeck, against the nobility and høygeistligheten. Christian 3 was victorious in 1536 with Holstein and Swedish support. The same year the Reformation was introduced in Denmark. The Danish church became Lutheran state church, and the church and monastery property fell to the king. The reformation and confiscation of the church’s revenues led to a significant strengthening of the krone’s finances. The krone became the owner of about half of Denmark’s land. Throughout the 16th century, the krone was then able to largely comply with the goal of financing its operations through its ordinary revenues through various lens reforms. Only on rare occasions did one have to print extraordinary taxes. The increasing international tension in the 1600s led to growth in the state’s tasks, and especially the expenditure on the military system grew strongly. The krone thus became dependent on ever stronger taxation.

As major landlords, both the nobility and the crown from around the 1540s could benefit from the international, long-term rise in prices of goods such as grain and oxen. Price crises and wars of destruction in the 17th century greatly contributed to undermining the financial position of both the Crown and the nobility. At the time of the introduction of the monarchy in 1660, the noble economic and military power was broken. Only in the 18th century was there a lasting improvement in the Danish agricultural economy. The economic conditions for the landlords improved again. At the same time, the state could, to a certain extent, let the tax burden decrease.

After Christian 3 gained full control of Norway in the summer of 1537, the reformation was also introduced here. The Norwegian national council fell away, and Norway was formally a sound country under Denmark.