The History of Denmark Part I

Denmark’s true history begins only when the Viking age begins (around the year 800), and you get some written sources. Danish kings managed in the Viking Age to submit to both England and parts of today’s Norway and Sweden. During the Middle Ages, church and royal power was expanded. In 1397 Denmark joined the Kalmar Union together with Norway and Sweden, and Denmark became the dominant state in the union. The Swedes left the Union in the 1520s, while Norway (together with Iceland and the Faroe Islands ) continued to be associated with Denmark.

In the 17th and 17th centuries, Denmark fought a number of wars, primarily with Sweden, to which they lost large territories. In the late 1800s, Denmark also had to give up several areas to Germany. After the Napoleonic Wars, Denmark had to relinquish Norway to Sweden, while Iceland and the Faroe Islands remained in the Danish empire. Iceland became independent in 1944, the Faroe Islands became autonomous from 1948.

Denmark was occupied by Germany during World War II. After the war, Denmark has pursued a westward foreign policy, with membership in NATO and the EU, etc. 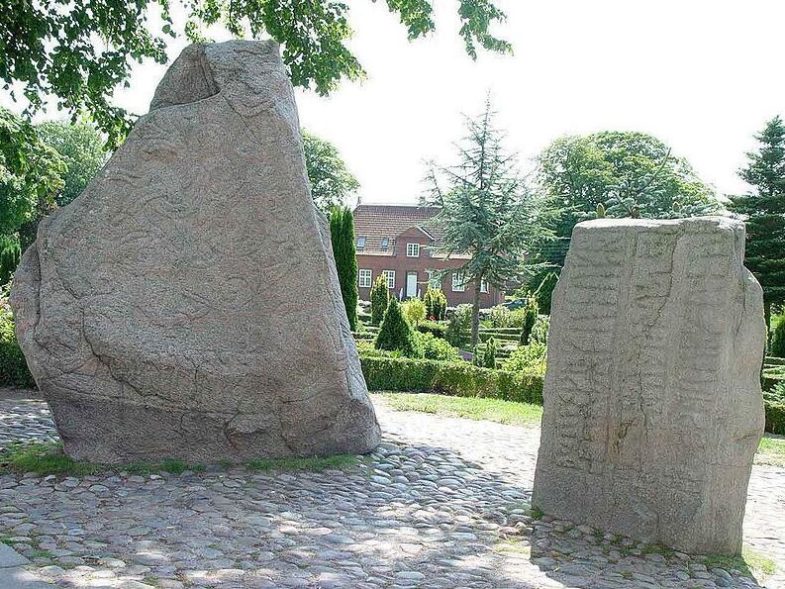 The little Jelling stone was erected by Gorm the Ancient and has the inscription: “King Gorm made this memorial after Tyra’s wife, the fine of Denmark.”

Harald Blåtann erected the largest of the Jelling stones in Jutland. The inscription reads: “Harald King commanded to make this memorial after Gorm’s father and Tyra’s mother – the Harald who got used to all of Denmark and Norway and made the Danes Christian.”

At about the same time with the Viking trains, the Danes supported France. In 808, Karl attacked the great Danish king Godfred, who, according to the Frankish national accounts, had built a defense facility from the Baltic to the North Sea, the oldest Danevirke. However, archaeological investigations have shown that this site must have begun all in the 730s. Other archaeological finds, along with scattered information in foreign written sources, suggest extensive political organization among the Danes, at least in Jutland, way back in the 700s.

After Godfred’s death, the settlement in 811 between twelve Danish and twelve Frankish great men came to the effect that Eider (the Ejderen) for the future should be the boundary between the two kingdoms. Under Godfred’s sons Hårek the old (death 854) and Hårek the younger (death 870), the Viking trains gained a large scope, which may be partly due to a certain overpopulation in cultivated areas.

However, the homeland was torn by internal strife, until Gorm the Old (dead before 950) succeeded in reassembling the land. The son Harald Blåtand expanded the empire, including parts of Holsten and Norway. Harald’s son Svend Tveskæg fortified the Danish dominion in southern Norway, and in 1013 succeeded in subjugating the whole of England. When he died in 1014, his son Knud became the great (Knut the mighty) king of England, and inherited Denmark after his brother Harald around the year 1018. In 1028 Knud was expelled Olav Haraldsson from Norway, and had supremacy here until 1035. Knud’s kingdom represented the greatest power of the Danube, a Viking empire primarily built on naval power and a solid staff of guardians around the king.

After Knud’s death in 1035, his son Harde-Knud tried to keep the kingdom together, but when he fell away in 1042, the English chose a king of his own old family. Denmark now came into association with Norway, with Olav Haraldsson’s son Magnus the good being elected Danish king. In 1043 Magnus succeeded in beating the wizards, who had begun to threaten the kingdom, in the battle of Lyrskog heath. When Magnus died in 1047, Svend Estridsson (1047–1074 or –1076) became king. 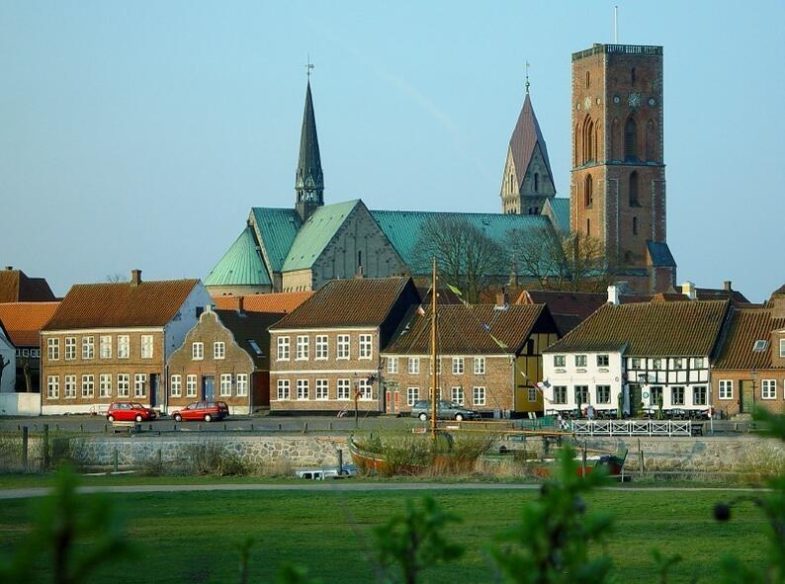 Ribe is Denmark’s oldest city, and the cathedral (central to the picture) was started in the early 1100s.

Svend led to 1064 wars against the Norwegian king Harald Hardråde. In the following peace period, Svend succeeded in increasing and consolidating the royal power. This happened in close cooperation with the church, which in turn received the king’s support to develop and establish his own organization. Svend’s son Erik Ejegod’s agreement with the Pope to establish a separate archdiocese’s seat in Lund would mean greater independence for the Danish church. Lund was the archdiocese of the whole of the Nordic countries, and was founded in 1104. The church had everything under Knud obtained his own judgment and that the bishops got rank with dukes and earls. Around 1100, the church’s economic power was greatly enhanced by the introduction of the tithe.

After some bloody civil wars, Valdemar became the great monarch in 1157. Valdemar’s goal was to make Denmark the leading Baltic sea power. In particular, it was Archbishop Absalon (dead 1201) who, under Valdemar’s son Knud, stood as the exponent of this conquest policy. The position Absalon had created for Denmark was further developed by the future generation. During Valdemar 2 (later called Valdemar Victory), the Danish king’s power went south to Elbe and east to Oder and Wisła, and from 1210 also Estonia.

But the Danish empire in these areas could not be maintained, which was due both to the lack of Danish settlement and the resistance of North German princes. However, an internal economic expansion made Denmark a relatively rich country. New land was laid under the plow, and the large herring fishery at the Sound, especially at Skanør (the Skåne market), brought riches to both the townspeople and the king.

In the Valdemartids a nobility of royal officials arose, who, against war service, gained certain privileges. The church also strengthened its power during this time and thus became tax free, got its own court and chose its own bishops. Many monasteries and stone churches were erected. The state government created a permanent administration, and the country’s old rules of law were codified in the landscaping laws, best known is Jutland law from 1241. But unlike Norway and Sweden, Denmark never got any national law for the entire kingdom in the Middle Ages. First with Christian 5’s Danish law of 1685, the landscape laws were replaced by such a common set of laws.

The centenary after Valdemar 2’s death in 1241 became a time of disaster, with wars within the royal family and conflicts between king, church and great men, alongside a total collapse of state finances. This was especially evident under Erik Menved (1286–1319). He wanted to resume the Baltic Sea politicians’ policies in an attempt to gain influence in Northern Germany and Sweden, but could only obtain money and loans on the condition that creditors (Holstein counties) were allowed to leave parts of the kingdom as collateral. When Erik died, the state was in fact bankrupt, and there was conflict with the church and many nobles.