A large shortage of work means that at least one million Tajiks work abroad, at most perhaps 1.5 million. This is about half the country’s workforce. Most people go to Russia, but many also apply to Kazakhstan.

The figure for foreign workers is uncertain as many work illegally and move back and forth across borders. It is mainly men who give up.

Almost half of those who stay at home are estimated to work in the informal sector of the economy. Unemployment is high and underemployment is widespread. Those who are employed often have such low wages that they still have to grow their own food or raise income.

Among the formal employees, around 60 percent are found in agriculture, 30 percent in the service sector and others in manufacturing, construction, mining and more. 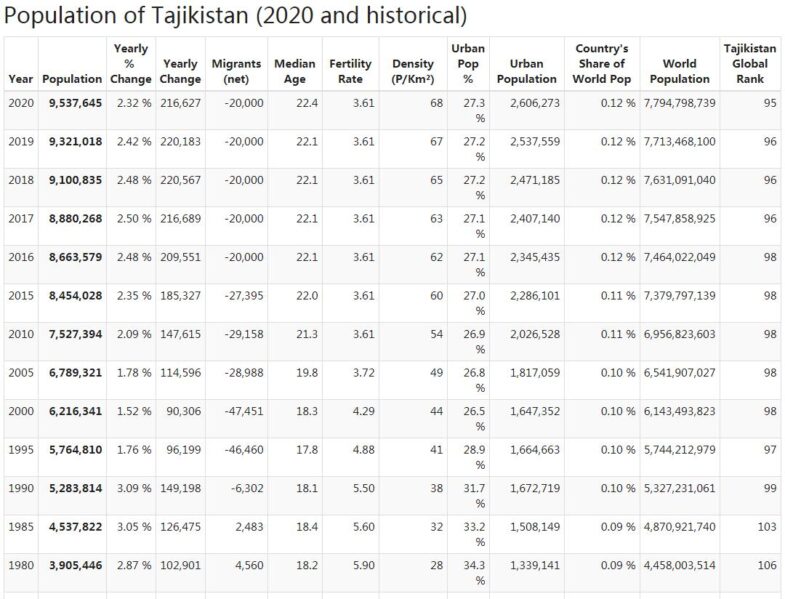 The right to organize a union is statutory and nine out of ten workers are members of any trade union. However, the unions are subordinate to the authorities. There is no independent trade union movement in the country. Salary is low. The poorest families receive government grants to support themselves.

IS takes on attack against border posting

Seventeen people are killed when about 20 armed and masked men attack a border post near Uzbekistan, near Dushanbe. Police kill 15 of the perpetrators and arrest five. A police officer and a soldier are also killed in the attack. According to the police, the attackers belong to IS and must have walked from Afghanistan 20 miles inside Uzbekistan and then crossed the border. The attack happens on the same day as Tajikistan would have celebrated Constitution Day. President Rahmon is currently in Switzerland. Later IS takes on the deed.

Many IS members are killed in prison riots

At least 32 people are killed in connection with a prison riot in a high-security prison less than two miles outside Dushanbe, the Ministry of Justice reports. Among the dead are 19 members of the IS, five members of a banned domestic resistance group and three prison guards. Other victims are convicted of violence or drug offenses. Five prisoners and the three guards are killed by the revolting prisoners, while the others lose their lives during clashes with security forces that have come to the scene to restore calm. According to the authorities, more than 1,000 Tajik citizens have joined IS in Iraq and Syria in recent years.

The policeman is sentenced to prison for torture

A policeman is sentenced to 13 years in prison for, among other things, torturing a prisoner who, against his denial, was found guilty of membership in a banned Islamic organization. The man was arrested in 2017 along with about 10 other people but was later released after bribing staff in prison, according to his own statement. The man was arrested again and must then have committed suicide in prison. Human rights organizations regularly report that torture occurs in Tajik detention centers and prisons, but rarely are the authorities themselves reporting such cases.