The right to join trade unions is statutory, as is the right to strike, although some professional groups are exempted from the latter, including teachers, as well as employees in the state and the defense.

Unemployment is low compared to many other countries. However, unemployment among recent graduates has remained a problem, while some industries find it difficult to recruit highly trained staff. Scientists and engineers, among others, applied to China attracted by high salaries. In Taiwan, wage growth has been steady in recent years due to the manufacturing industry moving production abroad and to weak growth.

There are over five thousand trade unions and about ten national trade unions. The industrial structure of small family-owned companies does not favor trade union activities, which contributes to the unions being weak. 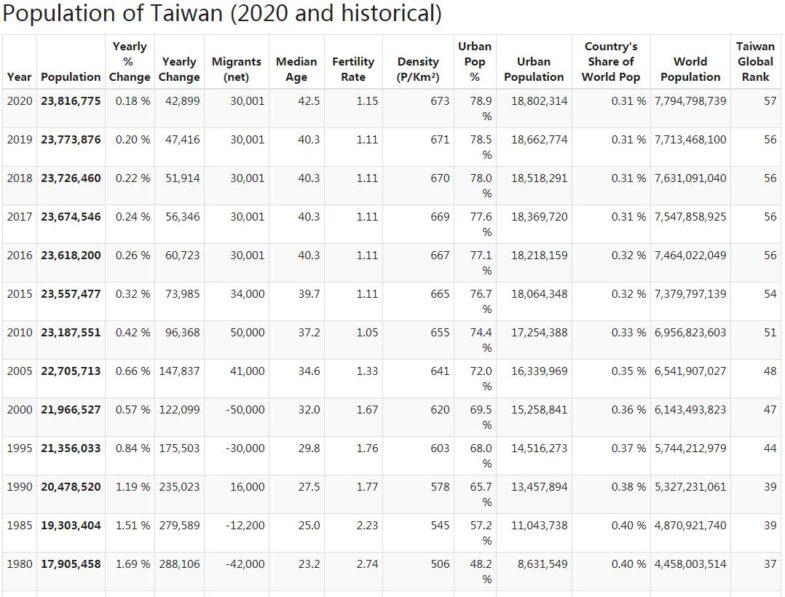 Several opinion polls show a leadership of President Tsai Ing-wen over KMT candidate Han Kuo-yu. According to a survey by TV channel TVBS News at the end of September, Tsai supported 50 percent of residents while Han was 38 percent. Support for Tsai has increased compared to previous measurements, which assessors believe is due to the ongoing protests in Hong Kong. An important message for Tsai is to defend Taiwan’s sovereignty towards China, and the reporting and support of Hong Kong democracy activists in their struggle has also benefited Tsai.

Han Kuo-yu, mayor of the southern city of Kaohsiung, wins the primary election to become Nationalist Party candidate in the 2020 presidential election. Kuo-yu gets 45 percent of the vote, compared to 28 percent for Terry Gou, Taiwan’s richest man. Kuo-yu is described as a populist, and he promises to boost the Taiwanese economy and improve contacts with Beijing.

The legislative yuan in Taiwan agrees to a law that gives people of the same gender the right to enter into a legally recognized couple relationship and to apply for marriage registration with the authorities. Taiwan’s parliament is the first in Asia to approve same-sex marriage. In a 2017 ruling, the Constitutional Court ruled that same-sex couples have the right to marry, and Parliament was given two years to amend the current legislation. However, in referendums held thereafter, a majority of Taiwanese have considered that recognized marriage under civil law should only be possible between a man and a woman (see November 2018). The government decided to resolve the issue by proposing the introduction of a special law permitting same-sex marriage.

Tsai is running for re-election

President Tsai Ing-wen announces that she will run in the 2020 presidential election, despite her support among voters for some time.

New drones for monitoring in operation

Taiwan’s fleet showcases new drones to assist with surveillance in the Taiwan Strait between China and Taiwan. The new drones should be able to operate for more than 12 hours in a row. The drones are manufactured in Taiwan unlike other military equipment as well as US F-16 fighter planes and French Mirage planes.

President Tsai Ing-wen appoints Su Tseng-chang as new prime minister after Lai Ching-te filed his resignation application along with several other members of the government. Su Tseng-chang was the head of government in 2006-2007. Su announced after the local elections in November that he intended to take his share of the responsibility for DPP’s election defeat and resign.

Over four-fifths of Taiwanese oppose reunification with China under the “one country, two systems” principle. It shows an opinion poll by the Cross-Strait Policy Association after China’s President Xi Jinping recently advocated for this solution in a speech (see January 2). This would mean that Taiwan, like Hong Kong, would become part of China but with some autonomy and its own political system. Even the groups that support the opposition, the “blue” group with Kuomintang as the largest party, are opposed to this solution. The opinion poll also shows strong support for Tsa Ing-wen’s demands vis-à-vis China: that Beijing must recognize Taiwan (Republic of China), respect the Taiwanese respect for democracy and freedom, that relations should be managed in a peaceful and equitable manner, and that Negotiations must be conducted by the government of Taiwan or an institution that has been given this assignment by the government.

The ruling Democratic Progressive Party elects Cho Jung-tai as the new chairman. President Tsai Ing-wen chose to resign as party chairman following the DPP’s defeat in the local elections in autumn 2018 (see November 2018). Cho Jung-tai wins over a more radical DPP politician who advocates for Taiwan to pursue a clear independence policy in relation to China.

The Supreme Court overturns a previous verdict against President Ma Ying-jeou and orders a new trial to be held. Ma Ying-jeou was sentenced in May 2018 to four months in prison for violating the Security and Surveillance Act by leaking information about an ongoing criminal investigation. Ma appealed the verdict.

President of China: Taiwan will reunite with China

Chinese President Xi Jinping said in a speech commemorating Beijing’s first approach to Taiwan in 1979 to improve relations that it is “inevitable” that Taiwan will reunite with the Chinese mainland. Xi says Beijing does not make “promises to give up the use of military force and reserves the right to use” all necessary means “to achieve the goal of reunification. Taiwan is to be included in China in accordance with the “one country, two systems” principle. President Tsai responds a few days later to the statement by appealing to the outside world for support for Taiwan’s sovereignty. She also criticizes China’s leadership for undermining democracy in Taiwan by not wanting to engage in talks with the Taiwanese government.