The labor market has long been stable and characterized by labor peace; strikes are unusual. The trade unions have a comparatively weak role. Only one in six employees are unionized and almost half are covered by collective agreements.

After a period of strikes and unrest, the social partners in 1937 signed an agreement on peaceful negotiations, and this remains largely true. Salary negotiations are largely handled directly between employers and employees.

The proportion of employed people is high. However, nearly half of the women who work do so part-time. One contributing factor is the poorly developed childcare. The working hours are long compared to other western countries and the absence is low.

Open unemployment is also relatively low. For a long time there was no unemployment at all. During the recession, migrant workers were primarily affected, they simply had to leave. Since the late 1990s, unemployment has fluctuated between 2 and 5 percent. 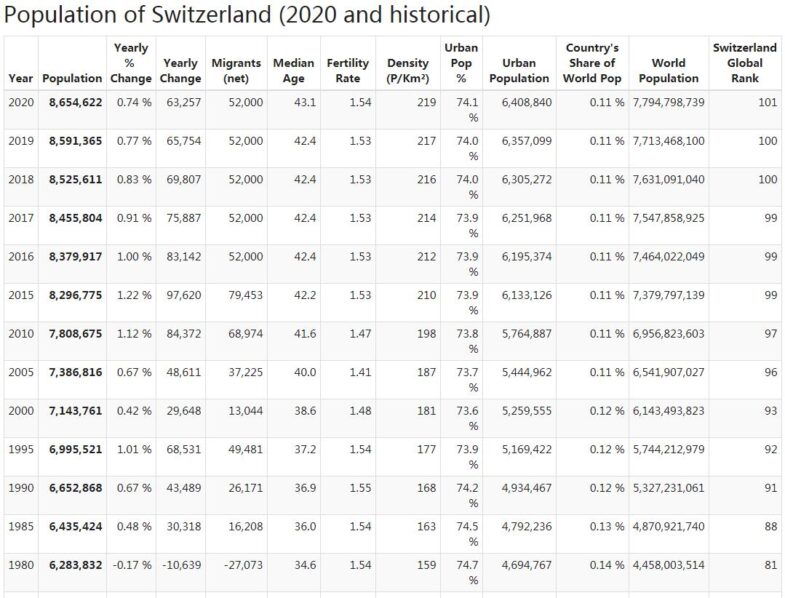 Switzerland also managed to escape extensive unemployment during the global financial crisis that erupted in 2008, but many employees also agreed to reduce their working hours as order intake declined.

A significant part of the workforce is foreign nationals. They act as a kind of buffer in the labor market, which limits the costs of open unemployment and active labor market policy. According to the union, there is extensive abuse of foreign labor.

The largest trade union central organizations are the SGB / USS and Travail Suisse, which were formed through a merger in 2002.

After Samuel Schmid resigned, following a scandal in defense but also with reference to scanty health, the Federal Assembly elects SVP’s Ueli Maurer as Minister of Defense. Thus, SVP is once again given a seat in the government from the turn of the year.

A serious conflict has arisen with Libya since a son of the country’s leader Muammar Gaddafi and his wife in July was arrested on suspicion of mistreatment by his own service staff at a hotel in Switzerland. The complaint against Hannibal Gaddafi and her husband is now withdrawn, after the suspected abuse victims have been compensated. But Libya has responded by taking back assets from Switzerland, stripping oil supplies and arresting two Swiss citizens.

A new party is formed

The division within SVP leads to the formation of a new party in several cantons: the bourgeois Democratic Party (BDP). Through Widmer-Schlumpf and Schmid, the new party has two of seven seats in the government.

The party leadership initiates a process to exclude Widmer-Schlumpf and Schmid from the party (see December 2007).

When the Federal Assembly appoints the government, SVP’s Christoph Blocher is not re-elected. His post as Minister of Justice goes instead to Eveline Widmer-Schlumpf who is seen as a less contentious person in SVP. The party’s second ministerial post goes to Samuel Schmid, who has been in the government since 2001. They both say yes, but the SVP in protest withdraws its support for the government.

SVP ahead in the parliamentary elections

SVP strengthens its position as the largest party. The vote share of 29 percent is record high for Switzerland and gives 7 new mandates in the National Council and 1 in the Standing Council. Two will be the Social Democratic Party (SP), with about 20 percent of the vote.

Left-wing extremists are trying to stop supporters of the right-wing populist Swiss People’s Party (SVP) from gathering for a meeting before the election. The electoral movement has been characterized by unusually upset moods. One of SVP’s election posters has raised allegations of racism. The poster shows three white sheep kicking out a fourth, black sheep from a Swiss flag.