Most of the Swazis who have a formal employment are in public service. However, the vast majority of people are active outside the formal economy, especially with cultivation for housing needs or street trade of various kinds.

A large majority of the population support themselves through agriculture in some form. Maybe they work as farm workers on plantations, with food processing in light industry or as self-sufficient farmers on a small piece of land owned by the king.

Unemployment and underemployment are high. Official statistics are missing, but a figure that is often mentioned is 40 percent unemployment. The textile industry and the public sector have suffered staff cuts since the turn of the millennium.

Some Swazi men work in South African mines, but this group has declined significantly since the beginning of the 2000s due to reduced demand for guest workers in neighboring countries. In contrast, the number of highly educated Swazis working abroad (mainly South Africa and the United Kingdom) has increased.

The private employers are mainly found in industry and plantations. 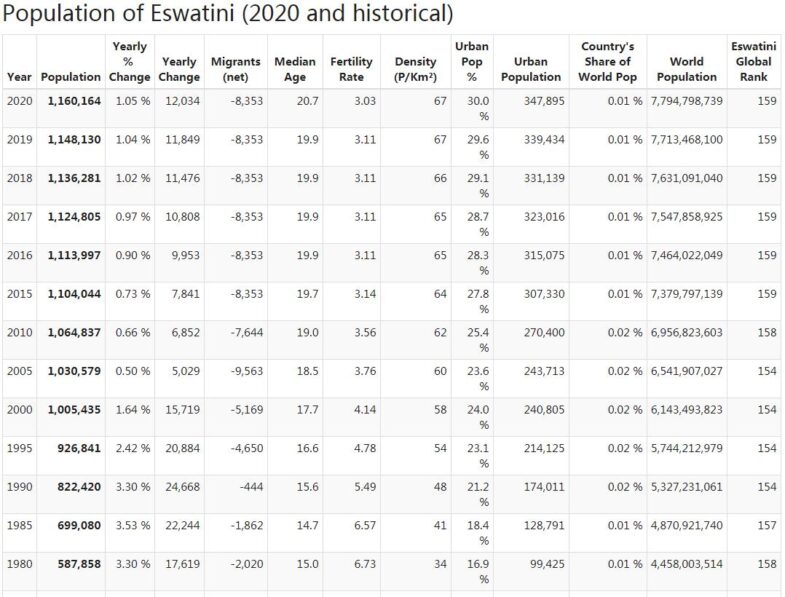 Trade unions are allowed and collective bargaining on working conditions is common. However, harassment of trade union activists occurs – from both authorities and employers. Nevertheless, the trade union movement is relatively strong and has played an important political role, since in practice political parties are prohibited. Eight out of ten with formal employment are unionized.

The largest trade union central organization is Tucuswa (Trade Union Congress of Swaziland), which has close links with the South African national organization Cosatu. Tucuswa was formed in 2011 through a merger of SFTU (Swaziland Federation of Trade Unions) and SFL (swaziland Federation of Labor). Later also the National Teachers’ Union in Tucuswa.

Persons with formal employment are entitled to pension and sickness benefits, but the levels of compensation are low.

Forced labor is prohibited by the Constitution, but still exists in agriculture. By tradition, the king or chieftains may require rural residents to work as laborers.

After a long series of rapes in the country, the police prohibit overly challenging attire and threaten to arrest women in, for example, mini skirts and too revealing tops.

The Archbishop of the Anglican Church Meshack Mabuza calls on King Mswati III to step down and prepare for a democratic government. The Anglican Church in Southern Africa consecrates its first female bishop, Ellinah Wamukoya, who becomes bishop of Swaziland.

Swaziland appeals to the International Monetary Fund (IMF) with a loan application, but the loan body demands that Swaziland first raise taxes, lower the salaries of government employees and more. The government then appeals to South Africa for a loan. The loan is granted to resolve Swaziland’s emergency crisis, but South Africa demands economic and political reform in the neighboring country, which causes Swaziland to refuse.

Acute lack of money in the Treasury is causing popular dissatisfaction. The crisis is caused, among other things, by sharply declining revenues from the Sacu regional customs union and by high costs for the royal family’s living. The budget deficit is measured at just over 14 percent of gross domestic product (GDP) – comparable to the deficit in debt-ridden Greece. The foreign exchange reserve for the 17th consecutive month will fall to $ 523 million, which is enough to pay for two weeks of imports.

Demonstrations against the regime

On April 12, regime critics around the country demonstrate. They are met by riot police who use rubber bullets, tear gas and water cannons to quell the demonstrations.

King Mswati III charters a private flight to London, where he is a guest of Prince Williams and Kate’s royal wedding. The choice of a precious jet as a means of transport is facing sharp criticism from the opposition.

Swaziland’s poor economy is deteriorating further and the country is in a financial crisis with heavy deficits in the Treasury. The government warns that it may lower the salaries of public servants.