A quarter of the people who have a formal employment work in agriculture and fisheries. Almost one in three employees are found in industry, construction and mining. Others work in the service sector, which includes tourism and state administration.

Many jobs are in the so-called economic free zones. There, foreign companies run textile industries, which provide jobs not least for women. Working conditions in the free zones are described as tough and wages are low. Trade unions are allowed there, but union activists are harassed by the employers.

Those who do not have a formal employment try to support themselves for farming for self-catering or move forward with the help of small jobs of various kinds, such as street sales or the collection of firewood.

Formally registered unemployment in the early 1990s was almost 16 percent, but has since dropped sharply. However, the statistics only include those who are actively looking for a job. The hidden unemployment and underemployment are expected to be considerably higher.

The high youth unemployment is a major problem. The government is trying to take various labor market measures to reduce the risk of social unrest that high unemployment rates among educated youth often pose. A state unemployment insurance has been in place since 1977. 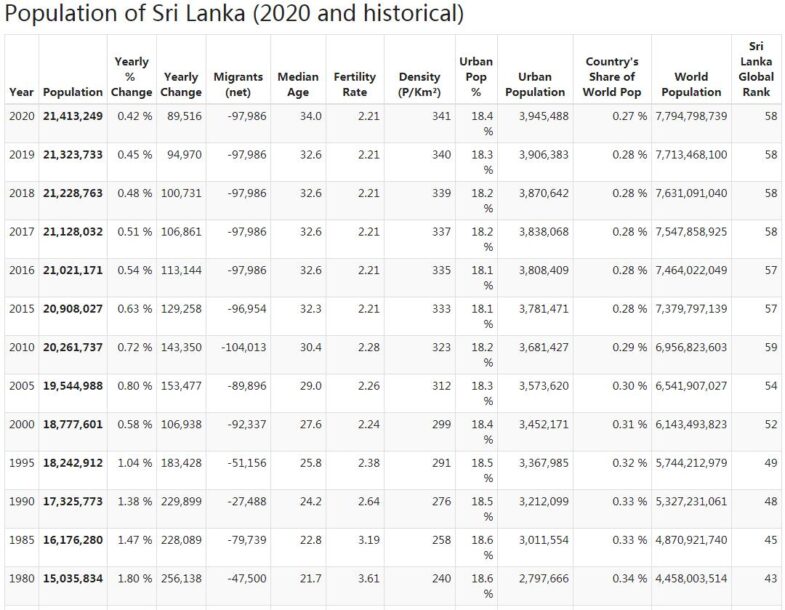 About one in five formally employed lankes are members of one of the country’s approximately 2,000 trade unions. Despite their mutual divisions, the unions are strong and have played a historically important role, not least on the plantations. The right to strike applies to all except civil servants. The president has the right to illegally declare strikes in industry.

Children under 14 are not allowed to work by law, and the penalties for those who violate the law have been increased, but many children are still forced to work. Agriculture is the sector that employs most child laborers, but children are also found in mines, construction and manufacturing. Many girls serve as maids, and it is common for them to be treated poorly.

About 1.7 million people work abroad. Many are women who support themselves as maids in the Middle East, among others. The money that foreign workers send home is one of the country’s largest sources of foreign currency.

Loans from the World Bank

Sri Lanka may borrow $ 1.34 billion from the World Bank. The money will be paid out over a three-year period and will help to get the country’s economy on its feet.

IMF: “The economy is stabilizing”

In a first evaluation of the Sri Lankan economy after the loan in June 2016, the International Monetary Fund (IMF) says that the fund is mainly satisfied with how the country handles the situation. Inflation has fallen somewhat and the balance of payments has improved. However, the IMF warns that the country has too little foreign currency reserve.

“Sri Lanka to be demilitarized”

The Government of Sri Lanka announces that the country will be completely demilitarized by 2018. This means that the military’s involvement in civil society will definitely cease after decades of wartime.

Support package from the IMF

The International Monetary Fund (IMF) grants Sri Lanka a $ 1.5 billion loan over a three-year period. The support loan is a consequence of the country being in an acute payment crisis with a lack of liquid funds in the Treasury.

Offices for missing persons are opened

An office for missing persons is opened to investigate the fate of more than 20,000 people, who disappeared during the civil war of 1983–2009. The office should encourage relatives to sue the guilty and apply for damages.

Half a million on the run from floods

In the middle of the month, Sri Lanka is affected by a persistent monsoon rain for more than a week, causing floods and heavy landslides around the country. More than 100 people are killed and around half a million are forced to flee when their houses are destroyed by water masses and mud.

Prime Minister Wickremesinghe meets with his Chinese counterpart in Beijing and tries to renegotiate some loans. Sri Lanka has around $ 8 billion in loans from China and is facing a growing debt crisis. The Rajapaksa government became dependent on Chinese support, something that Sirisena is now trying to get out of. The government has applied for new loans from the International Monetary Fund (IMF) to get out of the debt crisis.

The work begins with writing a new constitution

A constitutional assembly, led by Prime Minister Wickremesinghe, begins its work on writing a new constitution. The aim of the process is for the country to have a constitution that strengthens both the self-determination of the Tamils ​​and the democratic institutions in the country.

Fonseka takes a seat in the government

Former Secretary of Defense Sarath Fonseka, who greatly contributed to the Rajapaksa government’s victory over the LTTE in May 2009 but who subsequently became bitterly hostile with the president, is taking office in the Sirisena government. He becomes Minister responsible for regional development. The appointment represents another step towards full restoration for Fonseka, who was humiliated by Rajapaksa by being deprived of his general degree and thrown in prison for high treason.

The economic problems are growing

Sri Lanka is threatened by a major debt crisis, not least to China, which has provided large loans to the country for infrastructure expansion. President Sirisena is trying to push forward the plans for a major Chinese port project in the capital and is being sued by the Chinese construction company.

Rajapaksa’s son is being prosecuted for money laundering

President Sirisena promises that up to 100,000 internally displaced people who have been forced to live in camps since the end of the war in 2009 will receive land from the state within six months. This applies to homeless war victims in the north and northeast, but also in the northwest.