After independence in 1991, unemployment rose in Slovenia and after a couple of years reached a record level of just over 15 percent. The employment rate then fell steadily until the financial crisis hit and the curve reversed again, to a new peak of just over 10 per cent in 2013. Since then it has dropped again.

The service sector now employs two-thirds of all working people, while the rest mainly work in the industry.

The austerity measures implemented during the financial difficulties that culminated in 2012-2013 included, among other things, reduced wages, reduced holiday allowance and fewer paid vacation days in the public sector. The unemployment benefit was also reduced and the annual working hours increased.

Many Slovenians commute daily to workplaces in Italy and Austria, where wages are significantly higher. The proportion of women in the labor market is high. 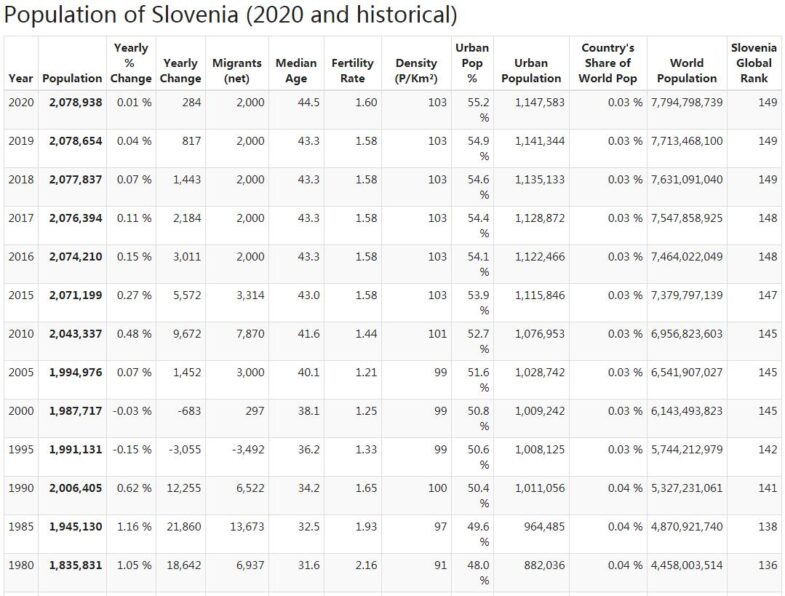 Trade unions can operate freely in Slovenia. About half of all working people are unionized. The largest national organization ZSSS has around 300,000 members and holds the four seats that are dedicated to the trade union movement in Parliament’s first chamber, the National Council. The trade union movement has long held a relatively strong position, among other things through the opportunity to mobilize people and get referendums. Opportunities for influence have decreased as constitutional changes in 2013 (see also Political system).

Near confrontation in Piran Bay

Slovenian police boats patrol the Gulf of Piran, and thus act in accordance with the arbitration dispute with Croatia, which would come into force the day before (see June 2017). According to the judgment, Slovenia considers itself entitled to reject Croatian fishing boats – but they are protected by Croatian police boats. The Slovenes threaten to fine the Croats, but they do not consider the arbitration to be legitimate.

In a poll conducted by the Delo newspaper, the center-left party gets Marjan Šarec’s list (List Marjana Šarca, LMS), which so far is only available at local level, 15.7 percent of the vote. The Social Democrats are second with 12.6 percent and the largest opposition party, the Slovenian Democratic Party, third with 12.2 percent. Prime Minister Miro Cerar’s ruling party comes in sixth place with 5.5 percent. Šarec, a former comedian and now mayor of the city of Kamnik, was barely defeated in the second round of the presidential elections in November 2017 by incumbent President Borut Pahor. Parliamentary elections are expected until summer 2018.

Parliament adopts the budget for 2018 and 2019. As economic growth is so good that the state can expect a large budget surplus, Finance Minister Mateja Vraničar Erman explains that many austerity measures for low-paid, children and pensioners, among others, can be ended. The largest investments are expected to go to transport and infrastructure, IT, healthcare and entrepreneurship.

With 53 percent of the vote, incumbent President Borut Pahor wins the second round of the presidential election over the mayor of Kamnik Marjan Šarec, and is thus allowed to remain in his post. However, turnout is low: just over 40 percent.

The presidential election gets a second round of elections

As none of the candidates in the presidential election on October 22 receives more than half of the vote, there will be a second round of voting on November 12 between the two with the most votes: incumbent President Borut Pahor (47.08%) and Marjan Šarec, mayor of Kamnik (24, 95%). Voter turnout was the lowest ever (43.47%).

Yes in the referendum on railway investment

Voters give the go-ahead to a law passed in May, which means that a second railway track will be built from Divača to Koper, Slovenia’s only commercial port. Opponents of the plans are critical to the financing of the project and have received the referendum. Among the parties that have supported the down side are the Slovenian Democratic Party, New Slovenia and the United Left. Of the three government parties, one, Desus, has remained neutral. Just over 53 percent of voters who participate vote for the project. The turnout is 20.5 per cent, just above the limit for what is required for this result to be valid (see Political system).

The day after the Prime Ministers of Slovenia and Croatia, Miro Cerar and Andrej Plenković, agreed to meet in Zagreb on September 28 (see below), Cerar declares that he does not intend to go to the meeting. This happens after Plenković, in his speech before the UN General Assembly, condemned the statement that the Permanent Arbitration Court in The Hague has included in the border dispute between the two countries (see June 29) as partial.

Prime Ministers of Slovenia and Croatia, Miro Cerar and Andrej Plenković, decide in conjunction with the UN General Assembly session in New York, where they both participate, to meet for discussions in Zagreb on September 27. At the top of the agenda is the delicate border issue (see also June 29, 2017).

The National Election Commission announces that MPs, political parties and ordinary voters can submit proposals for candidates for the presidential election on October 22, 2017 from August 21 through September 27.

The Ministry of Agriculture notes that the drought during June-August is the worst since 2003 and is so severe that it can be classified as a natural disaster. The worst affected are parts of south-eastern Slovenia where maize and wine crops have been destroyed but also meadows where the animals graze.

The Permanent Arbitration Tribunal (PCA) in The Hague comes with its opinion in the protracted dispute over how the sea border should be drawn in the Piran Gulf between Slovenia and Croatia (see Foreign Policy and Defense). The statement largely gives Slovenia the right. However, Croatia has understood that it will not accept the court’s ruling because Slovenian judges have previously shown contact with a representative of the Government of Slovenia. Instead, Croatia wants to continue to negotiate on its own with Slovenia. The EU has called on both parties to accept the ruling.

The medical profession decides to postpone announced combat measures for another six months. This happens since the union and the government have agreed on a review of salary levels and working conditions for the medical profession. See also November 22, 2016.

Preliminary figures from Slovenia’s Statistics Office show that GDP increased by 2.5 percent in 2016. The European Commission has recently upgraded expectations of economic growth in Slovenia to 3 percent for both 2017 and 2018.

Greater confidence in Russia than NATO

Slovenia is one of four NATO countries whose inhabitants would rather turn to Russia than to NATO for help if the country was attacked. A poll conducted in 66 NATO countries shows that residents of Slovenia, Bulgaria, Greece and Turkey rely more on Russia, while all other respondents believe more in NATO. The WIN / Gallup survey was conducted October – December 2016.

Parliament adopts a law that gives police the right to close the border with Croatia for asylum seekers if the number of migrants along the so-called Balkan route suddenly increases again and “threatens public order and domestic security”. Slovenia thus follows in the footsteps of Austria and Hungary.