The constitution guarantees citizens the right to work. Most jobs are in the service industry and manufacturing industry. The service sector employs just over 60 percent of all employees and the industry 25 percent. The constitution guarantees citizens the right to work. Nevertheless, and despite the country’s high economic growth, unemployment is relatively high compared to the rest of the EU. Unemployment varies between different parts of the country. In some areas of eastern Slovakia, about one in three residents go without a job, while it is significantly lower in the capital Bratislava. Of the long-term unemployed, half are Roma, even though they make up less than a tenth of the population.

Despite the fact that Slovakia has experienced considerable economic growth since independence in 1993, the official unemployment rate is relatively high compared to other EU countries, and highest among young people aged 15-24. Unemployment varies between different parts of the country. In some areas of eastern Slovakia, about one in three residents go without a job, while it is significantly lower in the capital Bratislava.

Among the Roma, unemployment is higher than the rest of the population. In some areas, almost nine out of ten people go without a job. One level of education is one of the reasons. There are also reports of discrimination against Roma in the labor market. Employers are said to be more likely to call people with non-Roma names to interview, than people with Roma.

The law gives unions full trade union rights, for example to negotiate collectively and strike. Civil servants employed in community service; however, judges, prosecutors and military do not have the right to strike. It is prohibited to dismiss employees who strike, unless the strike is illegal or unofficial. 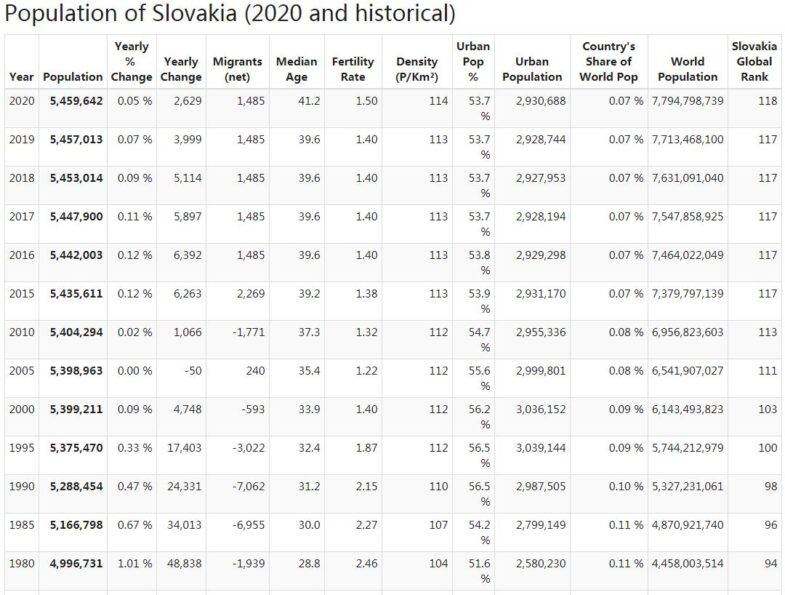 The trade union federation KOZ (Konfederácia odborových zväzov Slovenskej republiky) has lost many members since independence in 1993. Against the will of the unions, in 2003, a new labor market legislation was introduced that made it easier to hire and dismiss staff. In response to the 2006 elections, KOZ initiated a collaboration with the then opposition Social Democratic Party Smer-SD, which continued even around the 2010 and 2012. Elections KOZ members are encouraged to vote for Smer-SD. In 2011, KOZ had approximately 400,000 members.

President Kiska announces a referendum on maintaining or abolishing the ban on same-sex marriage. At the same time, residents should be asked about their views on gay rights to adopt and the school’s sexual education. Of the seven referendums conducted in Slovakia since 1993, all but one have been annulled as fewer than 50 percent participated.

After a time of popular demonstrations around the country against suspected corruption within the Social Democratic government, the party-free President Andrei Kiska is behind the protests. The protests concern partly that the Ministry of Health has purchased hospital equipment at an unreasonably high price, and partly loopholes in the rules for public procurement. The hospital scandal has already forced both the Minister of Health and the Speaker of Parliament to resign.

The editorial staff of SME, one of the country’s largest newspapers, resigns in protest that the German owner has sold 50 percent of the shares to the Czech-Slovak financial company Penta. Penta was unveiled in 2011 for involvement in a bribery business with politicians in the government (see Current policy).

Gas importer SPP says that gas deliveries from Russia have been halved. The decline occurs shortly after Slovakia began to export Russian gas to Ukraine. Russian producer Gazprom denies that a reduction would have occurred.

Deliveries of natural gas from Russia are reduced by about ten percent without explanation. Prime Minister Fico appoints an inquiry into whether the reduction has a technical explanation or whether it is a political measure from the Russian side.

The government presents a new economic program with large social initiatives. Prime Minister Fico says residents must experience that their lives are improving. The program includes, among other things, increased minimum wages and pensions and lower taxes for low-income earners.

Andrej Kiska will take office on June 15. He is Slovakia’s first head of state without a communist past.

In an addition to the Constitution, Parliament defines marriage as “union between man and woman”. Same-sex marriage is thus declared invalid.

The interest in the European Parliament elections is low. Only 13 percent of eligible voters participate. The largest will be the ruling Smer SD with just over 24 percent of the votes. The Christian Democratic Movement gets 13 percent. Most other parties end up at around 6-7 percent.

Wide support for Kiska in a crucial election round

In the decisive round, Andrej Kiska, surprisingly, gets close to 60 percent of the vote. Behind the broad support there was a concern about social democratic dominance at all levels in Slovak politics as well as dissatisfaction with continued high unemployment and a number of scandal scandals. Kiska had advocated for balance between the presidential office and the government and advocated stronger independence for the judiciary.

Fico wins the first round of elections

In the first round of the presidential election, Prime Minister Robert Fico gets the most votes, 28 percent. In a decisive round, he meets the partyless businessman and newcomer Andrej Kiska. Kiska gets 24 percent of the vote. The turnout is 43.4 percent.