There are a number of laws that provide good protection for employees, but they are not always complied with. Some groups, such as women and Roma, are often discriminated against. Unemployment is high.

Unemployment has been double-digit for decades. In connection with the euro crisis in 2012, it approached 25 percent when many companies and authorities were forced, or taken advantage of, to dismiss employees.

Before the corona crisis struck in the spring of 2020, unemployment had remained steady at about 13.5 percent for a few years. Among young people, three were unemployed.

Around one fifth of the labor force is estimated to be employed in the informal sector, largely in agriculture but also in the service sector.

The trade union movement has played a major role in the development of society in Serbia. For example, in 1991, the independent national organization Nezavistnost formed an important part of the opposition to Slobodan Milošević (see Modern history). The state-controlled trade union movement SSS-Serbia lost its privileges after the fall of Milošević in 2000. Today it has been reformed and renamed Catus (Confederation of Autonomous Trade Unions of Serbia). 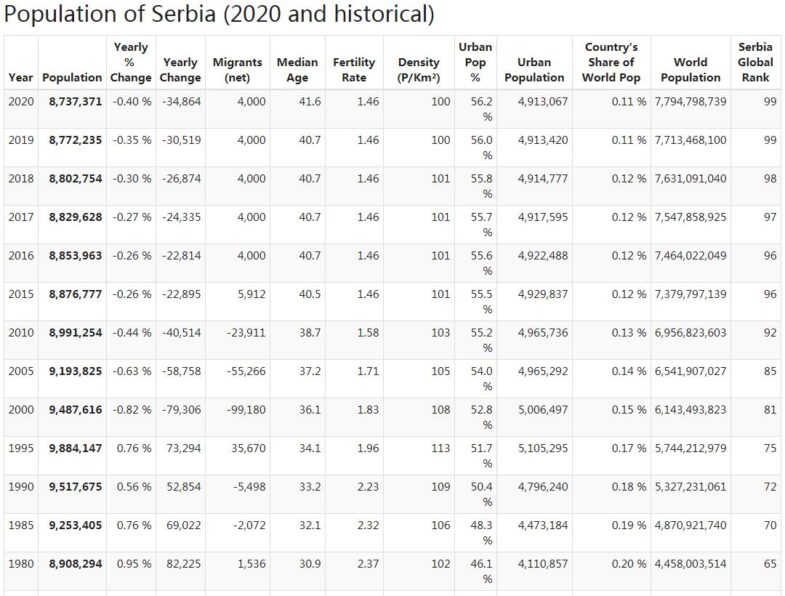 However, the trade union movement is strongly divided, for example in the view of privatization. Catus is completely against these and has demanded that large industrial companies remain in state ownership. Nezavistnost is positive about the privatizations, but not how these have gone.

According to the legislation, equal pay applies to equal work, but in practice women have lower wages than men. Almost as many women as men gain employment.

In a comprehensive anti-corruption effort, 79 people are arrested during the Christmas holidays, including a former minister, two deputy ministers, entrepreneurs and businessmen. Also arrested are the head of the Serbian Anti-Corruption Authority between 2009 and 2012, human rights lawyer Zorana Marković. In addition to corruption, the charges also apply to money laundering and abuse of public service and more. Their operations should have cost the Serbian state more than EUR 100 million.

The first chapters of Serbia’s membership negotiations with the EU begin in Brussels. Chapter 35 concerns normalized relations with Kosovo and 32 concerns financial control. Next in turn are chapters 23 and 24, which pertain to the judiciary and fundamental freedoms and rights; they are expected to open in early 2016. In its annual report on Serbia, the European Commission last month said that the country has made great strides in its reform efforts towards EU membership but that more needs to be done in areas such as the fight against corruption, the independence of the judiciary as well as freedom of press and expression.

The Minister of Defense is dismissed

Defense Minister Bratislav Gašić is dismissed by Prime Minister Aleksandar Vučić after sexist comments to a female journalist. Gašić has previously been ill looking for a series of clumsy statements and questionable actions.

Aleksandar Vulin, Minister of Labor and Responsible for Refugee Affairs, announces that Serbia will now only allow people coming from “war zones”, ie Syria, Iraq and Afghanistan. Migrants from Asia and Africa who are mainly economic refugees will be rejected. This is done so that they do not “get stuck” in Serbia, as Slovenia and Croatia also refuse to accept them.

Regional summit on the refugee crisis

Aleksandar Vučić and his Bulgarian and Romanian Prime Minister colleagues declare after a meeting in Bulgaria that they intend to close their countries’ borders on refugees if other EU countries stop receiving them. The three countries “refuse to become a buffer between Turkey and the rest of Europe”. Since mid-September, nearly 250,000 refugees have passed through the Balkan countries.

During its joint annual meeting with the International Monetary Fund (IMF), the World Bank provides Serbia with a loan of EUR 89.5 million. The money will go to projects to create new jobs in Serbia and increase the country’s competitiveness.

Education results from Kosovo are recognized

Serbia and Kosovo agree to recognize diplomas from each other’s high schools, universities and colleges.

The refugee crisis through Europe has intensified during the month, not least since Hungary closed its border and refugees heading north thus risking “getting stuck” in Serbia. Soon, many are instead trying to move on via Croatia and Slovenia. Croatia will soon close all border crossings except one. The EU decides that Serbia, together with Macedonia, will receive EUR 17 million for refugee reception.

The Serbian government decides that the minimum wage for the coming year should remain at 131 Serbian dinars (about one euro) per hour, after representatives of trade unions and employers failed to agree. The union had demanded an increase to 143.5 dinars, but the government responded to employers’ demands for an unchanged minimum wage.

Serbia and Kosovo enter into an agreement for Serbia to provide Serbian students in Kosovo with Serbian textbooks, while Albanian-speaking pupils in southern Serbia should be able to receive textbooks in Albanian from Kosovo.

Vienna Summit on the Refugee Crisis

Serbia is among the countries of the Western Balkans participating in an EU summit in Vienna on the refugee crisis. The EU promises SEK 1.7 billion in emergency aid to Macedonia and Serbia, but the countries also want to see a common EU policy, where all EU countries share the responsibility for the refugees, something that does not currently exist and seems difficult to achieve. It is estimated that around 3,000 refugees cross the border into Macedonia each day and then continue through Serbia on their way to the EU and the Schengen area – initially Hungary, but most continue to countries such as Austria, Germany, the Netherlands and Sweden. On September 5, it is estimated that all barbed wire fencing Hungary is under construction along the border with Serbia is ready, but so far many refugees have managed to get past the fence that already exists.

In the EU-led talks in Brussels between Serbia and Kosovo, agreements are concluded in four important areas: telecommunications, energy and the use of the bridge over the Ibar river in the shared city of Mitrovica. Most important for Serbs, however, is the establishment of an association of ten Serbian-dominated municipalities in the north (Zajednica srpskih opština, ZSO), which will receive far-reaching self-government in healthcare, education, urban planning and economic development. The area will also have its own president, vice president, decision-making body and flag. Serbia is also given the right to finance ZSO.

The radio and TV station Studio B, which was seen as a symbol of freedom under Slobodan Milošević’s rule in the late 1990s, is sold by Belgrade City to the private Maxim media for 530,000 euros. It is the biggest deal in the ongoing privatization of Serbian media. Two other major media companies that are out for sale at the same time as Studio B, the news agency Tanjug and the Novi Sad-based daily newspaper Dnevnik, fail to find buyers. So far, only eight of 72 state-owned media companies have been able to sell.

Prime Minister Aleksandar Vučić expresses strong concern over the four-meter-high fence that Hungary has begun to build along the 175-kilometer border with Serbia. The fence will stop the growing number of refugees and illegal immigrants from mainly Afghanistan, Iraq and Syria, but also from Kosovo, which via Serbia enters Hungary, and thus the EU; In the first half of 2015, almost 80,000 people came to Hungary, almost all from Serbia.

20 years in prison for “The Cocaine King of the Balkans”

In Belgrade, a special court for organized crime sentenced Darko Šarić, “the cocaine king of the Balkans”, to 20 years in prison. Šarić, arrested in March 2014 after five years in prison, is accused of being the brain behind and the leader of a powerful crime syndicate, which in 2008-2009 smuggled nearly six tons of cocaine from South America to Europe. At the same time with Šarić, 21 gang members are sentenced to long prison terms.

In an attempt to downplay the contradictions between Bosnia-Herzegovina and Serbia, the three members of the Bosnian Presidential Council, Bosniak Bakir Izetbegović, Serbian Mladen Ivanić and Croatian Dragan Čović, the week after the events in Srebrenica on a visit to Belgrade Serbian political leadership.

Serbia’s Prime Minister, Aleksandar Vučić, is coming to Srebrenica in Bosnia to attend the 20-year commemoration of the massacre of 8,000 Muslim men and boys in the city. However, he is greeted with a burp and forced to seek shelter from stone throwers.

As the first Serbian head of government ever, Aleksandar Vučić visits Albania, where he has discussions with his Albanian colleague, Edi Rama. The two prime ministers want to see good relations between their countries despite disagreement over Kosovo, whose independence Albania supports while Serbia still sees it as a Serbian province. See also November 2014.

The arrest of the massacre in Srebrenica

In Serbia, eight Bosnians were arrested for involvement in the massacre of about 8,000 Muslim men and boys in the city of Srebrenica in 1995. The eight are former militiamen in the wartime Bosnian police force and are believed to have killed around 1,000 Bosnians in a barn outside the city. They will probably be tried in Serbia and not sent to the International War Criminal Tribunal in the Netherlands The Hague. The arrests were coordinated by the authorities of Serbia and Bosnia and Herzegovina, but this is the first time that Serbia is leading an operation aimed at bringing the worst perpetrators of the massacre to account for their crimes.

After ten months, EU-led talks in Brussels between Serbia and Kosovo will resume on the details of the agreement in principle made in 2014 between the countries (see March 2014). The delay is due to the fact that both countries have had parliamentary elections in the meantime and not least that the Kosovo government formation has since taken so long. The Serbian delegation is led by Prime Minister Aleksandar Vučić, the Kosovan by Prime Minister Isa Mustafa. The EU is represented by the new foreign representative, Italian Federica Mogherini. At this first meeting on February 9, it is decided how the items should be distributed within the judiciary, especially in those parts of northern Kosovo where many Serbs reside.

The International Court of Justice (ICJ) in The Hague rejects both Croatia’s and Serbia’s accusations of genocide during the Balkan wars in the 1990s. Croatia, which submitted its case to the court as early as 1999, believes that the Serbian attacks against the city of Vukovar in 1991, when more than 10,000 Croats were killed, should be classed as genocide; Serbia’s counter-notification against Croatia from 2010 concerns the Croatians’ readmission of the Krajina area in 1995, when more than 200,000 Croatian Serbs were forced away and several hundred were killed. The ICJ has so far only acknowledged one case of genocide: the 1995 Bosnian Srebrenica massacre.