The vast majority of Senegalese earn their living wholly or partly outside the formal economy, through small-scale cultivation for their own use or through, for example, street sales, crafts or household services. Unemployment is high and contributes to many people looking abroad for a livelihood.

Only a few percent of the workforce is estimated to have a formal employment. The low figure makes it difficult to calculate the proportion of people who lack employment. But unemployment is high, especially among young people.

The proportion of union members is low, as few have formal employment. At the same time, the trade union movement has a relatively strong position, although it is now fragmented. The largest trade union organization is the Confédération Nationale des Travailleurs du Sénégal (CNTS), which has close ties to the Socialist Party and which was the only allowed trade union organization until the 1970s. Since then, a number of new unions have been formed. All employees have the right to organize themselves, except police, customs officers and judges.

Workers have the right to strike, although it became somewhat more difficult to strike legally in the 2001 Constitution. During the 2000s, more and more violations of trade union rights were reported. 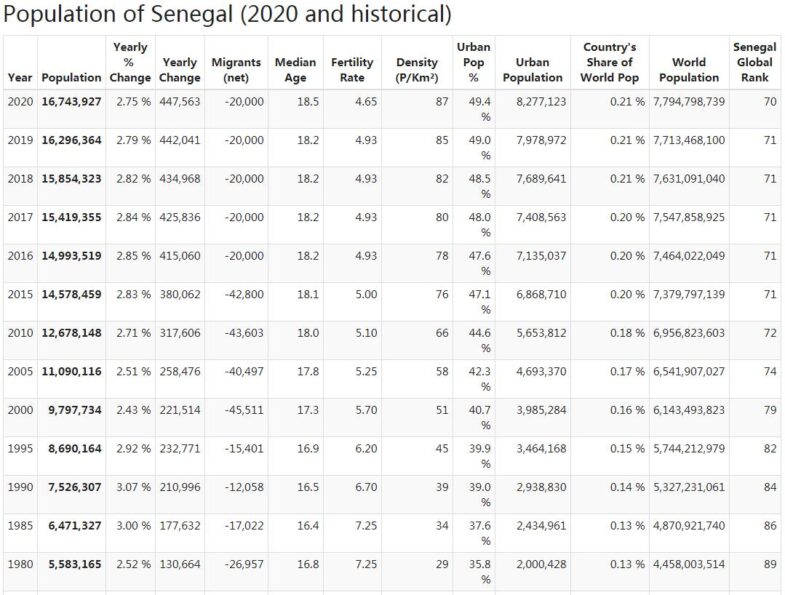 Eight West African countries using the CFA franc regional currency agree in Abidjan, Ivory Coast, to change its name to eco. The intention is that it will continue to be linked to the euro, but the eight countries, Benin, Burkina Faso, Guinea-Bissau, Ivory Coast, Mali, Niger, Senegal and Togo will no longer have to store 50 percent of their foreign exchange reserves in France and France should no longer have any representative on the board of the currency union. The intention is for the change to take effect in 2020. French President Emmanuel Macron, who is in place in Abidjan, says in connection with the fact that colonialism in Africa was “a serious mistake”. Critics of the CFA franc see it as a remnant from the colonial era, others as a guarantor of financial stability.

Abdou Elinkine Diatta, secretary general of the political section of the separatist movement MFDC in Casamance in the southern part of the country, and another person shot to death in Mlomp, about seven miles northwest of Ziguinchor. The assailants believed to belong to a rival faction of the MFDC arrive at the scene on a motorcycle. The violence is believed to have been triggered by a peacekeeper from a third faction that MFDC should drop its weapons and try to reach a negotiated solution.

Dakar’s former mayor Khalifa Sall, who was pardoned by President Macky Sall in September, now says he intends to return to politics shortly. He was elected to the National Assembly in 2017, but has not been able to take his place there. But the pardon does not mean that he gets back all his civil rights, among other things he is not entitled to participate in elections.

President Macky Sall pardons Khalifa Sall, former mayor of Dakar who was sentenced in 2018 to a year in prison for embezzlement of the equivalent of $ 3 million (see March 2018). The verdict meant that Khalifa Sall (who is not related to the president) could not stand in the February 2019 presidential election. The president’s critics believe that the allegations against Khalifa Sall, one of Senegal’s most popular politicians, were fabricated to prevent him from participating. Two more people are pardoned at the same time.

This week, the Muslim Brotherhood Mouridia inaugurates a new mosque, Massalikul Jinaan (The Road to Paradise), with 30,000 seats in the capital Dakar. It was built in the poor neighborhood of Bopp on land that the brotherhood received from the state.

The government announces that all women suffering from breast or cervical cancer should receive free chemotherapy at all public hospitals from October this year. About $ 1.6 billion has been set aside for this. When it comes to other cancer treatments, the state should account for 60 percent of the costs, a doubling compared to before.

Karim Wade gets top post in PDS, the decision splits the party

Former President Abdoulaye Wade appoints his son, Karim Wade, to second-term in the Senegal Democratic Party (PDS). In practice, he becomes party leader with the task of modernizing the party and devising new strategies. This happens despite the fact that Karim Wade does not seem intent on leaving Qatar, where he has been in self-elected exile since 2016. The appointment is made despite opposition from several high-ranking PDS members. Karim Wade thus replaces Oumar Sarr, who ended up in disarray with the former president when he decided to take part in the national dialogue that President Macky Sall initiated in May. Sarr now leads the faction that opposes Karim Wade’s influence.

The leader of the Socialist Party dies

Ousmane Tanor Dieng, who for many years led the Socialist Party (PS), dies in Paris. It is considered to exacerbate the cracks in PS, where Khalifa Sall, Dakar’s former mayor, who was not allowed to run in the February 2019 presidential election, opposed PS to continue to be part of the ruling alliance Benno Bokk Yakaar (BBY) and to support Macky Sall’s candidacy.

The President’s brother leaves the post of corruption charge

President Macky Sall’s brother Aliou Sall resigns as head of a government savings institution (Caisse des Depots et Consignations, CDC) after allegations that he secretly received large sums of money from an energy company that sold gas extraction rights to the oil company BP. The disclosure of the deal made by the British media company BBC in June has sparked widespread protests in Senegal. In connection with his departure, Aliou Sall says that the information about him is untrue. President Sall has argued that the charges are aimed at destabilizing the country.

The National Assembly votes to abandon the post of Prime Minister. 124 members approve the proposal and seven members vote against it after a nine-hour debate. The opposition has criticized the constitutional amendment, which it believes gives a person too much power. However, Minister of Justice Malick Sall claims that the change is only for administrative reasons.

Mahammed Boun Abdallah Dionne, who was recently re-appointed as head of government, is commissioned by President Macky Sall to begin reform work where an important point is to abolish the Prime Minister’s post. The decision is justified by the fact that power should come closer to the people, and that the president should have direct contact with the various departments. The idea is that this will accelerate the reform process, whose main points are to create employment for young Senegalese, through educational efforts, special measures for girls and women and better housing and better environment. Dionne, who has also been appointed secretary-general of the republic, will eventually continue his political work in that role.

As expected, President Macky Sall wins the presidential election already in the first round with just over 58 percent of the vote. He is followed by Idrissa Seck with 20.5 percent and Ousmane Sonko with just under 16 percent. Seck and Sonko reject the result, but at the same time say that it is unprofitable to go to court to have it tried there. However, the two politicians who could have threatened Sall, Khalifa Sall and Karim Wade, were not allowed to participate (see January 2019). The election is monitored by some 5,000 observers, including from the EU. They approve the choice.

Unrest breaks out before the election

A man is stabbed to death when supporters of the opposition clash with government supporters. The dead man, who supported President Macky Sall, was taken to a hospital in Tamboucounda, some 40 miles east of the capital, Dakar. Even a motorcyclist is killed when he leaves the scene at high speed. Electoral disputes also occur elsewhere in Senegal, despite religious leaders calling for calm before the election. Later, around 20 people are arrested and a number of knives and clubs are seized.

The Constitutional Court gives the go-ahead for five candidates to stand in the presidential election on February 24. It is incumbent President Macky Sall, Ousmane Sonko, a rising star in the opposition, former Prime Minister Idrissa Seck, Madicke Niang, with close ties to former President Abdoulaye Wade, as well as El Hadji Sall from the Party of Unity and Collection (PUR). Two candidates are rejected: Dakar’s former mayor Khalifa Sall, who is also one of the country’s most popular politicians, and Karim Wade, son of the former president. They can appeal the decision until January 20. It is noted that President Sall has already become more visible, not least at the inauguration of new major ventures, such as a new train line between Dakar and Diamnadio (a new city just under construction about 2.5 miles from the capital), a new museum and a new motorway. Most of it indicates that Sall will win the election already in the first round of elections.

The Supreme Court rejects Dakar’s former mayor Khalifa Sall’s appeal of the five-year corruption conviction against him. That probably means he won’t be able to stand in the presidential election on February 24.