The majority of those who have jobs are engaged in agriculture or fishing. The public sector is another major employer.

The official unemployment rate is reported to be just under 14 percent, but in fact the figure is assumed to be much higher. Since there is no unemployment insurance fund, not all unemployed people register. Among those who do not have jobs, some find their livelihood in the informal sector.

The minimum wage for government employees is $ 50 a month, which is not enough to give a family a decent life. Many people therefore have two jobs, and others manage thanks to money that emigrated family members send home.

In cocoa cultivations, the work is often unregulated and the conditions are very tough.

According to the Constitution, the Tomeans have the right to form trade unions, strike and to collectively negotiate their wages, but since the state is one of the largest employers, in practice, the wage earners do not have much opportunity to negotiate wages. There are two unions, the Organização Nacional dos Trabalhadores de São Tomé e Príncipe-Central Sindica (ONTSTP-CS), and the União Geral de Trabalhadores de São Tomé e Príncipe (UGI-STP). 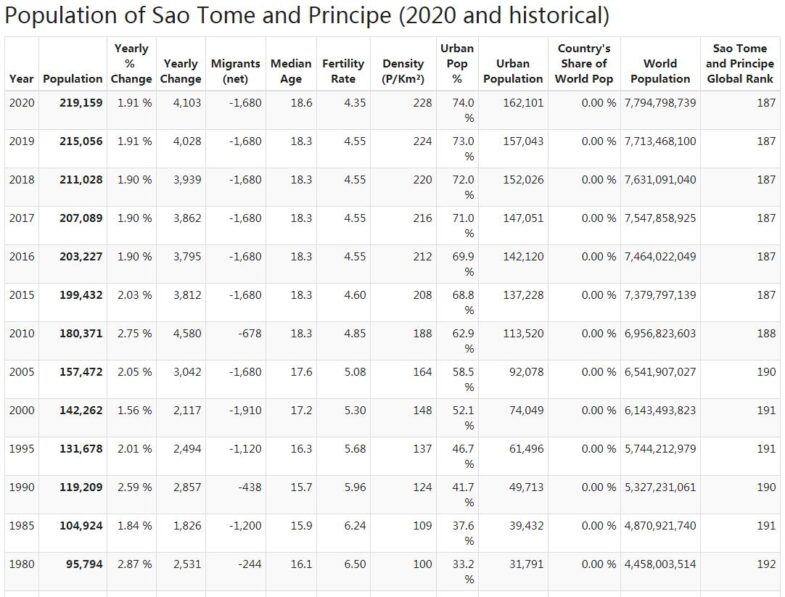 Children under the age of 18 are not allowed to work, but it appears that children work on the plantations, as salesmen and in agriculture or households.

In the second and decisive round of the presidential election, President Manuel Pinto da Costa, who is running for independence, wins 53 percent of the vote against 47 percent for Parliament’s President Evaristo de Carvalho from the ruling Democratic Action Party (ADI). Aurelio Martins from the opposition Liberal Movement for São Tomé and the Príncipe / Social Democratic Party (MLSTP-PSD) is already eliminated in the first round of elections.

Angola invests in the country

State Angolan oil company Sonangol gets licenses to operate the port and airport of São Tomé in exchange for major investments on the island.