Among the Rwandans who have a formal employment, just over four in ten work in agriculture, just under a fifth in industry and the rest in the service sector. The vast majority of residents, however, are outside the formal labor market and rely on small-scale agriculture.

In practice, around 90 percent of Rwandans work with agriculture. There is a shortage of experienced staff in the country’s small industry. Many business leaders and industry officials were Tutsis who were murdered during the 1994 genocide. Prior to that, educated Tutsis usually ended up in the private business, as they were excluded from almost the entire state sector.

There are trade unions, but their business is circumscribed. The state often violates labor law, and employers rarely dismiss people who try to form a trade union. Police and military may not organize trade unions.

It is difficult to carry out legal strikes, since the term “socially necessary activities” that can be exempted from the strike right is given a wide and sweeping interpretation. There are generally a number of bureaucratic barriers that hamper trade union activity and limit trade unions’ right to collective bargaining. 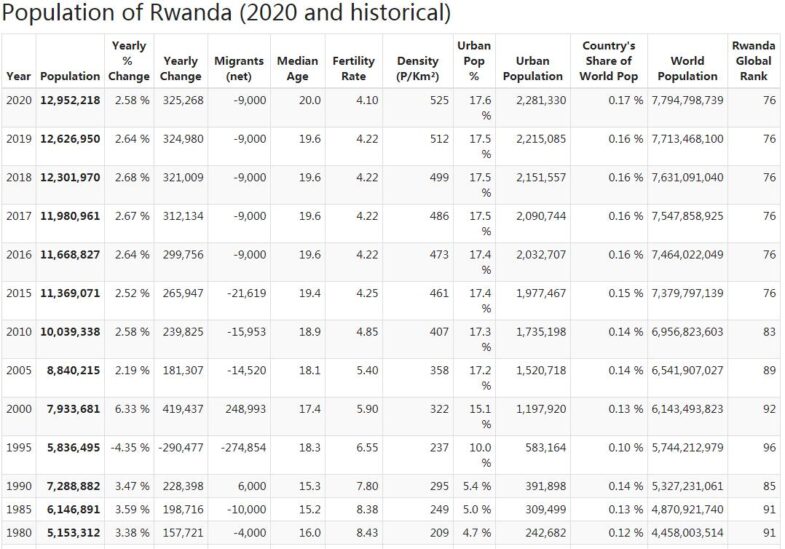 The constitutional amendment that gives Kagame the opportunity to run for office in the 2017 presidential election comes into force. Kagame thanks the trust but gives no indication of whether he intends to run for re-election.

The proposal that Kagame should be able to run for office in the 2017 presidential election, despite contravening the Constitution, receives overwhelming support in a referendum. More than 98 percent of participants support the proposal. The United States and the EU refer to the constitutional change as a threat to democracy. The United States appeals to Kagame to respect current restrictions on the president’s mandate. The EU believes that the referendum is being carried out too quickly, without the inhabitants having the opportunity to get involved in the issue and without giving the opposition enough time to argue against the change.

The UN court for Rwanda is wound up

UN court for war crimes in Rwanda completes its work after 21 years.

Ladislas Ntaganzwa, who is suspected to be one of the top leaders of the 1994 genocide, is arrested in Congo-Kinshasa. He is accused of organizing massacres of thousands of Tutsis and inciting rape and other sexual assaults on a large number of women. The United States has announced a $ 5 million reward to the one who seizes him. Ntaganzwa is prosecuted by the UN Court of Rwanda, but the case has been transferred to the Rwandan judiciary.

The Supreme Court is setting the stage for the constitutional change that will allow Kagame to run for office in the 2017 presidential election. The proposal must also be approved in a referendum. At the same time, the lower house votes to reduce the seven-year term to five years.

Spain’s highest court cancels the international arrest warrants issued in 2008 for some 40 Rwandan former senior government officials and officials, including Karenzi Karake (see August 2015), and shuts down several legal processes. However, twenty of the Rwandans still face trial if they come to Spain. Rwandans are suspected of crimes against humanity, genocide and terrorism.

Security manager is not disclosed

British prosecutors close the investigation into Rwandan security chief Karenzi Karake, citing that the crimes he as a foreign citizen is accused of having committed in his home country are not covered by British law. Thus, Karake is not handed over to Spain (see June 2015).

Parliament votes for Kagame to be re-elected

After voting for three weeks on the residents’ views on the proposed constitutional amendment, Parliament votes to implement it. It means that an exception is made for President ent Kagame so that he can stand for re-election a third time in the 2017 election. Otherwise, a President should only be able to sit for two five-year terms. The unpopular Democratic Green Party has tried to stop the constitutional change through court, but it has been difficult to find a lawyer who can think of bringing its case.

Rwanda and 25 other countries agree on a new Tripartite Free Trade Area, which covers most of Africa from Egypt in the north to South Africa in the south. Negotiations are required before the agreement can enter into force and the agreement is approved by the national parliaments.

Karenzi Karake, head of Rwanda’s security service, is arrested by British police at the request of Spanish prosecutors who want to investigate him for war crimes with links to the 1994 genocide. The Rwanda government describes the arrest as “outrageous”. Karake is released to the castle. A decision on extradition to Spain is made in August.

The ruling party FPR supports a proposal to amend the constitution so that President Kagame can stand for re-election a third time when his term expires in 2017. Over 3.7 million citizens are reported to have signed a petition calling for the constitutional article restricting the president’s time in power for two seven-year periods shall be changed.

France reveals the secret stamp of documents relating to the country’s relations with Rwanda during the years 1990-1955. The documents should be available to researchers as well as relatives of the victims of the 1994 genocide. Rwanda’s Tutsid-dominated government has in all years accused France of supporting the then-hut government that was behind the genocide, something that France has always denied. The Government of Rwanda hopes the documents will provide answers to many “dark questions”.

Jail for intercourse with hutugerilla

Four men and two women are sentenced to life imprisonment for conspiring with the hutugerilla FDLR. Five people are sentenced to ten years in prison each for the same crime. The convicted are convicted of trying to overthrow the Rwandan government in collaboration with the FDLR, which operates in Congo-Kinshasa.

Police are convicted of murder of activist

Two policemen are each sentenced to 20 years in prison for the 2013 murder of an anti-corruption activist. The murdered Gustave Makonene worked for the organization Transparency International and investigated the smuggling of minerals from Congo-Kinshasa. The UN has accused Rwanda of supporting the Congolese rebel movement M23 with money from mineral smuggling.