The Russian labor market has undergone major changes. During the Soviet era, industrial work dominated. Since then, the service sector has become increasingly important. The number of unemployed people is decreasing as the entire population shrinks, and the government has therefore encouraged the immigration of labor.

During the Soviet era, there was officially no unemployment, but underemployment was high in many areas. The tasks were not enough for everyone. During the crisis years in the 1990s, unemployment rose steeply, reaching a peak of 13 percent in 1999. Subsequently, it fell by a few breaks, including during the crisis year 2009. In recent years, the proportion of officially registered unemployed has been just over five percent. However, the statistics are considered uncertain as many unemployed people do not register because they still receive no compensation.

The largest single group of professionals is commercial employees (14 percent). Then comes industrial workers. Other large groups are teachers and people who work with transport and communication.

The proportion of working women is 55 percent. Women are over-represented in the service profession. According to law, hundreds of professions are reserved for men. For example, women are not allowed to work as welders, lorry drivers, aircraft mechanics, sailors or blacksmiths.

The labor laws include the right to organize, the right to negotiate and the right to strike, but with a number of restrictions. Occasionally, union members are subjected to harassment by both employers and police. 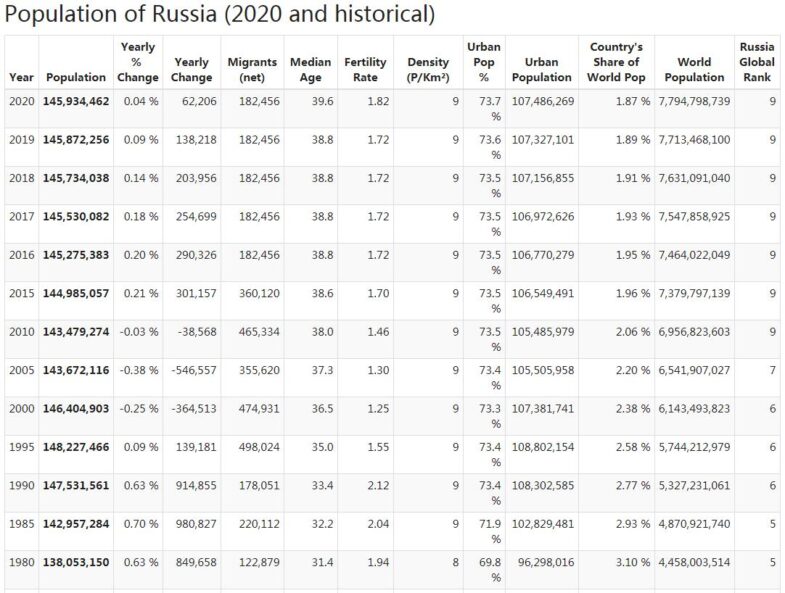 The official unions that existed during the Soviet era have been reformed and now call themselves independent, but the most important trade union, the Federation of Independent Russian Trade Unions (FNPR), is considered to be close to the government.

Moscow is shut down

More stringent rules are being introduced in Moscow, the city worst affected by the corona pandemic. Moscow residents are now only allowed to leave their homes to shop or go to the pharmacy. The only exceptions are people with community-carrying jobs such as health care professionals and police, as well as the sick who need care. It is also allowed to leash the dog or go out with the trash. Similar restrictions are imposed on other holdings in the country. A few days earlier, President Putin announced that all Russians must stay home for a week from March 28. All restaurants and cafes in the country must also remain closed. The borders to the outside world are now completely closed.

A referendum is delayed for the future

President Putin announces that the planned referendum on the new constitutional reforms (see March 10) is postponed. According to the original plan, the vote would have been held on April 22. No new date is specified.

Yes in court to constitutional changes

The Constitutional Court gives a green light to the constitutional amendments recently approved by Parliament, which gives President Putin the opportunity to remain president until 2036 (see May 10, 2019). Opposition leaders such as Aleksey Navalnyj criticize the reforms and say they make Putin president for life. In recent days, opposition supporters have protested against the constitutional changes through a number of one-man demonstrations, the only form of demonstration that does not require permission. 18,000 people, including lawyers and human rights activists, have also signed an online protest against the changes.

The borders to the outside world are closed

Russia is closing all borders to the outside world in an effort to limit the spread of the corona virus. Only Russian citizens are allowed into the country. At the same time, Moscow’s mayor Sergei Sobjanin announces new relationship orders in the city. Schools and universities are closed, crowds of more than 50 people are banned and older people are encouraged to stay home. Three days later, the first death in covid-19 is reported when an elderly multi-sick woman in Moscow dies.

Putin gets a chance to remain president until 2036

Parliament’s lower house, the duma, approves the constitutional amendments proposed by President Putin at the beginning of the year (see January 15, 2020). At the same time, Duman approves a number of new amendments to the Constitution, one of which is that Putin’s current and previous terms of office should be deleted, “zeroed” when his current mandate expires in 2024. This means that Putin can then stand for two new terms and, if he wins, remain as president until 2036. The proposal had been tabled the same day by former cosmonaut Valentina Tereshkova, who now sits in the duma for Putin’s support party United Russia. Tereshkova justified the proposal that Putin has “a massive authority”. The next day, the duma adopts the amendments in a third and final vote and the reform package goes to Parliament’s upper house where it is also approved. Putin, who previously ruled out changing the constitution to remain president, now announces that he can agree to a zeroing of his term in office, citing the global instability that the Corona Pandemic is expected to bring. The proposals will be submitted to an advisory referendum scheduled for April 22. Before that, a ruling from the Constitutional Court is expected on Tereshkova’s proposal.

President Putin receives his Turkish counterpart Recep Tayyip Erdoğan in Moscow to discuss a ceasefire in northwestern Syria between Turkish forces on the one hand and Russian-backed Syrian government forces on the other. After six hours of talks, Putin and Erdoğan agree to freeze the fronts, set up a security corridor and send out emergency broadcasts to civilians.

Authorities report that Moscow has received its first case of covid-19. A young man who visited Italy became ill after returning home and is now hospitalized. At the end of February, Russia imposed restrictions on entry from South Korea and Iran, two of the countries so far worst hit by coronas.

Corona case in Siberia – the border with China is closed

Russia reports its first cases of coronary infection. Two Chinese in Siberia have been tested positive and isolated. The day before, Russia has announced that the border with China should be closed.

Just over a week after President Putin presented his political reform proposals (see January 15, 2020), they are adopted by Parliament’s lower house, the duma. The proposals are only debated for a couple of hours before being pushed through. (A bill must be adopted by the Duma three times in order to be approved; it must also be approved by the House of Parliament, the Federation Council.)

Russians are charged with attempted murder

Bulgarian prosecutors are prosecuting three Russians who are accused of trying to kill three Bulgarians in 2015. Emilyan Grebev, owner of a weapons factory, Grebev’s son and the head of the factory were subjected to some form of substance that poisoned them. The case has been linked to the nerve poison attack that took place against a former Russian double agent and his daughter in the UK in 2018, although no nerve poison was used against the Bulgarians. The substances found in the Bulgarian case included pesticides. According to one theory, the deed may have been motivated by the fact that Grebev’s business operations threatened powerful Russian interests in the country. The names of the three Russians are not mentioned when the prosecution is presented.

Parliament approves Michail Misjustin as new Prime Minister after Dimitrij Medvedev. Thus, the country gets a head of government who is not a politician but a technocrat. Misjustin was, until his appointment, the head of the Russian tax authority and has become known for having modernized the authority, which significantly increased the state’s tax revenue. In his speech to Parliament, Misjustin promises “real change” and says that the government must restore confidence in the business world and work for innovation. Misjustin has a week to put together a government. Parliament also votes to make Medvedev Vice-President of the National Security Council.

The government resigns after President Putin proposed a number of constitutional changes. Putin presents his proposals in his annual speech to Members of Parliament. Putin wants, among other things, to give Parliament greater influence over the formation of government. Putin further plans to give the advisory government greater power and change the legislation on presidential elections. In the future, it should not be possible to sit more than two terms of office in total for the presidential post. (Putin is just about to enter his fourth term.) At the same time, the demands on presidential candidates and other people holding public office should be tightened. For example, the president may not have had citizenship or residence permit in another country and must have lived in Russia for at least 25 years. A few hours after Putin’s speech, Prime Minister Medvedev announces that the government is departing to prepare for Putin’s reforms. Putin appoints the head of the Russian tax office, Michail Misjustin, to Medvedev’s successor. Medvedev is scheduled to become Deputy Chief of the National Security Council headed by Putin.