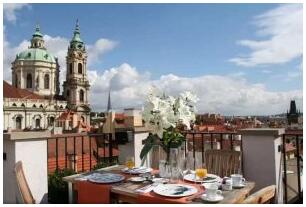 Aria is among the most beautiful hotels on this side of the center of Prague. The five-star luxury hotel is located right next to the castle, in beautiful surroundings.

From here you have about half of the main sights nearby. If you want to walk to Gamlebytorget, it takes you about 15 minutes. The hotel’s rooftop terrace and restaurant offer great views over the red roofs of Mala Strana.

The hotel also has a fitness center, spa, bar and lounge, as well as 51 beautifully decorated rooms with air conditioning. This is an excellent option for those who want to stay very well at an affordable price, and perhaps especially for couples who are on a romantic city break in Prague.

Bishop’s House is rated with 4.5 well-deserved stars, and is among the best of the many small and pleasant hotels in Mala Strana. The hotel is housed in a lovely house, classic for this neighborhood.

The 26 rooms, and the rest of the interior of the hotel, are modern, bright and cozy. All rooms are air conditioned, the reception is open 24 hours a day, the breakfast buffet is good, but the best thing about the hotel is the location. It is located in a relatively quiet corner, just a stone’s throw from Charles Bridge.

Here you live surrounded by old and beautiful architecture, cobbled streets, nice restaurants, and with a short way to most of the center. The prices at Bishop’s House are at times almost ridiculously low, compared to what you get for your money. 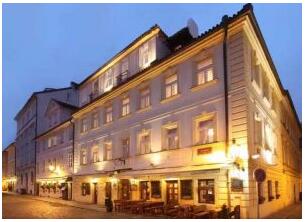 U Zlatých nůžek is a four star hotel with only 10 beautifully decorated rooms. It is located on a pretty, cobbled square, just to the left of the gunpowder tower at the end of Charles Bridge.

This part of Mala Strana is called Kampa, and you are thus one of the closest neighbors to Kampa Park, the restaurant owned and operated by Norwegian Nils Jebens.

In the opposite direction of Charles Bridge, and only a minute away on foot, is a beautiful park of the same name. The hotel is a very good option for anyone who wants a short distance to both the castle area and the old town. 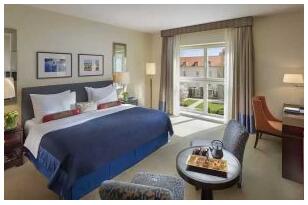 Mandarin Oriental is the five-star hotel that world-famous artists and actors often stay at when they are in Prague. Although the competition is fierce, this is perhaps the best luxury hotel in town.

It is located in a quiet part of Mala Strana, right near Kampa Park and the Norwegian Embassy in the Czech Republic. From here you walk to Charles Bridge in about five minutes. You also get a great arrival up to the castle if you want. The cable car that goes to the top of Petrin Hill is right next to the hotel, and from Petrin you can stroll to the castle in green surroundings.

The prices of Mandarin Oriental are of course among the highest in Prague, but it is quite possible to get a great room there for less than three thousand kroner a night.

Where should you stay in a hotel in Prague?

There are primarily two areas that can be considered the best to stay in when you are on a city break in Prague. One is Mala Strana, which can be translated to “small town”, or “the small area” in Norwegian. This is located between the castle and the river, connected to the other part of the center via, among other things, Charles Bridge. Mala Strana is a very beautiful area, with Gothic architecture, many sights, and some of Prague’s best restaurants.

The second area that should be considered is what is called the Old Town of Prague (the buildings in the district are nevertheless of more recent date than Mala Strana). Here we believe that it pays to choose a hotel that is located within the stretch between Gamlebytorget and the National Theater (Narodni Divadlo), and preferably with a relatively short distance to the river. If you come too far from Gamlebytorget, the streets and houses are not as inviting.

Price level for hotels in Prague

Although Prague is one of Europe’s most popular destinations for city breaks, prices are noticeably lower than in most comparable capitals. Admittedly, this depends on when you order. If you are out late and want to visit the city in the middle of the tourist season, the cost of accommodation naturally increases.

It is quite possible to find a double room in a three or four star hotel, for about a thousand kroner a night, even in the best neighborhoods. If you want to hit the big time and stay in a five-star hotel, it happens that you get away with prices that are less than half of what you can expect to pay in cities such as Amsterdam , London and Paris .

A gem of a hotel in Prague

We have previously written about The Golden Well on our blog , a fantastic hotel located just below the castle. If you want to stay extremely stately, and experience superb service, you should consider staying there when you visit Prague. Read the full article here .