Most of those who have formal employment work in the service sector. The second largest employer is the industry where the mining industry dominates. The formerly extensive public sector has lost much weight.

More than half of the urban working population is estimated to be active in the informal sector, including people who have a regular job but need to increase their income. The informal economy also includes self-catering agriculture, which is the most common activity in rural areas.

A high percentage of Peruvian children work, most in agriculture but also as street vendors.

The official unemployment rate is relatively low, but since the statistics are only based on people who are actively looking for jobs, it reflects only part of the reality. How many people completely lack employment among rural small farmers and farm workers is unclear.

The Constitution guarantees freedom of organization and ensures all employees the right to negotiate and strike right.

The trade union movement grew strongly during the 1970s, but weakened and split during the 1990s as President Alberto Fujimori retained the right to form trade unions. The strike right was also limited, while working time regulation, job security and co-determination were largely abolished. Since then, the government has restored union rights, but union members still continue to be harassed or dismissed. Foreign companies in particular have sometimes violated the rules. 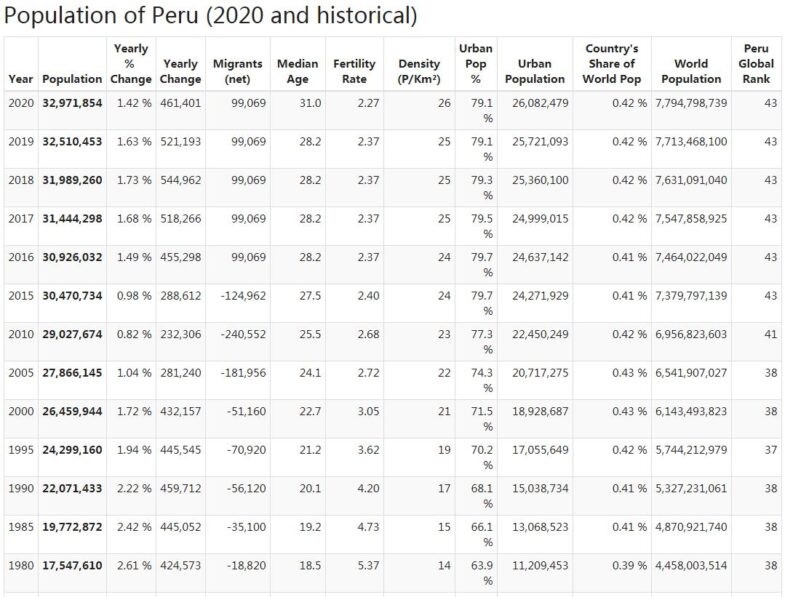 The union connection has never been high. The largest trade union organization is the CGTP (Confederación General de Trabajadores del Perú) with close ties to the country’s Communist Party.

Keiko Fujimori is released from detention

Opposition leader Keiko Fujimori is released from preventive detention after just over a year (see October 2018), following a decision in the Constitutional Court. Already in September, the Supreme Court decided to halve the detention period, which originally would have lasted three years. The charges against her remain, but she is now allowed to handle them freely. Keiko Fujimori’s popularity has declined since the corruption scandal erupted.

The political crisis turned up a lap when President Martín Vizcarra dissolves Congress and announces new elections. The opposition-controlled Congress responds by shutting down Vizcarra as they accuse of a “coup,” and appointing Vice President Mercedes Aráoz as new leader. But military leaders and policemen head to the government building to show their support for the president and Aráoz resigns the following day. She also leaves the Vice President post. President Vizcarra, in a televised speech, justifies the drastic measure that Congress has refused to implement the necessary reforms and to announce the next election (see July 2019). The president’s remarks come after Congress defied his warnings and approved new members of the Constitutional Court, although some of them are suspected of crimes. The re-election to Congress is expected on January 26, 2020.

The government announces that a 45-day effort will be initiated by security forces on November 1, to eradicate illegal coca cultivation in Vraem. This is the first time such an effort has been made in Vraem, an area that is estimated to account for about 70 percent of cocaine production in Peru. According to the Government, the effort must be followed by several. Exceptions and military control have prevailed in the area for decades, but no extinction attempts have been made in the past due to concerns about violent clashes with cocoa growers and rebels.

President: “Past elections next election”

President Martín Vizcarra unexpectedly proposes that the next presidential and congressional elections be held a little over a year in advance, to put an end to what he calls an “institutional crisis”. The proposal must first be approved by Congress and then in a referendum to get rid. Elections could then be held in April 2020, instead of in July 2021. The political situation in Peru is largely blocked by sharp contradictions between Vizcarra and his government, and the Congress dominated by the opposition party FP. Vizcarra has previously threatened to dissolve the congress and force new elections there. So now he offers himself to leave early too. A central conflict between the president and Congress is his proposal to give the Supreme Court the right to deprive Congress members of their prosecution immunity. Congress, which today has that right, does not want to release it.

Former President Toledo is arrested in the United States

Former President Alejandro Toledo is arrested in the US and is expected to be extradited to his home country where he is charged with corruption (see also June 2018). Toledo is suspected to have received $ 20 million from Brazilian construction giant Odebrecht, in exchange for contracts for the construction of a road between Peru and Brazil. He is charged with abuse of power and money laundering, among other things, for the Peruvian state.

Prosecution is being brought against former President Ollanta Humala and his wife, Nadine Heredia. According to prosecutors, there is overwhelming evidence that the couple received over $ 3 million from Brazilian construction giant Odebrecht, in connection with the presidential campaigns of 2006 and 2011. Humala is the first former head of state and government charged in the huge corruption scandal. Prosecutors are serving 20 years in prison for him, and 26 years for Heredia. See also June 2018 and April 2019.

Former President Alan García shakes his head when the police come to arrest him on charges of corruption (see June 10, 2018). He later died in hospital. Just a few days earlier, the 69-year-old García (president 1985-1990 and 2006) has tweeted that there is absolutely no evidence against him. He has claimed that he was subjected to political persecution and sought asylum in Uruguay in the fall of 2018, without success.

Former President Pedro Pablo Kuczynski is arrested in his home in Lima, at the request of prosecutors investigating the Odebrech scandal. Brazilian construction giant Odebrecht has acknowledged that at least $ 29 million has been paid to Peruvian leaders since 2004. Kuczynski claims he has been subjected to political persecution and that Odebrecht has not pointed him out. However, Odebrecht stated that nearly $ 5 million was paid to two companies with links to Kuczynski between 2004 and 2012. The company’s Peruchef also testified that Odebrecht paid $ 300,000 for Kuczynski’s election campaign. In addition to Kuczynski himself, his former secretary and his private driver are also arrested. After a little over a week, 80-year-old Kuczynski is sentenced to three years in preventive detention.

A new regional forum is formed

President Martín Vizcarra and seven other South American presidents, during a meeting in Chile, launch the new Regional Forum for the Progress of South America (Prosur) which is intended to replace Unasur – a regional body that has effectively ceased to function. Prosecur will mainly support democracy and the market economy, it says. The initiative has been taken by the presidents of Chile and Colombia, and the other participating countries are Argentina, Brazil, Ecuador, Guyana and Paraguay. Representatives of the left-wing governments in Bolivia, Surinam and Uruguay attend the meeting, but those countries do not join Prosur. Venezuela was not invited.

Military base to protect the rainforest

A new military base is opened in the Amazon to prevent illegal mining, the main cause of the deforestation that threatens the world’s largest rainforest. Defense Minister José Huerta notes that it is a political decision to establish a presence in the Tambopata Nature Reserve in the Madre de Dios region, known as the main location for illegal mining in Peru.

State prosecutor Pedro Chavarry resigns after allegations of trying to obstruct the extensive corruption investigation into the Brazilian construction group Odebrecht. Among other things, he has kicked two prosecutors with central roles in the investigation, but was forced to reinstate them after street protests around the country. Chavarry has been on a collision course with President Martín Vizcarra several times since he was appointed in the summer of 2018. He is now himself suspected of abuse of power and of supporting a criminal organization.