Fewer than half of the jobs in Paraguay are in the formal sector, which is a smaller proportion than in the rest of Latin America. Among those who have a formal employment, about one in five are unionized. Like the industrialization, the trade union movement has a short tradition.

Since the fall of the dictator Stroessner in 1989, the trade union has gained greater influence, but trade union activists still risk being harassed and dismissed. The rules for forming trade unions, and local trade unions, are so strict and formal that it is impossible to conduct trade activities in smaller workplaces. In practice, the right to strike is also limited by a strict regulatory framework.

The trade union movement is divided into a large number of small associations, some of which are independent and others are affiliated to one of several major unions. Many have links to a political party.

Police and military are not entitled to form trade unions. In the private sector, trade union representation is often lacking, which is partly due to threats, harassment and anti-union campaigns from employers. In the agricultural sector, there are also few union members, but many are members of farmer organizations.

Only about 4 percent of permanent employees receive their wages regulated by collective agreements. In the neighboring countries Uruguay, Argentina and Brazil, the corresponding figure is between 60 and 90 percent. One reason for the low figure is, according to the UN, that more than 90 percent of the collective agreements concluded in the public sector are canceled by the intervention of the Secretaria de la Función Publica, the public regulator.

More than half of the employees have a salary that is below the official minimum level, according to official data. More than half also work more than 40 hours a week, which is the statutory working time. 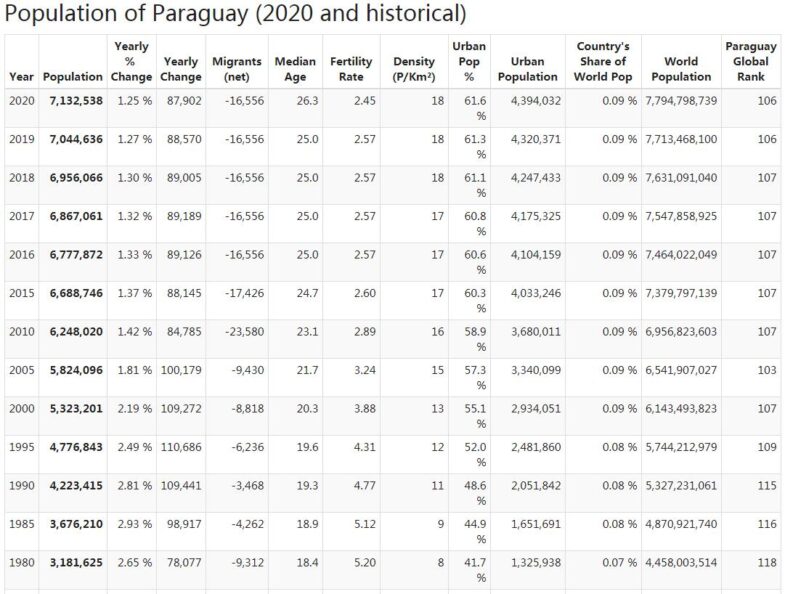 Open unemployment is relatively modest, but underemployment and activities in the informal sector are so common that in practice, very many are left without proper support. According to official figures, almost 38 percent of young people were either in work or education in 2016.

Labor law is good on paper but there are major shortcomings in practice. In particular, women are discriminated against in the labor market. Every fifth woman works in households, where conditions are poor and unsafe.

Conditions that are reminiscent of slavery sometimes occur in the countryside and affect especially the indigenous people. According to the UN agency ILO, thousands of people work almost as slaves to livestock ranches in the Chaco region. They have so low wages that they are forced to oblige when they buy their supplies at high prices in the ranch’s stores. Debts just grow and they can never get rid of them. The ranches are guarded by armed guards who prevent them from escaping.

Corruption in the electoral court is revealed

It is revealed in media that the wife, ex-wife and a daughter of a member of the Supreme Electoral Court (TSJE) are all paid by TSJE, without having any assignment.

Backlash for the Colorado Party in local elections

The Colorado Party suffers defeat in the municipal elections. Not least, it is a setback when the ruling party loses the second most important political post in the country, the mayor’s post in Asunción. The incumbent mayor is defeated despite the support of Cartes, including financially. In the country as a whole, the Colorado Party increases slightly compared to the municipal elections in 2010, but losses in five provincial capitals are staggering.

The Minister of Defense resigns

Defense Minister Bernardino Soto Estigarribia resigns in protest against the army chief’s having undermined his position by intervening in appointments.

The left-wing guerrilla EPP blasts a power line in the Department of San Pedro and 765,000 people suffer power outages. The attack shows that the EPP has not been defeated to the extent that the government has claimed.

Hundreds of thousands of Paraguayans attend a Mass in Asuncion held by Pope Francis. The Pope visits Paraguay during a tour that also included Ecuador and Bolivia. During the trip, he talked about social injustice and apologized for the role of the Catholic Church in the Spanish colonial brutalization of Latin America.

The central bank publishes figures showing a record fall in the trade surplus, with 52 percent in one year. A major reason is a sharp fall in prices for important export goods, especially soybeans.

Drugs are feared to infiltrate politics

An audio recording raises concerns that drug lords have managed to infiltrate the policy: a convicted drug smuggler is heard talking to two senators and the head of the drug-fighting agency Senad. The drug smuggler talks about links between drug lords and local authorities. He names a large number of politicians, prosecutors and judges and says that he himself paid Senad for information. Since President Cartes is on a journey in Europe, Vice President Juan Afara will start by trying to deal with the situation. An official investigation into the charges is initiated by the prosecutor.

The Senate votes to lift the diplomatic immunity of the South American Football Association Conmebol, which has its headquarters in Asuncion. President Cartes is expected to approve the decision that comes in the aftermath of the huge corruption scandal that shakes the Fifa International Football Association. Several of those prosecuted in the Fifa Army, by US prosecutors, are located within Conmebol.

Amnesty International and a group of human rights experts from the UN criticize Paraguay for denying a 10-year-old girl an abortion. The girl is reported to have become pregnant since being raped by her stepfather. The men have gripes.

Farmers murdered by the guerrillas

Two Germans are shot to death after a hostage frame on a farm in Concepción in the north. According to the authorities, the left-wing guerrilla EPP is behind the murder of the couple, who operated a livestock farm for 30 years.

Two members of an outbreak group from the left guerrilla EPP are killed in a firefight, among them leader Albino Jara. The Association of Armed Peasants (Asociación campesina armada, ACA) is, according to the authorities, a newly formed group which, like the EPP, is labeled as a criminal gang.