Around two-thirds of Panamans work in the comprehensive service sector. The official open unemployment rate has dropped from double-digit numbers at the beginning of the 1990s, but there is widespread hidden unemployment and underemployment.

Formal unemployment has remained below 5 percent throughout the 2010s. At the same time, around 40 per cent is estimated to work in the informal sector.

More than one in ten formal employees are unionized. The right to form a trade union applies only to private workplaces with at least 40 employees, and there may only be one trade union per workplace. Public employees may not belong to trade unions, but may form associations to negotiate collective agreements. At least 50 people are required to form such a compound. The right of strike is limited.

In the free trade zone in Colón, the union rights of employees are often limited, in general the right to organize is lacking. 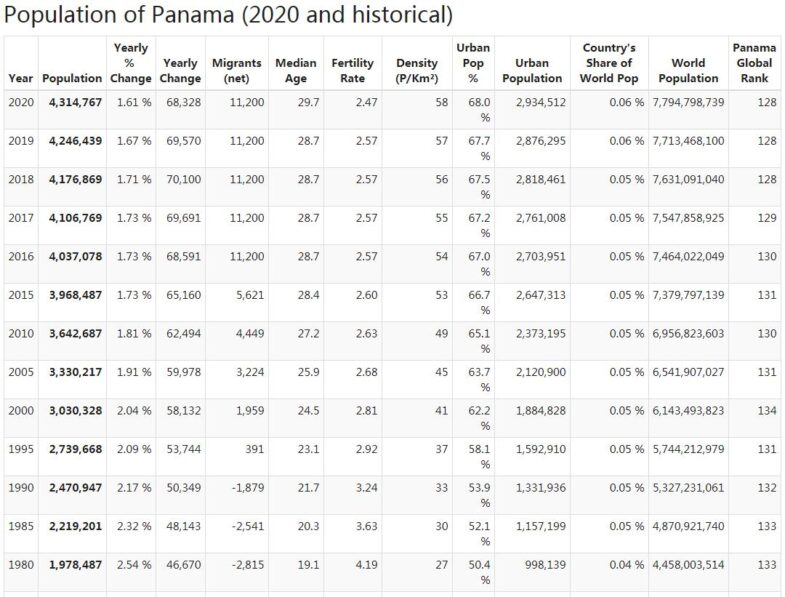 The Prosecutor’s Office states that a mass grave was found with the remains of at least 70 people killed in connection with the US invasion in 1989. The mass grave is at a cemetery in Panama City. The United States invaded Panama and deposed dictator Manuel Noriega. According to official data, about 500 people died in the course of the invasion, but there are rights groups who believe it involved several thousand deaths. The Inter-American Human Rights Commission (IACHR) ruled in 2018 that the United States was guilty of human rights abuses and should pay compensation to the victims.

The rules for the current quarantine are tightened when the government announces that women and men may only leave at different times from 1 April. Women are allowed to spend two hours Monday, Wednesday and Friday, while Tuesday, Thursday and Saturday are men’s days. On Sundays no one is allowed to go out. During the first week of the quarantine, 2,000 people were arrested for violating the rules that then applied.

President Laurentino Cortizo quarantines the entire country on account of the coronavirus causing covid-19. Panama is the worst affected country in the region, although the numbers of cases are still lower here than in Europe and the United States. From March 25, residents are allowed to leave their homes only to carry out necessary tasks, such as buying food. Already, all air traffic to the country has been stopped.

The EU once again places Panama on its “black list” of tax havens. President Laurentino Cortizo says in a comment that the EU decision is arbitrary and does not take into account the “great efforts” that Panama has made with money laundering lawsand tax evasion. In 2018, the EU moved Panama from the blacklist to the gray list. It happened since the country promised to adapt to international tax information rules, following the extensive scandal with the so-called Panama Documents – a leak from a Panamanian law firm that revealed tax fraud and fraud worldwide. But the EU does not believe that Panama has implemented the tax reforms promised. The Cayman Islands, Palau and Seychelles are also transferred to the black list, which subsequently has a total of twelve nations and territories. Almost all are small island states.

National Assembly Speaker Marcos Castillero postpones a scheduled debate because of violent protests outside the parliament building. The debate concerns constitutional amendments that President Laurentino Cortizo went to election and which was approved in a first reading the day before. The purpose is to try to curb corruption by, among other things, reducing the president’s influence over the nominations of judges to the Supreme Court and banning more than one re-election for MPs. Opponents made up of university students, trade unions and other social groups believe that the reform process should have included several and was handled by a constituent assembly, rather than by the National Assembly.

A court acquits former President Ricardo Martinelli of suspicions of corruption and eavesdropping (see June 2018) and he is released from custody. Martinelli has repeatedly declared himself innocent of the charges. The prosecutors had pleaded for 21 years in prison.

Cortizo takes over as president

Laurentino Cortizo takes over as the country’s new president at a ceremony in which a number of Latin American leaders and Spain’s King Felipe attend. In his inaugural speech, Cortizo says his government will work to keep Panama away from all lists of corruption-afflicted countries, and to make the country the best service and business center in Latin America. The international body FATF once again put Panama on its list of countries that need to be monitored for corruption, after a three-year hiatus.

Social Democratic PRD candidate Laurentino “Nito” Cortizo wins in the presidential election, but the victory margin is significantly smaller than predicted. According to preliminary results, Cortizo, which was well ahead of the other candidates in the polls, is supported by 33 percent of voters, just two percentage points more than the closest challenger Rómulo Roux from the right-wing Democratic change. Independent candidate Ricardo Lombana gets close to 20 percent of the vote, while the ruling Panamist Party candidate José Blandón gets only 10 percent. In the contemporary parliamentary elections, the PRD retains the role of largest party with 35 seats, while the CD loses almost half and gets 18 seats, the Panamist party gets 8, the Liberal Republican Nationalist Movement (Molirena) gets 5 and independent candidates remain 5.

Hundreds of thousands of young people attend when Pope Francis completes a five-day visit in conjunction with the World Youth Days, which the Catholic Church organizes every three years and which Panama now hosts. During his visit, the Pope has, among other things, taken Central American migrants into defense and admitted that the Catholic Church has been harmed by scandals involving sexual abuse.