Omani citizens have traditionally worked in government and the public sector, while industry and the private services sector are mainly managed by foreign migrant workers.

However, the rapid population growth among Omani has increased the pressure on the government to obtain new jobs, especially for young Omani. Unemployment among citizens has been at 15-20 percent during the 2010 century.

The government therefore wants to “remanufacture” the jobs, that is, to replace foreign labor with Omani. Since 2013, the proportion of foreigners must not exceed 33 percent of the population. One problem, however, is that the Omani are largely lacking the training required for technically advanced jobs in the oil sector, even though a number of domestic courses have been started in recent years.

Reorganization requirements have led to an increase in the proportion of private sector Omani. At the same time, the reorganization of the wage picture is being counteracted: a foreign worker receives significantly lower salary than an Omani citizen with similar duties, which makes it easier for private companies to hire foreigners for cost reasons. As a result of government policy, the number of guest workers has nevertheless decreased.

The Omanis are protected by a well-developed labor law, which guarantees pension at the age of 55, among other things. For women, relatively generous rules governing child unemployment and equal pay apply for equal work. Migrant workers do not enjoy the same rights in the labor market. Occasionally, female guest workers, employed in Omani homes, are subjected to abuse. However, the conditions for guest workers are about to be improved (see Calendar). 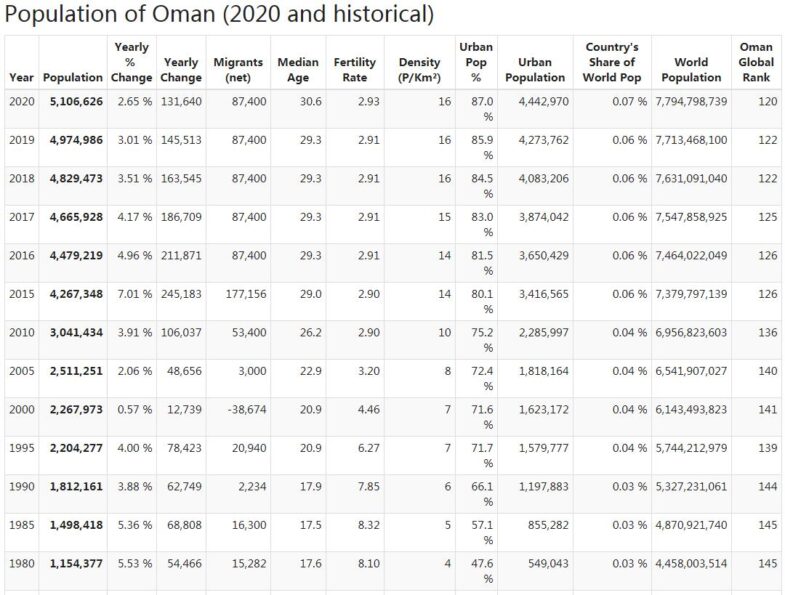 Since 2006, union operations have been allowed for both Omani and guest workers.

Election to the advisory house

Elections are held for the consultative lower house. 25 of the sitting members are re-elected; including the only woman in the congregation. The other 60 are new members.

The Sultan returns to Oman

Sultan Qabus returns from Germany where he has been cared for cancer since July 2014.

Four men detained in the US Guantánamo detention camp in Cuba are being transferred to Oman. The men are from Yemen and have been held as prisoners of war since 2002, without being charged with any crime. They are now being brought to third countries because the United States does not want to send prisoners to the unstable Yemen. In June, another six Yemenites will fly from Guantánamo to Oman.