Around eight out of ten working Norwegians are found in the service sector, while the industry employs about one fifth. Only a few percent of the workforce is dependent on agriculture and fisheries.

The oil and gas industry, which is important to the country’s economy, directly or indirectly employs less than a tenth of the labor force. Almost a third of the employees work in the public sector, most in the health care sector.

In comparison with other European countries, Norway has had a low unemployment rate. Unemployment is highest in the northernmost counties such as Finnmark and Nordland. The Oslo area and Vestlandet have the lowest unemployment rate, and there is a large labor shortage in the service sector, healthcare and the technical industry, among others. A lot of manpower must be sourced from outside, among others from Sweden. The salary level is considerably higher than in Sweden.

In international comparison, an unusually large proportion of the population, about 80 percent of Norwegians aged 15 to 64, are employed. The reason for the high proportion of working people is that the vast majority of women work outside the home. By contrast, the number of hours worked per employee is low according to the economic cooperation organization OECD.

Norway has a high union connection, especially among workers. The National Organization in Norway (LO) has close relations with the Labor Party. The officials are, to a lesser extent, organizationally affiliated. Most important on the employer side is the Confederation of Norwegian Business and Industry (NHO). 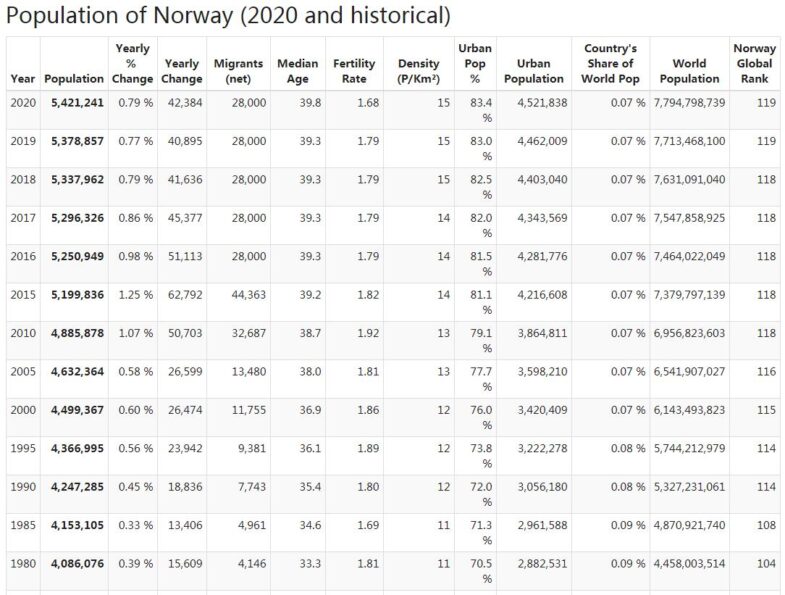 In order to reduce the flow of refugees from Afghanistan to Norway, the Norwegian government publishes advertisements entitled “Tougher asylum rules in Norway” in two newspapers in Afghanistan. The ad calls on Afghans not to sell everything they own and put their fate in the hands of human smugglers just to risk being sent home by the Norwegian state, which believes parts of Afghanistan are safe enough to prevent people from being granted asylum.

The Norwegian is murdered by IS

Islamic State (IS) murders a Norwegian and a Chinese hostage taken by the extreme Islamist group. Two months earlier, the Norwegian government had refused to pay the ransom demanded by IS to release the hostage.

Withdrawal from the Oil Fund

The government announces that it must take money from the country’s oil fund to get the 2016 budget together. The withdrawal amounts to around NOK 3.7 billion of the approximately SEK 7,000 billion that the fund is currently worth. The fund is expected to grow by a further around SEK 500 billion in 2016, so the withdrawal is marginal in this context.

The government decides that preparations for the exploitation of the large Johan Sverdrup gas field in the North Sea can be initiated. The project is led by the Norwegian oil company Statoil.

First summer camp after the massacre at Utøya

Four years after the massacre at Utøya (see July 2011), the Labor Party’s youth association is again organizing a summer camp on the island.

The Storting agrees on the refugee quota

Three men are sentenced to prison for membership in or support for the Islamic State (IS). The men will be the first to be convicted in accordance with the terrorist law introduced two years ago (see June 2013). According to the Norwegian intelligence service, more than 70 Norwegian citizens have participated, or are still participating, in the war in Syria.

The looming government crisis is averted

A conflict within the government arises around the handling of some 60 asylum-seeking children, whose parents have lived in Norway for many years. The children’s parents have been denied their asylum applications after the government introduced stricter asylum rules (see March 2014). The Christian People’s Party threatens to withdraw its support to the government in the parliament unless the families get their case tried again, which the Progress Party opposes. The crisis is averted when the Progress Party gives in and allows families to have their asylum cases re-examined.

Apologies to the country’s Roma

Prime Minister Solberg formally apologizes for how the country’s Roma were treated before and after the Second World War (see February 2015). She promises compensation to those involved.

Report on Norway’s treatment of Roma in the 1930s

A report from the government reveals that Roma with Norwegian citizenship during the 1930s were refused to return to Norway after leaving the country. As a consequence, some of these Roma were murdered in the Nazi concentration camps in Germany.

Trial against suspected IS warriors

A trial is being opened in a court in Oslo against two men, suspected of participating in the militant Sunni Muslim organization Islamic State’s (IS) side in the war in Syria (see Syria, current policy). The prosecution is labeled “aid to terrorist organization”. One of the two defendants is suspected of trying to send military equipment to a sibling in Syria. The men risk up to six years in prison.

Norway presents plans to reduce its greenhouse gas emissions by at least 40 percent by 2030. The country is thus adapting to the EU’s climate targets.