A large majority of Nigerians support themselves in the informal sector of the economy. Unemployment and underemployment are estimated to be high, but official statistics are missing.

Only a small part of the inhabitants have a formal employment. Most of them work in the public sector, but through privatizations and cuts, the proportion of public employees has decreased. More than a third are employed in the manufacturing industry. The construction sector also offers some jobs. The mining industry employs only half a percent of its employees.

The lack of domestic jobs causes many men to move to neighboring countries to work. However, unrest in Mali and Libya in recent years has prompted hundreds of thousands of Nigerian guest workers to return home, which has further increased competition for the jobs available.

There are three unions in the country. Under Tandja’s rule in 1999–2010, it was common for trade unions to be harassed, but conditions improved after the coup.

The right to strike is enshrined in the constitution and strikes are common, especially among civil servants because the salary is not paid.

There are a number of labor market laws that regulate working hours, wages and other conditions for those who have an employment. Formally, there is a 40-hour week, but exceptions to this rule are common. There is a minimum wage for each occupational category. The lowest salaries are equivalent to a few hundred kronor per month. 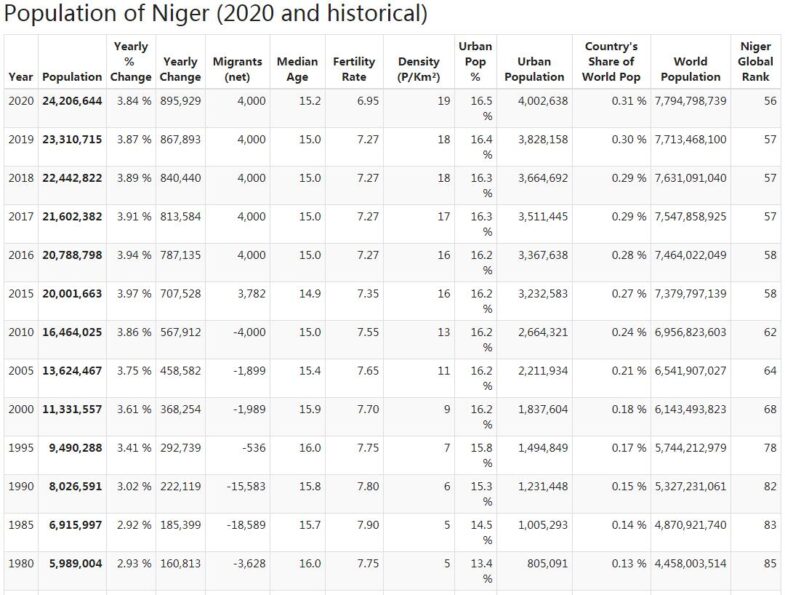 Child labor is widespread even though it is prohibited, as is forced labor and slave labor (see Social conditions).

President Issoufou says that a coup attempt has been averted, that a number of people have been arrested and that the situation is again “under control”. The Interior Minister says that nine arrested officers will be brought before a military court. The opposition requires proof that a coup has been planned.

“No time to review the voting lengths”

The government first appears to meet the opposition and decides that the voting lengths should be reviewed and updated before the February 2016 presidential election.

Boko Haram attacks the city in the southeast

The Islamist extremist movement Boko Haram executes a nightly scare against a village in the Bosso region in the southeast. Eighteen people are reported to have been killed and about 100 homes burned down.

The Election Commission admits that there are shortcomings in voting lengths. The errors are pointed out by the opposition, which organizes demonstrations to get the lists corrected before the February 2016 presidential election.

Amadou is arrested at the airport

Opposition politician and former Speaker of Parliament Hama Amadou returns to Niger to begin his campaign for the 2016 presidential election. Amadou left the country after being accused of participation in trafficking in infants (see September 2014). He is arrested immediately upon arrival at the airport.

Schools in Diffa are forced to close

The UN reports that about 150 schools with a total of over 12,000 pupils in the Diffa region have been forced to close recently due to Boko Haram’s violent progress. The students are housed in refugee camps where they do not have access to education.

Issoufou is running for re-election

The PNDS government appoints President Issoufou as its candidate in the 2016 presidential election.

About 30 American soldiers arrive in Niger to train the country’s guerrilla forces.

Nigerian fighter bombs one of Boko Haram’s strongholds in southeast Niger and seizes some 20 members of the Islamist extremist movement.

Authorities are announcing 15 days of state of emergency in the Diffar region in the southeast, after some 40 people have been killed in several acts for which Boko Haram is suspected. Since February 2015, the Islamist group has carried out at least 57 attacks in Diffa according to the UN. In Diffa there are also 150,000 people who have moved there from Nigeria away from Boko Haram.

Some 30 parties, community organizations and trade unions form a political alliance called the Republican People’s Front (FPR) to challenge the government in the 2016 elections. Ousmane. However, the Alliance fails to agree on a joint presidential candidate, nor does it stand in the parliamentary elections with a common electoral manifesto.

Presidential elections are announced until February 21, 2016. Any second round of elections will be held on March 20.

Niger agrees with Nigeria, Benin, Cameroon and Chad to form a joint military force with the mission to fight the Islamist terror group Boko Haram, which is moving across borders in the region. Nigeria will lead the force, which however will get its base in Chad’s capital N’Djamena.

Great demonstration against the government

Thousands of protesters, mainly young people, take part in a protest against the Niamey government. The dissatisfaction concerns a number of issues: tax increases, electricity shortages that darken cities several days in a row, and a decision to increase the number of MPs from 113 to 171 in the 2016 election.

Parliament adopts a law that can provide up to 30 years in prison for smuggling of people. The intention is to try to slow down the migration flow through Africa across the Mediterranean to Europe. Those who arrange the smuggling can also be fined the equivalent of € 45,000. The desert town of Agadèz in northern Niger is an important hub for the smuggling routes to the Mediterranean.

The border with Burkina Faso should be fenced

Niger and Burkina Faso agree to begin work on unraveling the border between the two countries set by the International Court of Justice (ICJ) in The Hague. The decision means that Burkina Faso will take over 786 square kilometers of land and 14 locations from Niger, which in return will receive 277 square kilometers and four locations from the neighboring country. The changes must be implemented before the end of 2016.

Boko Haram attacks a Nigerian army base on an island in Lake Chad. According to the Nigerian government, 46 soldiers, 156 terrorists and 25 civilians are killed in the attack. For fear of new attacks by the Islamist extremist movement, thousands of people are fleeing from locals from islands in the area.

Dozens of dead in air strikes

At least 36 people are reported to have been killed and 27 injured in an air strike against a village near the Nigeria border. The attack is carried out when many people have gathered for a funeral. It is unclear where the plane is coming from. Nigeria’s Air Force denies interference.

The government announces state of emergency in the Diffa region near the border with Nigeria. Thus, the security forces are given increased powers to, among other things, carry out house searches.

Parliament voted unanimously for Niger to contribute soldiers to the planned international force against the extremist movement Boko Haram. The country will send 750 soldiers to Nigeria. In southern Niger, more than 3,000 soldiers are in readiness pending orders to go against the Islamists who enter the country.

Nigerian Islamist extremist movement Boko Haram for the first time attacks Niger. The army says it repels the attack on the cities of Diffa and Bosso with the help of Chadian flight and that 109 rebels are killed. The UN Security Council calls on Nigeria’s neighboring countries to step up military efforts against Boko Haram, which has taken control of a large area in northeastern Nigeria and is also a threat to Cameroon. A few days later, Boko Haram makes another attack on the border town of Diffa, but again this time they are reported to be driven away.

The charges are being laid against some 20 people accused of trafficking infants, including the opposition leader and former parliament’s President Hama Amadou (see September 2014). A court states that it lacks jurisdiction to adjudicate in the case where something similar has not been subject to judicial review before. Prosecutors have the right to appeal the decision.

At least ten people are killed and over 170 injured in two days with violent protests in the cities of Niamey and Zinder. The protests are triggered when the French satire magazine Charlie Hebdo publishes a satire drawing that is said to represent the Prophet Muhammad. Dozens of churches are set on fire and stores owned by Christians are vandalized, as is a French cultural center and a Christian school.