Trade unions have traditionally held a strong position in New Zealand, but their influence has weakened in recent decades. Unemployment rose after the global financial crisis in 2008 to fall slightly after 2012. Towards the end of the 2010s, unemployment remained at a relatively low level.

After the economic crisis, unemployment reached over 11 percent in 1991 (see Modern History). It then dropped for nearly two decades, and was down to about 4 percent at the beginning of 2008. Then the global financial crisis hit, and the share of unemployed reached a maximum well above 6 percent in 2012. In the next five years, unemployment was around 5 percent. Subsequently, in the fall of 2017, unemployment fell to just under 5 per cent, which was the lowest level since 2008.

There is a shortage of highly educated labor. The labor shortage has made it easier for women, Maoris and Polynesian immigrants to enter the labor market. However, women’s wages are usually clearly lower than men’s.

Among the Maoris, unemployment is significantly higher than among the inhabitants overall. About one in ten Maoris were missing work in the mid-2010s. Even among residents from Pacific Islands, unemployment was almost twice as high. 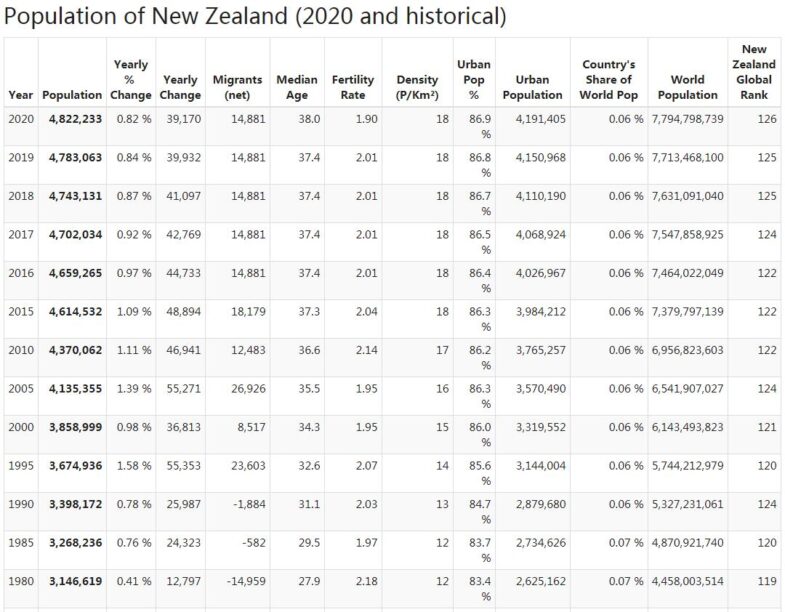 In the early 1990s, the then bourgeois government abolished the compulsory affiliation with the unions, the central negotiating system was dissolved and the right to strike was restricted. The union rate has decreased since the beginning of the 2010s and today around one fifth of the employees are members of any trade union. There are just over 130 different unions. The vast majority belong to the New Zealand Council of Trade Unions (CTU), but there are also a few small independent unions. Military employees do not have the right to organize trade unions.

The Labor-led tripartite government promised when it took office in 2017 to gradually raise the minimum wage from $ 15.75 an hour to $ 20 in 2021 as part of fighting the economic gaps in the country.

Working hours have been deregulated and many employees work more than 50 hours a week. Since 2007, four weeks of vacation has been valid.

New anti-terrorism legislation is being passed in Parliament to meet the growing global threat from extremist groups.

The Nationalist Party wins the election

The Minister of Justice resigns

Referendum on the flag

Prime Minister Key announces that parliamentary elections will be held on September 20, 2014. He also wants a referendum to decide to replace the country’s flag. He believes that the flag is outdated and that it is reminiscent of New Zealand’s colonial past with the British flag embedded in one corner.

New Zealand dairy giant Fonterra, the world’s largest exporter of dairy products, announces that some of its products have been infected with a bacterium that can be deadly. China and a number of other major export markets are withdrawing Fonterra’s products. Prime Minister John Key criticizes the company and sets out an investigation into concerns that the scandal will damage New Zealand’s foreign trade. Dairy products account for close to a quarter of the country’s exports (see Industry).

Mining companies are convicted of damages

The mining company Pike River Coal, which operated the mine in which 29 people were killed in a gas explosion (see November 2010 and November 2012), is sentenced to pay damages to the survivor’s survivors and to two men who survived the accident. The damages amount to a total of 3.41 million New Zealand dollars, approximately SEK 17 million. The company is also fined NZ $ 760,000. No individual is prosecuted in connection with the mining accident.

Parliament is voting for stricter asylum laws which, among other things, provide the opportunity to intern asylum seekers for six months (see Current policy).

Prime Minister John Key announces that the reconstruction of Christchurch following the earthquake in February 2011 will cost NZ $ 40 billion, close to SEK 210 billion. According to Key, this is the largest and most complicated economic project in New Zealand’s history. Of the approximately 100,000 houses damaged, about 7,000 must be leveled. About 70 percent of the shops, hotels and office buildings in the city center have been demolished.

New Zealand becomes the first in the Pacific with a law that allows same-sex marriage. It is endorsed by Parliament with 77 votes to 44 following an extensive public debate, with the Catholic Church leading the opposition.

Key is accused of buddy recruitment

Prime Minister Key receives harsh criticism from the opposition and the media for misleading the environment about how the head of the security service was appointed. It is revealed that he was hand picked by Key and that they both knew each other since school time. Key says he forgot he called his old schoolmate and invited him to apply.

Prime Minister Key agrees that New Zealand will each year receive 150 of the thousands of boat refugees who apply to Australia but are placed at asylum centers in Papua New Guinea, among others. The opposition is critical, and the human rights organization Amnesty International, which condemned Australia’s asylum policy, regards New Zealand’s cooperation as extremely disheartening.