The labor market is relatively free of conflicts and is characterized by agreements in consensus. The trade union movement has since the 1980s in exchange for reduced working hours and other benefits agreed to limit wage increases and allow the labor market and working hours to become more flexible.

A large proportion of the population is employed, but women in particular often work part-time. About three out of four women are part-time employees. Expensive childcare is one reason for this.

Many Dutch people have been sick or prematurely retired through previously generous schemes and the government has tried to attract some back to the labor market.

Unemployment fell sharply from a peak of 12 percent in 1986 to less than 3 percent in the early 2000s. In the context of the economic crisis in Europe, it rose but has dropped again. Unemployment is higher among women than among men, as well as among foreign-born compared to native-born Dutch.

The rules for unemployment benefits have been tightened several times since 1980. The principle is that the longer a person has worked, the longer he or she will receive compensation.

The proportion of unionized members of the labor force has halved in a few decades and is just under a fifth. Nevertheless, the influence of trade unions is great, as collective agreements are usually extended by the government to non-union members as well. In addition, the government and employers ‘and employees’ organizations cooperate on a number of issues, including in the advisory body Stichting van de Arbeid (Star). 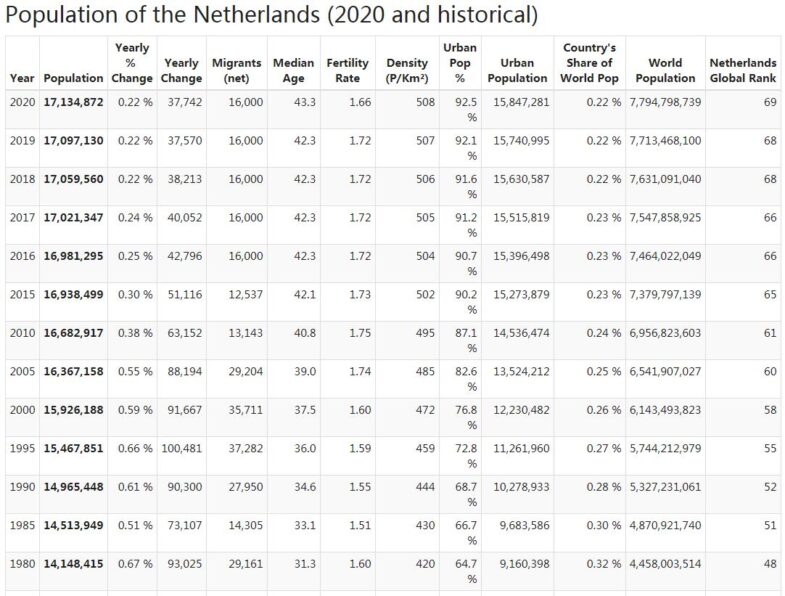 Like other institutions in society, trade unions were initially divided according to religious and political guidelines. The largest national organization, FNV, was created when former socialist and Catholic associations merged in the 1970s. FNV organizes around two-thirds of the unions. A smaller federation, CNV, has Protestant origins while the small MHP is a union of officials and academics.

Defense Minister Ank Bijleveld said in a statement on TV that the Netherlands is in a “cyber war” against Russia. Just over a week earlier, four Russian intelligence agents have been expelled, following allegations that in April they tried to hack into the headquarters of OPCW, the chemical weapons monitoring body, in The Hague. The four were taken on a bar deed with a car full of electronic surveillance equipment. The Ministry of Defense has since increased the appropriations for cyber warfare and intelligence service, says Bijleveld. Russia denies all charges.

An appeals court decides on a much-debated previous ruling that the government must ensure that greenhouse gas emissions in the Netherlands are reduced by 25 percent by 2020 (see June 2015). The government accepts the message and says it is still possible to reduce emissions sufficiently in time.

Police arrest seven men suspected of planning an “extensive” terrorist act with dynamite belts and firearms. According to the prosecutor, the men had far-reaching plans for an attack aimed at killing many people. Several of those arrested have previously been convicted of attempts to connect to areas in Iraq and Syria controlled by the Islamic State (IS) terror group.

Pedophilia accusations within the Catholic Church

Half of the leading representatives of the Catholic Church in the Netherlands have darkened sexual abuse of children – this is the conclusion of a report that draws the country into an ongoing global scandal within the church. The charges involve 20 of 39 cardinals, bishops and their closest associates between 1945 and 2010. Four of them must have committed abuses, while 16 allowed pedophilia-charged priests to move between different congregations instead. Most of the designated are deceased.

After the Dutch and Turkish foreign ministers meet at the NATO summit in Brussels in mid-July, the countries decide to resume diplomatic relations. Soon, the Netherlands will again have an ambassador in Ankara, while the Turkish ambassador will be in place in The Hague. In spring 2017, a diplomatic crisis arose between the countries after the Netherlands refused Turkish ministers to hold elections in the country (see also February 2018).

The Senate votes with the numbers 40-35 for a law on referendums to be torn down. This means that the last step has been taken to eliminate the controversial 2015 law on advisory referendums on legislation. The law meant that a law could be repealed indefinitely with a simple majority of votes if the turnout was at least 30 percent. Mark Route’s government began work on repealing the law shortly after its entry into force in October 2017. The law was applied in the vote on the EU’s cooperation agreement with Ukraine (see April 2016).

The Senate approves a ban on clothing that covers the face of public places such as schools, hospitals and public transport – but not in the street. The ban has been debated for several years but is now ready to become law. It was adopted by the House of Representatives as early as 2016 and also includes other garments such as hoods and helmets with visors. However, critics believe that the ban is aimed at Muslim garments such as burqa and niqab.

The Netherlands expels two Russian diplomats as a result of a nerve poisoning attack on a Russian former spy and his daughter in the UK in early March. It is taking place in concerted action with some 20 countries, mainly in the EU, in solidarity with the British government accusing Russia of being behind the attack. In total, over 100 Russian diplomats are expelled, 60 of whom are from the United States. Moscow denies all involvement in the poison attack and threatens with countermeasures.

Parliament: Armenians were subjected to genocide in 1915

Members of the House of Representatives, with a large majority, agree that massacres during the First World War on Armenians in the Turkish Ottoman Empire should be called a genocide. Turkey, with which the Netherlands already has cold relations, condemns the parliamentary decision. Ankara opposes the term genocide as it claims that as many Turks as Armenians were killed.

No discrimination target against Rutte

The Prosecutor’s Office announces that there are no indications that Prime Minister Rutte has discriminated against “ordinary people”, as PVV leader Geert Wilders argued with reference to the country’s discrimination law. The case will thus not be investigated further (see also November 2017).

Foreign Minister Halbe Zijlstra resigns after it is revealed that he has lied about taking part in a meeting with Russian President Vladimir Putin in 2006. The opposition led by Geert Wilders ensures that a vote is held in Parliament regarding the confidence of Prime Minister Rutte and his government. Rutte is criticized for not informing Parliament about Zijlstra’s lie, even though he became aware of it all at the end of January. 101 members support Rutte while 43 declare their mistrust of him.

Still chilly between the Netherlands and Turkey

The government announces that the Dutch ambassador to Turkey has officially been withdrawn and that a new Turkish ambassador is not welcome in the Netherlands. Relations between the countries have been bad for almost a year (see March 2017) after a diplomatic quarrel broke out between the countries in connection with the expulsion or refusal of Turkish ministers to enter the Netherlands.

Banks and the tax authorities are exposed to IT attacks

The Netherlands’ three largest banks are exposed to several cyber-attacks that lead to congestion and that the computer systems go down. The tax authorities are also affected. There are suspicions that the attacks are a revenge campaign linked to the information a few days earlier that a Dutch intelligence service was spying on a Russian hacker group.

The Dutch security service AIVD is said to have infiltrated the Russian hacker group Cozy Bear, which is believed to be linked to the Russian government. The AIVD has been spying on the group since 2014 and should have sent information to the US Security Service stating that the group was behind the IT attack on the Democrats ahead of the 2016 US presidential election.

The Netherlands’ highest intelligence chief Rob Bertholee states in media interviews that four terror attacks have been prevented in the last seven years by the security organization AIVD. The latest applied to a Dutch citizen in Rotterdam who was sentenced to four years in prison in November 2017 for planning an attack.