According to official figures, unemployment is only a few percent, but around one third of the workforce is counted as underemployed. Furthermore, a large proportion of the inhabitants are mainly outside the official economy and thus the formal labor market; they live in self-catering and / or are part of a widespread exchange economy.

The employment rate is reflected in, among other things, a large number of seasonal workers. It is mainly residents of the mountain regions who are applying for agriculture in Terai in the south.

Many Nepalese work abroad, mainly in India and in the Arab oil states of the Persian Gulf but also in Malaysia and South Korea. The number of foreign workers was estimated in the 2010s to be between 3 million and 5 million. The harsh conditions for many guest workers gained international attention in 2014 when it was reported by around 400 Nepalese dead in accidents in Qatar, in connection with the build-up to the Soccer World Cup there in 2022. The often slave-like conditions prevailing for domestic service employees have prompted the government to consider that prohibit women under 30 from taking up employment in the Persian Gulf countries.

There are three major national organizations with close ties to political parties. The right to strike is limited, strikes and other union activities can be stopped if they are considered to harm the nation’s interests. The strike ban applies to a number of employees in “important services”, which includes, among other things, banks and hotels. 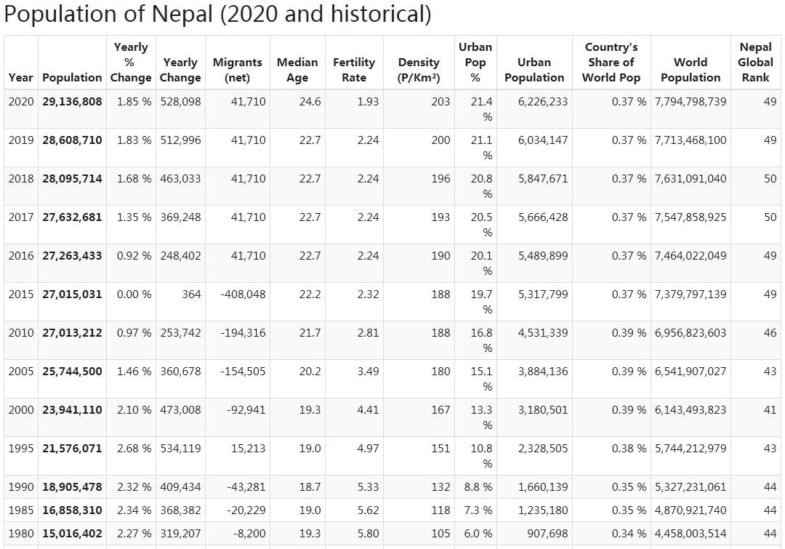 Child labor is common, despite laws designed to limit it. More than 2 million children under the age of 15 are estimated to work, often under dangerous conditions, although prohibited. It still seems that children work in close-to-slave-like conditions by knitting carpets by hand, even though the phenomenon is less widespread than a few years ago.

Pushpa Kamal Dahal, better known by his war name Prachanda, is elected new Prime Minister after receiving support in Parliament by NC. Prachanda has been leader of the Maoist guerrillas and later of the Maoist party UCPN-M formed by the guerrillas when it laid down its weapons. Nowadays, Prachanda leads the new party Maoist center (see May 2016).

Prime Minister KP Sharma Oli avoids a declaration of confidence by resigning just minutes before the vote is to be held in Parliament. In his farewell speech, Oli accuses the Maoist UCPN-M of undermining the government’s work. The rest of the government is still waiting for a new prime minister to be appointed.

The Maoists leave the government

The large Maoist party UCPN-M chooses to step down from government cooperation, which has long cracked down. The Maoists would rather see that the country is governed by “a national consensus government”. As a result, the government loses its majority in parliament.

In response to the formation of a new radical outbreak party among the Maoists, the former Prime Minister Baburam Bhattarai is forming yet another Maoist party, with a more center-left political orientation. The party name is Naya Shakti Nepal.

A breakout group from the Maoist UCPN-M tries to mobilize workers for a general strike, but the campaign degenerates when cars are burned, petrol bombs are thrown and roads are blocked off. Police arrest more than 160 people. The purpose of the group’s actions is to try to get imprisoned party members released.

New demonstrations against the Constitution

Hundreds of people from ethnic minority groups in the south gather in Kathmandu in protest of the constitution, which they believe neglects the country’s southern regions.

The government announces that the delayed reconstruction following the earthquake in April 2015 will be 25 percent more expensive than expected. The cost is estimated at $ 8.4 billion instead of the previously stated $ 6.7 billion. On the one hand, the damage to the houses is said to be more extensive than expected, and on the other, it costs more than estimated to build earthquake-safe schools. Around four million Nepalese still live in temporary housing.

Presidential visit to India is canceled

President Bidhya Devi Bhandari is forced to postpone a planned visit to New Delhi after the government refused to approve the trip.

Nepal calls home its ambassador to India. The reason is that he is suspected to have supported the Maoists’ decision to leave the government and acted to oust Prime Minister Oli. The ambassador was appointed by the previous NC-led government. The attempts to sell Oli are said to have support in India which has close links with NC.

The government has promised every household affected by the earthquake in April 2015 a $ 2,000 allowance to rebuild their house, but so far only 641 families have received a first payout of $ 500.

The economy blows in disarray

Losses in connection with the earthquake in April 2015 are estimated at seven billion dollars, while Nepal’s economic growth in 2016 is estimated to be the lowest since 2007, when the war was still going on (statement from the Asian Development Bank, ADB). Immediately after the earthquake, India, China, the World Bank and ADB promised a total of $ 4.1 billion in emergency aid, but the newly established National Reconstruction Authority was ready to start working in December 2015. Since then, aid agreements total $ 1.85 billion signed.

Schools and health care in ruins

1,227 rural health clinics were destroyed in the April 2015 earthquake. Only 40 of them are rebuilt. Of the nearly 8,000 schools laid in ruins, a handful have been built. The vast majority of pupils today receive their education in bamboo or sheet metal.

One year after the April 2015 earthquake disaster, the death toll was measured at 8,959, while 22,303 people were injured. Nearly 780,000 buildings were totally destroyed, and another nearly 300,000 require extensive repairs. 131 historical monuments were turned into gravel while 560 other such monuments had to be repaired. Restoration of some of these has begun, but the authorities state that it will take several years before all are restored, to the extent that this is feasible.

One year after the earthquake – millions of homeless people

On the anniversary of the devastating earthquake in the Kathmandu Valley (see April 2015), millions of Nepalese are still homeless. Around four million live in temporary housing. 113,384 families have moved back to their old homes that are at risk of collapsing during new quakes. 31,000 families have rebuilt their homes themselves.

Review of the Constitution

The government sets up a committee to examine the disputed parts of the constitution. The review will primarily investigate the border demarcation between the country’s provinces and a report will be presented within three months. The decision to revise comes after Prime Minister Oli visited India, to which the dissatisfied Madhesi people have a close relationship.

The roadblock is lifted

Demonstrators in southern Nepal remove roadblocks and open border crossings to India. The reason is a growing irritation and anger among the locals over the barriers that have prevented border traffic for four months. By then, 57 people have been killed since the violence began in August 2015.